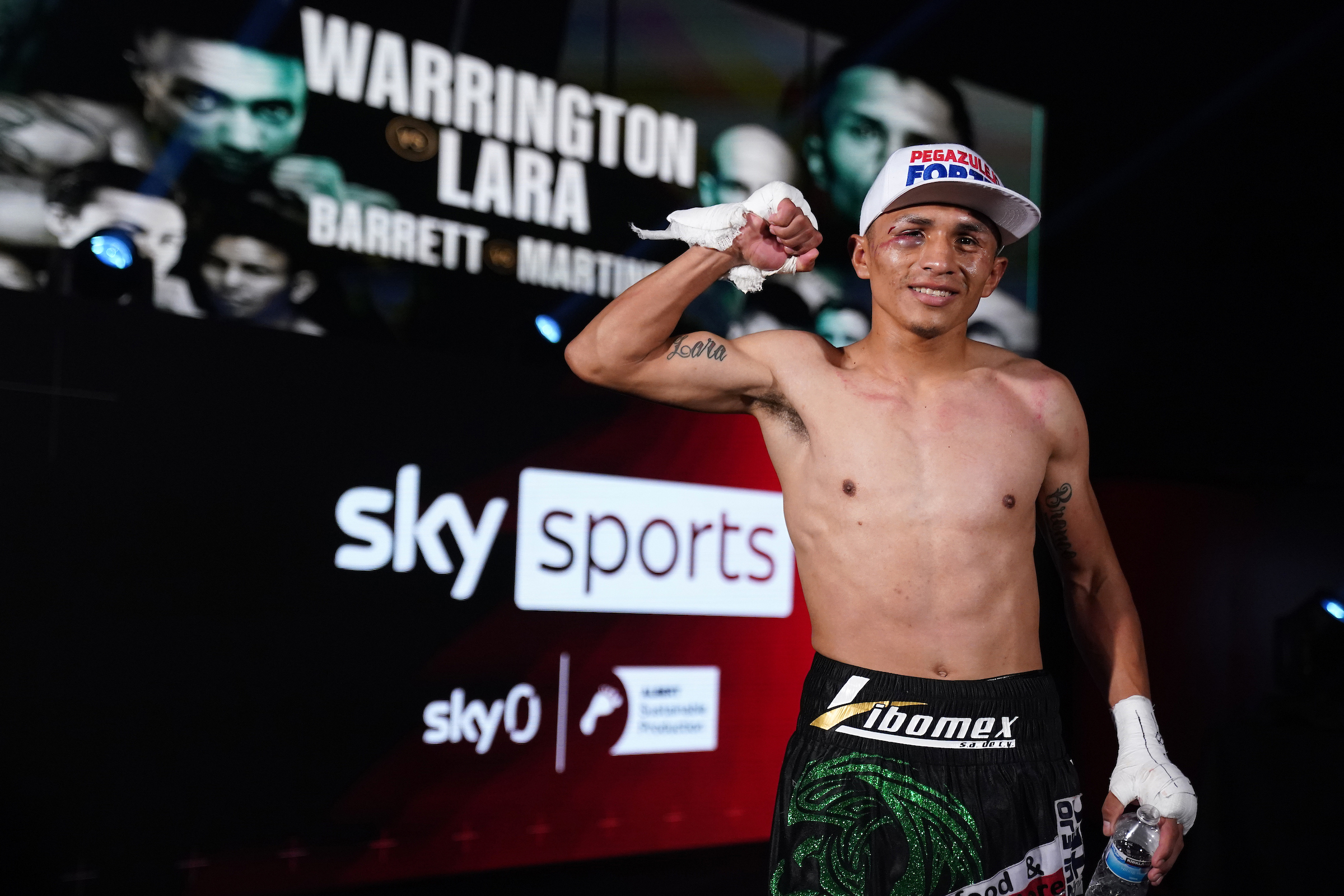 Josh Warrington was floored and ruthlessly finished by Mexico’s Mauricio Lara in a sensational knockout loss that put a dent in the former IBF Featherweight World Champion’s ambitious plans.

‘The Leeds Warrior’ endured a stunning upset defeat as he was dropped and nearly stopped in the fourth round before Lara sent him crashing to the canvas again in the ninth to end Warrington’s unbeaten record.

Lara, 22, landed a heavy knockdown in the fourth round and Warrington struggled to make the bell, his legs barely able to support him. Despite showing grit and huge heart, Warrington was never able to fully recover.

In the ninth, a barrage of left hooks and a hard left hand from ‘Bronco’ sent Warrington toppling to the canvas for a second time and referee Howard Foster waved it off to send shockwaves through the division.

“The reason I performed so well is because of the support of my family,” said Lara. “I think Josh Warrington needed to know that this fight wasn’t going to be easy. He shouldn’t have been making plans for future fights. I am extremely happy at the moment.

“We just had to take our time and wait. He was a great champion, that’s why he continued to fight on and be strong and have good heart. I didn’t want to tire myself out too much. I had to take it round by round and wait for that final blow when it came in the ninth.

“We were very confident in our team in what we could do. Of course, there is a surprise when it actually comes off. We’re happy with our performance. I know I am heavy-handed and that’s what showed during the fight. I’m really really happy. I’m crazy happy.

Zelfa Barrett withstood an aggressive assault by Spain’s Kiko Martinez to seal a career-best victory with a unanimous decision in the chief support bout.

The Mancunian was troubled by the power and strength of Martinez, a former World Champion, but Barrett finished the fight strongly to secure victory with generous scores of 118-111 118 -111 and 116-113.

“That’s my style of boxing, putting pressure on and hit and move,” Barrett told Sky Sports.

“I got cut for the first time and it threw me off but we move on, I got the win. The fight was close and it depends on what you like to see. Some people like pressure, some like boxing. I just did what I was told and listened to my uncle.”

Leigh Wood stopped Reece Mould with a brutal knockout in the ninth round of their clash for the vacant British Featherweight Title.

The Nottingham fighter, now trained by Ben Davison, floored Mould on three occasions, inflicting a final heavy knockdown in the ninth round to secure the vacant Lonsdale belt.

“It feels good,” said Wood. “It’s a really good feeling and I want to say thanks to Ben Davison because he’s made it happen. I hope Nicky Booth is looking down on me with a smile on his face. He inspired me to do it. He wanted me to pick up the gloves. He came down to my awards evening when I was an amateur. This means everything. His story after he finished boxing was pretty said, so I hope I’ve done him proud.

“Reece Mould is a great fighter and I believe he’s already past British Title level, he just came up against a kid who is way above British Title level tonight. I felt for him because I’ve been there. I was there in 2014 against Gavin McDonnell. I know the feeling and it rips your gut out. If he wants to come again, he’ll come again.

“Experience is key. You’ve just got to keep learning. There’s a lot of stigma around staying unbeaten and doing it all in one wrong. You learn more from a loss than a win. You go back to the gym and you analyse, and you work on your weaknesses. I’m living proof of that.

“Coming off a loss I had a lot of doubters. Teaming up with Ben Davison is the best thing I’ve done. He identified all of my strengths and realised what I had to do to get the most out of them. It all came together on the night. I’ve only had eight weeks with him and I got a few tellings off in the corner! I’m still polishing things up but we knew if would be enough on the night.”

Sheffield Super-Lightweight talent Dalton Smith moved to 7-0 (6 KOs) as he displayed his class in a clinical stoppage victory over late stand-in Ishmael Ellis, who did not come out for the fourth round.

‘Thunder’ swiftly broke down the resistance of Birmingham’s Ellis with a punishing assault, ramming in hurtful right hands during the third round. Trainer Jon Pegg didn’t send his man out for the fourth round.

“It was early on in the fight and we had a long way to go,” said Smith. “Respect to his corner for that decision. I’m glad to be back out with another good performance. I think it was one of those fights where it could have been easy for me to take my eye off the ball. This was my third scheduled fight for this event. I had to stay switched on.

“Ellis is an awkward opponent, and if I went out there and tried to rush it I could have made myself look scrappy. I had to be calm and collected, I knew the stoppage would come eventually. Knowing I had those ten rounds, mentally it knew I could relax. I didn’t have to push and go and look for the stoppage. You could see at times I was stepping back. I wanted to enjoy myself.

“I’ve got to thank Ishmael Ellis for stepping in. Without him I wouldn’t of had an opponent. All respect goes to him. I’ve had to adapt to fight every style there is. I feel like I’m going to go all of the way. I’ve still got to get through those ropes and prove that I’m one of the best prospects out there.

“It’s nice to get the credit. It shows my hard work is paying off. I want the Lee Appleyard fight, it’s a local derby and it’s the fight fans want to see. I’ve got a lot of respect for Lee, I’ve know him for a number of years. It would be a good fight for the fans and for my career.”

The unbeaten 20-year-old controlled Mendoza from range, occasionally stepping in to deliver thudding body shots, but the Nicaraguan stood firm until the final bell.

“Like you say, job done,” said Price. “I’d had a lot of months out of the ring and a lot of late pullouts. It was a bit frustrating. It’s the first time I’ve had to deal with that in my professional career. My original scheduled fight was against a much taller opponent, the same height as myself. For it to be changed at the last minute was tricky, You saw how small he was. He was coming in low with his head.

“It was a very good learning curve for me. I picked my shots well. He was down at my knees near enough. I had to catch him when he was on his way back up. I caught him with some good shots. I thought I showed some new things in my boxing. I was boxing on the inside. Overall it was a good performance. I think you’ll really see the best of Hopey Price when the level of oppositions goes up.

“I put the effort in all over Christmas and the New Year. I think all of the sacrifices I have made will pay off in the future. I’ve got a lot of experience in the amateurs and I think that helps a lot. I’m probably one of the coolest people around in the whole arena. As soon as Eddie and Dave say I’m ready to step-up, then I’ll step-up.”

“I thought I did well.” said Nadim. “I just took my time and tried to outbox him. When he got tired I put it on him. I was expecting him to come out fast but I think he tried to save himself for the later rounds incase he needed it. I was planning to box him. In my first two fights I came out too quick and I was getting hit with silly shots. I took my time and paced it. I thought I did well. A lot of people thought it would be a close fight. I outboxed him easily. I needed a fight like that just to see where I’m at.”