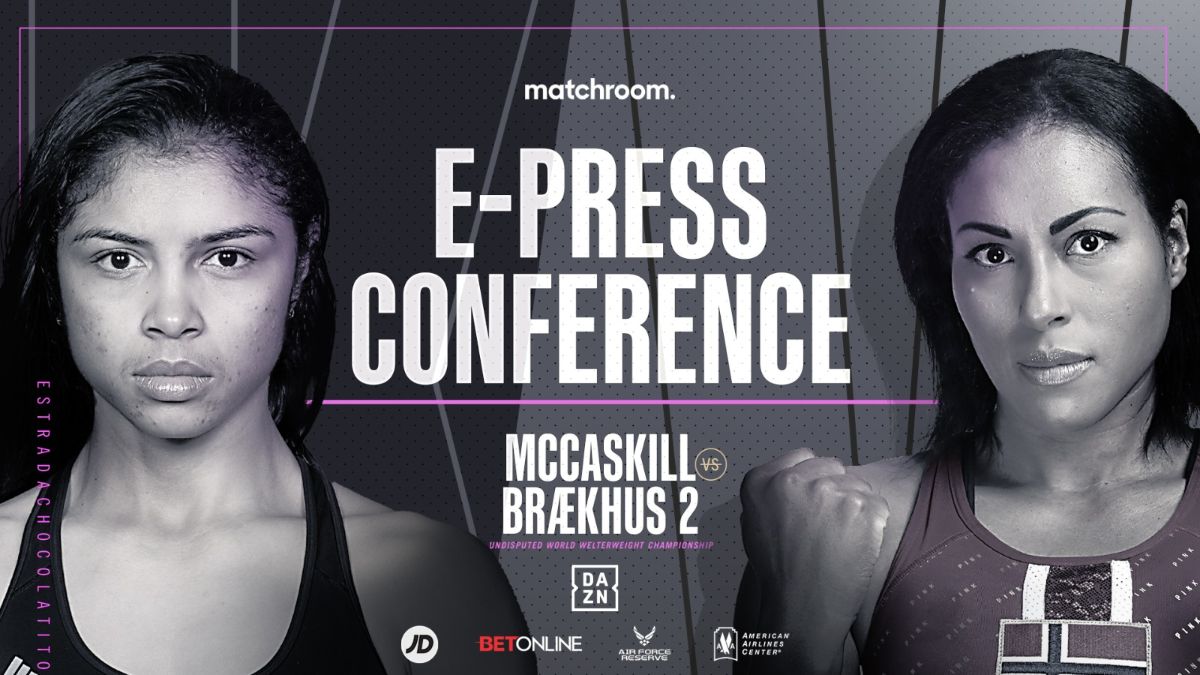 “Shame on your team for not preparing you mentally for defeat and shame on you for pretending to be the victim. You have to be the champion you say you are,” Jessica McCaskill

Jessica McCaskill and Cecilia Brækhus ramped up their rivalry in a fiery e-press conference ahead of their rematch for the undisputed World Welterweight title at the American Airlines Center in Dallas, Texas, on Saturday March 13, live worldwide on DAZN.

TICKETS FOR ESTRADA VS. CHOCOLATITO ARE ON SALE NOW FROM TICKETMASTER – TICKETS START AT $35 (PLUS FEES)WATCH MCCASKILL AND BRÆKHUS’ E-PRESS CONFERENCE HERE ON MATCHROOM’S YOUTUBE CHANNEL

McCaskill (9-2 3 KOs) ripped the titles from Brækhus (36-1 9 KOs) on the streets of downtown Tulsa, Oklahoma in August as Matchroom returned to action in the US, and now it’s McCaskill putting the belts on the line and Brækhus is looking to avenge her first pro defeat.

Promoter Eddie Hearn sat them down as the date ticked over to under a month to go to the rematch, and after Hearn’s initial questions to both fighters, tensions rose and the Chicagoan and Norwegian could have been back in the ring as the traded verbal blows back and forth to light the blue touch paper ahead of the return bout.

“I feel the last fight was the last one of her career,” said McCaskill. “Once someone shows that weakness, shows they are not in it and alludes to retirement, that shows that they are mentally out of the game.

“We’ve never been given a whole lot, we’ve taken really big risks and they have gotten us to those higher places, I haven’t been given anything, I don’t want to take on anyone else’s legacy, I’m building my own and making history every step of the day and that’s what I want to continue to do.

“I feel great – every time I have had to fight for a belt, it’s been from a champion, Cecilia, you have fought for vacant titles, I’ve had to take mine from everyone I fought from, I’ve never just fought for a vacant title and it’s heads or tails on who is going to win it.

“I’m not saying I don’t get the credit for my last fight, but over the time that I’ve fought and the different hurdles that I have crossed, that’s what I don’t think I get the credit for, that’s not to make excuses. Everything I say is the truth, I don’t talk trash.”

“I felt I won’t the fight, it was very close, I could have got the decision,” said Brækhus. “A lot of people thought I won and it’s not the way to lose your belts.

“I know I am a better fighter than Jessica, I had a bit of an off day, but I feel I did what I needed to do to retain my belts, but I was not at home I was on her home turf and she got the belts.

“She says that people are hating on her because of the way she got the belts, they aren’t hating but people aren’t satisfied because that’s not the way anyone should become an undisputed champion, it should be harder than that. I don’t think she has a good feeling the way she won the belts.”

McCaskill and Brækhus clash on a massive night of action in Dallas with a triple header of World title action.

Topping the bill is another mouth-watering rematch as Juan Francisco Estrada (41-3 28 KOs) and Roman ‘Chocolatito’ Gonzalez (50-2 41 KOs) finally meet for the second time eight years after their first bout, this time in a unification for the WBC, WBA and Ring Magazine World Super-Flyweight titles.

There’s a Matchroom debut on the card for Hiroto Kyoguchi (14-0 9 KOs) as he defends his WBA and Ring Magazine World Light-Flyweight titles against Axel Vega (14-3-1 8 KOs).