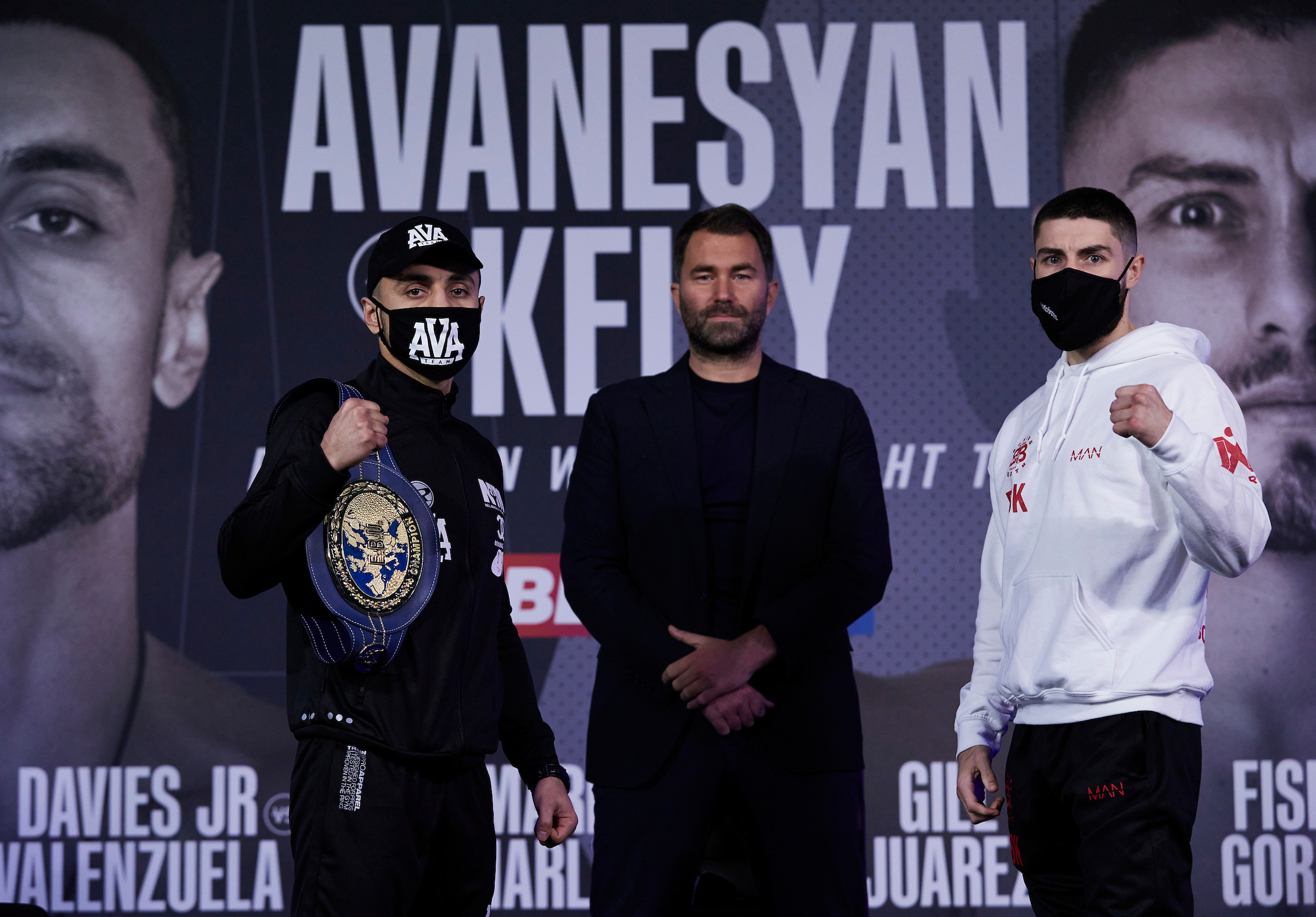 “Wow. We’re just about catching our breath after an incredible night of boxing last Saturday here at The SSE Arena, Wembley live on Sky Sports across the UK and DAZN all around the world. Last Saturday was special. Last Saturday reminded us why we love the sport of boxing. The pain of defeat, the harrowing silence of Josh Warrington’s shock defeat at the hands of Mexico’s Mauricio Lara, which has spurred on a nation of fighters, particularly Cesar Juarez and Gabriel Valenzuela as well.

“What a thrilling night from top to bottom. For me, this Saturday I think we have one of the cards, and one of the main events in particular, that I haven’t looked forward to like this for a long long time. This is a brilliant night of boxing, and we’re so pleased to be keeping the sport going, keeping the momentum going, and we can’t thank our partners enough, across the board, Betfred, JD, Wow Hydrate and of course Sky Sports and DAZN. This sport is getting bigger and bigger. This is just the start of a huge year for us.”

Josh Kelly – Sunderland, England – 10-0-1, 6 KOs – challenging David Avanesyan for the European Welterweight Title:“I’ve got great respect for David, and I’ll just echo what he said, family and health is the most important thing. We’ve got to get a job done on Saturday. It’s my main aim in 2021 to start off with this European Title. I’ve stepped up to levels that I couldn’t even imagine I could do in the gym. I thought last time I was ready, but COVID came and it got cancelled. I was nowhere near ready compared to what I am now. All I need to do is go and put a show on on Saturday. I’ve done a lot of talking this week and I feel like I’ve expressed myself  fully on what I believe will happen. We’ve just got to do the dance on Saturday. I think David is a strong capable fighter. I believe that I’m a big Welterweight, and I’m strong. I’m a very strong Welterweight. Saturday night is going to be a night for everyone to enjoy I think. Now it’s time to quiet down, focus in and get the job done.”

“I am more ready than I have ever been before. I couldn’t wait for this day after my injustice that they did to me in my last fight. I couldn’t wait to step into the ring again to show what I’m about. I’m really happy that Rylan is undefeated. People think that he will cause me real problems. This is the fight that I want. I don’t want fights where people expect me to wipe out my opponents fast. I’m going to do this against Charlton, but people aren’t expecting me to do it. I feel very good. The people can think what they want. I’m in my best shape ever, and on Saturday you will see what I’m going to do. I have changed many things in my game-plan. The fans want to see the knockout and the aggressiveness. I don’t think Rylan will stay toe to toe with me.”

“I’m just going to get in there, do what I do best, and if Florian wants to come and meet me in the middle, he’ll be thinking otherwise when I land a shot. He’ll be on the back foot, 100%. It’s a massive opportunity. The Laws fight, people still don’t know enough about me because I only got in there and did three rounds. This is going to really get my name out there once I beat Marku. It’s similar to the Laws fight, he’s just a big ticket seller. I’ve already done one big ticket seller, and now I’m going to do another big ticket seller. Then I’ll be the big ticket seller! I think he’s going to be more cautious because it’s over ten rounds. He can’t afford to come running at me. If he does come running at me then he’s going to walk onto the Pint Size power! It’s as simple as that. I could knock him out yeah, easily. We’ll have to wait and see. It could be points or a knockout. The win is all I focus on.”

“I’m looking forward to being back. Make no mistake, what happened last week is not going to be happening this week. I’ve been preparing for a long time, even with the pandemic I’ve stayed in the gym, kept ticking over. This fight has come around at the right time. Come Saturday night I’m going to do a job. With me joining the new gym, I thought I’d use this time to learn more on my craft and the Ingle way with Dom and the team. I think being in the gym all of the time is probably going to benefit me more than it would have done if I’d have just jumped back in the gym eights weeks ago. I’ve seen glimpses of him and he seems like a good fighter. He’s very capable. Like I say with all of my opponents, I don’t watch too much of them and I don’t analyse too much. I leave that to my team. I’m sparring with world level guys like Kid Galahad and Liam Williams in the gym. Whatever he brings to the table I’m going to be ready for it.”

“Obviously it is a huge motivating factor, that Mexico have come over here and caused an upset in another country. We’re going to repeat that on Saturday. We want to make sure we finish this with a KO because we don’t want to leave anything to the judges. We know that there has been some cards that have not been fair to the away fighters, so we don’t want to leave it to the judges on this occasion and we want to go for the knockout. We want to put ourselves on the map and climb up the rankings. We are really motivated. Thanks to Eddy Reynoso for this opportunity to come and represent Mexico in this country.”

“It’s brilliant to be here. It’s a great opportunity for me. I put a lot of hard work in, and now I’ve got to put it all on the line on Saturday night. I bring a lot of supporters with me. I’ve got a great support network behind me which I’m really thankful for. When it comes to Saturday night, it’s just me and Matt Gordon in the ring. I’ve got to show him what I’m about, and I’m going to do that. I’ve got some great experience under my belt in terms of sparring. Now I’m with Mark Tibbs and Steve Andrews I’m really in a good place. I’ve got to get my experience on the job, and I really mean it. It all starts on Saturday. I’ve got to show what I’m about on my debut. Of course there’s nerves, but that’s where I thrive, under that pressure. I’ve watched Matt and he gives people good fights. I’ve got a lot of respect for him, but he’s got to realise that when I come in on Saturday night I’m going to be on the top of my game. I’ve trained like a dog since August and I’m ready to go.”

“I know he’s coming to do the business. I’m here to do the business as well. May the best man win on the night. Obviously I’m going to try and take any chance that’s there. I’ve done a few of these lockdown shows. I feel like I know what to expect with no crowds there and whatever else. I haven’t really heard much about Johnny Fisher to be honest. I’ve heard he’s quite aggressive and game. I’ve seen him saying that he wants to box as much as he can. If he comes and boxes that will be lovely. We’re ready for both styles to be honest. I’ve got a lot to prove myself. My record has not been the best in my last few fights against these prospects. I need to try and have a little turnaround myself. I’ve not set out to be a journeyman but my record is suggesting otherwise at the minute. I don’t come to lose.”

“I’m absolutely buzzing. I’m just happy to be out of the house. When the call came I grabbed the opportunity with both hands to be in the ring with Cesar Juarez. He’s an established world level fighter. He’s been in with some massive names, Nonito Donaire, Angelo Leo in a World Title eliminator and Carlos Castro. All of these guys are top fighters. Isaac Dogboe as well. I’m excited to be back and I’m excited to put on a show. I feel like when you’re not fighting as often as you would like to during a pandemic, you need to take bigger steps. This is a big step. I understand that. There’s a massive threat posed to me on Saturday night. I expect to pass this test with flying colours. I’m expecting a hard fight, but I think it’s going to be an entertaining one. This will push me onto big things.”

“I am ready. I am feeling really strong. I didn’t come all of this way to lose. Every time you have Mexican fighters come here they have great values. They have lots of hunger and they come to win. If you look at my nickname, my nickname is ‘Corazon’, and that says it all really. I come for war.”