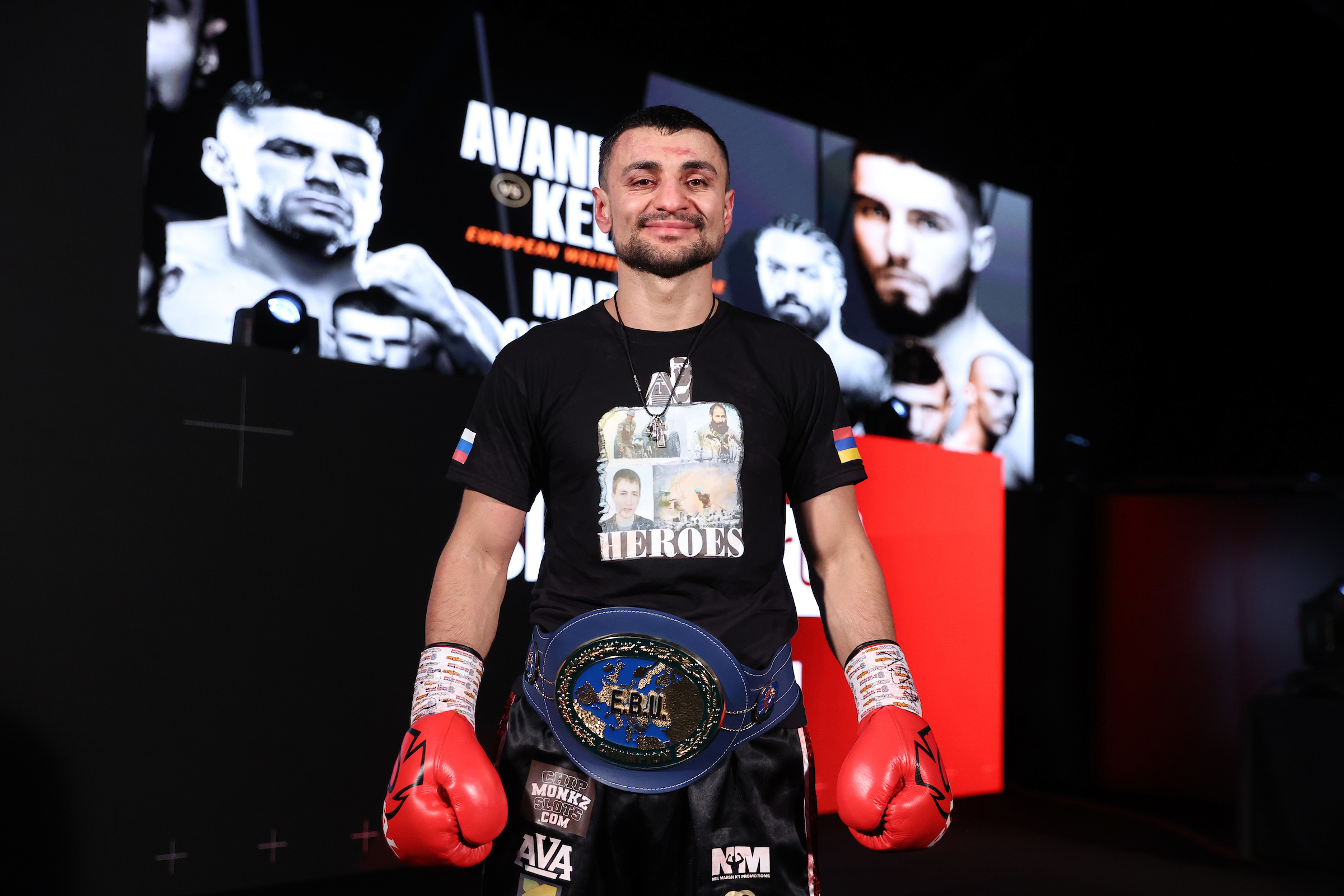 David Avanesyan stopped Josh Kelly in six rounds at The SSE Arena, Wembley to retain his EBU European Welterweight Title, live on Sky Sports in the UK and on DAZN in the U.S. and more than 200 countries and territories.

Sunderland’s Kelly suffered his first professional defeat at the hands of Avanesyan, the relentless Russian champion, who forced Kelly’s trainer Adam Booth to throw in the towel after two knockdowns in a punishing sixth round.

Avanesyan had been made to wait for Kelly, with the fight twice postponed, but his sustained assault broke down the 26-year-old’s resistance, with British rival Conor Benn watching from ringside as part of the Sky Sports team.

“I feel very very good,” Avanesyan told Sky Sports afterwards. “I waited a long time for this fight. I put a lot of hard work into this fight. I came to join my coach and my manager from another country. I’ve had long spells away from my children. I miss them. I haven’t seen my children, my parents and my friends for a long time.

“Thank you to my team and to the English fans for giving me this opportunity. Thank you to Matchroom, they put on the number one best show. I’ve had many big nights against the likes of Shane Mosley and Lamont Peterson, but this one with Matchroom is number one.

“I am very happy. Thank you to god for my win today. Thank you to my manager and my coach. Carl sacrificed a lot of time with his family for my training. He has been my friend, my driver and my coach. I don’t like to speak too much. This is business. I know Josh is fast. I am fast too. Boxing is difficult. When you lose, many people think you are finished. This is boxing, you go down. This is life. I will wake up tomorrow morning a champion.”

Trainer Carl Greaves said: “I told everybody this would happen and they all thought I was a crazy coach who knows nothing. I knew exactly how it was going to go. I’ve spent over five years with David now. I’ve seen so much. I’ve seen all of these talented kids keeping him off for a certain amount of time, 30 seconds to a minute, but he finds a way every time. I was so confident in this fight. I knew it was going to go like that. I’m a bit gutted because I had £500 on round seven!”

Florian Marku climbed off the canvas to stop Rylan Charlton in eight rounds in the evening’s chief-support bout.

‘The Albanian King’ toppled to the canvas in the sixth round, but then forced the stoppage with a ferocious response and called for a future clash with Benn, who was watching from ringside as part of the Sky Sports team.

Charlton was punished with stinging counters in the third, and the Norwich man appeared in serious trouble when he staggered through the closing seconds of the fourth following a big right hand from Marku.

Uncorking an eye-catching uppercut, Marku appeared in complete control in the fifth, but he suffered a shock knockdown in the next round after a looping left hand from Charlton. Marku ripped in punches in round eight with savage intent on the weary Charlton, prompting the towel to be thrown in.

“I am really happy,” said Marku. “A lot of people thought that he would humiliate me and knock me out, but I showed that I can box. I will learn a lot from this fight. Three weeks before the fight, I dislocated a finger in my left hand. My team and all of the staff know that I was injured but I was never going to pull out of the fight. I came here to fight.

“After the fifth round I started feeling my hand. It was not a problem. I am happy about the performance. Rylan took so many good hits in the head. He took a lot of punishment. I was beating him and I was talking to him. I told him I was going to beat him and talk to him. I was telling him I’m not Joe Laws. I take the win and we go forward.

“His face was swollen and it was a good decision from his corner. He took a lot of punishment. I love to fight, this is my life. Thanks to the UK fans that believe in me. They like to see me fight. I love pressure. I’ll fight whoever my team S-JAM boxing decide next. Sam Jones and Adam Morallee got me into this position. I have the best team around me.”

Gabriel Valenzuela picked up the biggest win of his career on his first trip to the UK as he claimed a majority points decision over Liverpool’s Robbie Davies Jr to earn the vacant IBF Intercontinental Super-Lightweight Title.

Mexico’s Valenzuela dropped Davies Jr with a straight right hand in the third round, and while Davies battled back in the middle rounds, ‘Nini’ closed the show in the final round when he looked close to forcing the stoppage.

Davies Jr, the former British and European Super-Lightweight Champion, struggled to deal with Valenzuela’s heavy hands, and was an easy target for the 26-year-old from Guadalajara, who was inspired by Mauricio Lara’s shock win over Josh Warrington last weekend.

Popular Romford Heavyweight Johnny Fisher got off to the perfect start in the professional ranks with a powerful first-round stoppage of Matt Gordon.

‘The Romford Bull’ marked his pro debut with a destructive display as he floored Gordon on two occasions in the opening round.

Fisher made a fast start, throwing crunching combinations from the opening bell, and a string of right hands sent Gordon toppling onto the ropes.

Sensing the finish was near, Fisher quickly clubbed Gordon back to the canvas, and referee Ian John-Lewis soon waved off the fight.

“All credit to Matt Gordon, but I bowled him over in one round. Normally Heavyweights are doing it in two, three or four rounds, so I’ve done a good job. Nobody needs to get unnecessarily hurt. I knew that I had him hurt when I first got him down. It was only a matter of time, so the ref did the right thing.

“I felt right and I felt comfortable, more comfortable than any of my amateur fights. I belong here, and I’ve got to prove that I belong here every time I fight. I’ve got a very long way to go, I know I’m only just beginning. Let’s just see how far we can go. I live and breathe boxing. I love training. I’d do it every single day of the week if I was allowed. I’ve got great people around me. There’s things I need to work on but I’ve showed my power tonight.”

The 26-year-old from Chatteris showcased slick skills against the relentless aggression of Juarez as he earned a unanimous decision with scores of 98-92, 98-93 and 96-94.

“It was a very tough test,” said Gill. “He was so tough. I hit him with some great shots. He hurt my hand on his head. I always seem to hurt my right hand. We move on. There’s bigger and better things to come now. It was a great fight and I was pleased to be involved in it. I stood up to his body shots and pushed forwards. I had to pick my spots with him.

“The thing is with these guys, if you work with them, then you’re going to lose all day long. We saw that last week with Josh Warrington. At certain times it’s impossible to get away clean. I did it smart and I tried to keep safe at all times. I didn’t feel my sharpest to be honest, I felt sluggish. I felt like I was leaning in with the shots. I was falling in with the jabs, I didn’t feel like I was pinging it like I normally do.

“There’s no excuses, I did everything in the gym and I worked very hard. I did the weight very well, especially considering I had two weeks’ notice for this fight. It shows my dedication to the sport and it shows how many sacrifices I made. I stayed in the gym over Christmas. I stayed in the gym over New Year and missed out on lots of baking my wife! I’m going to go home, have a week off and do some baking with my wife. If I get a shot at the European Title next then I’d be over the moon, whoever it’s against.”