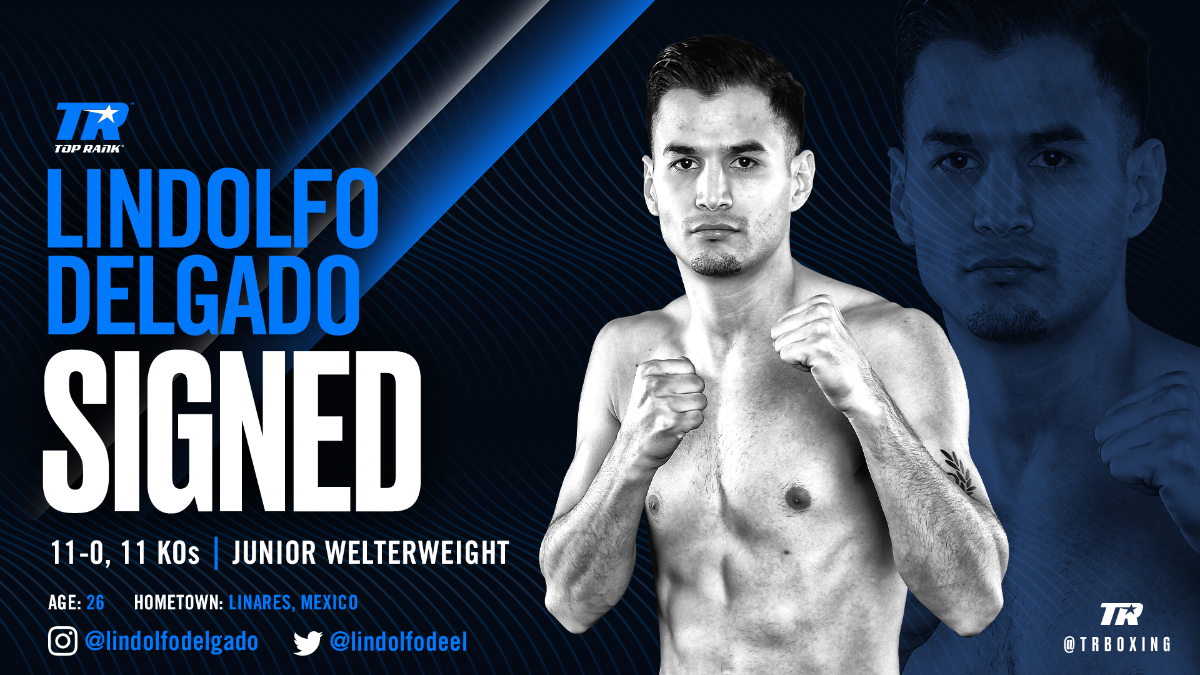 (March 9, 2021) — Lindolfo Delgado, a 2016 Mexican Olympian who is 11-0 with 11 knockouts as a professional, has signed a multi-year contract with Top Rank. The junior welterweight sensation is managed by Rick Mirigian, advised by MTK Global, and trains with Robert Garcia in Riverside, Calif.

Delgado, who hails from Linares, Mexico, will make his Top Rank debut May 22 on the undercard of the undisputed junior welterweight world title showdown between WBC/WBO champion Jose Ramirez and IBF/WBA champion Josh Taylor.

“Lindolfo Delgado has only begun to scratch the surface of his boundless potential,” said Top Rank chairman Bob Arum. “I believe he is going to be Mexico’s next great champion, and I can’t wait to see him in action May 22.”

“I would like to thank Bob Arum, Rick Mirigian and MTK Global for working so hard to make this happen,” Delgado said. “It is a great honor to fight on a card like Ramirez-Taylor, and I can’t wait to put on a spectacular performance for the fans on May 22. I represent Mexico with great pride, and I want nothing more than to bring a world title home.”

Mirigian said, “There is no doubt in my mind that Delgado is a future world champion at junior welterweight. With Top Rank to develop him through the next chapter of his career, the sky is the limit. He has movie-star looks and crossover appeal in both Mexico and the United States, and with Robert Garcia in his corner, he is in the best hands.”

Delgado, 26, went 139-15 as an amateur and turned pro soon after losing his opening bout at the 2016 Rio Olympics. His aggressive style proved more suited to the professional game, as he knocked out four of his first five opponents in three rounds or less. In March 2019, Delgado shined on the Errol Spence Jr.-Mikey Garcia undercard, knocking out James Roach with a left hook to the body in the opening round. He last fought in September 2019 on the Spence-Shawn Porter card, battering Jesus Zazueta Anaya en route to a sixth-round TKO.