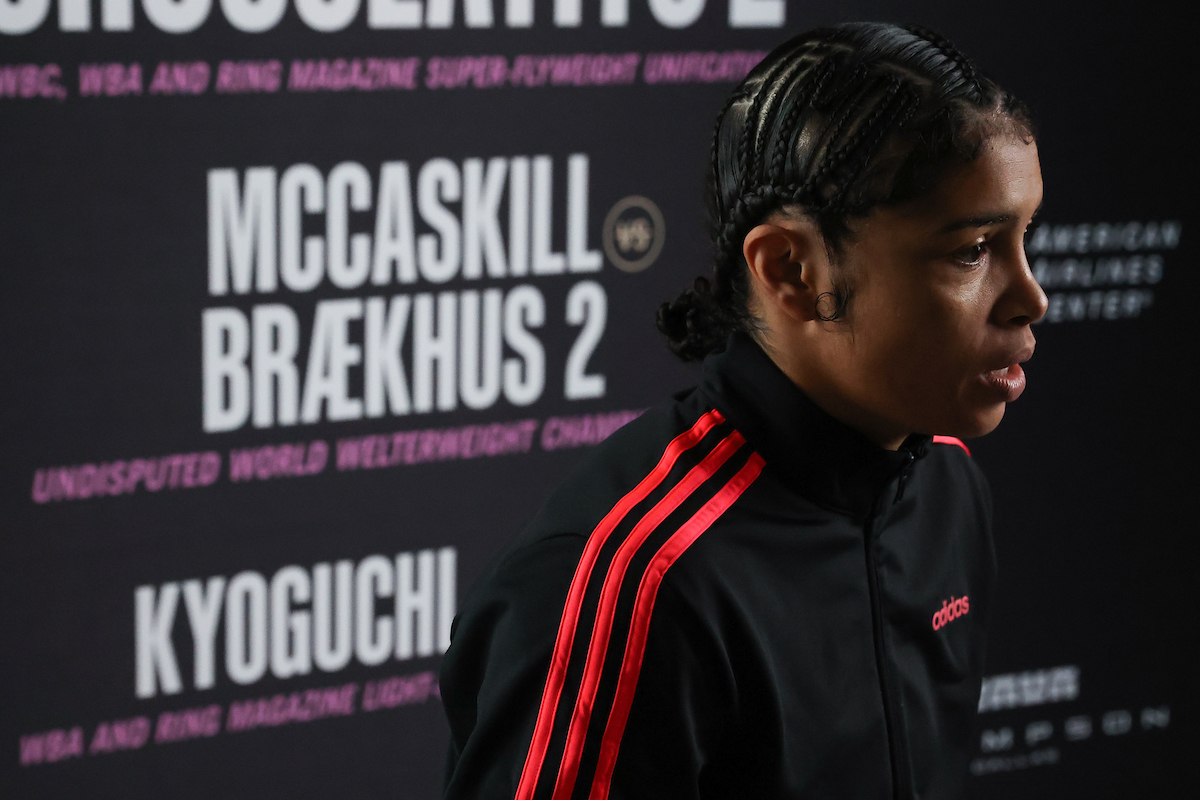 Jessica McCaskill is ready to send Cecilia Brækhus into retirement when she defends her undisputed World Welterweight titles at the American Airlines Center in Dallas, TX on Saturday night, live worldwide on DAZN.

TICKETS FOR ESTRADA VS. CHOCOLATITO ARE ON SALE NOW FROM TICKETMASTER – TICKETS START AT $35 (PLUS FEES)
McCaskill (9-2 3 KOs) ripped the titles from Brækhus (36-1 9 KOs) on the streets of Tulsa, Oklahoma in August, handing the Norwegian her first career loss and becoming a two-weight World champion in the process.

Brækhus hinted at retirement in her post-fight interview before committing to the rematch days later, and now the pair will tussle for the titles once more – but the Chicago belt holder believes that the hunger has gone from her foe and that this weekend, she’ll blow the candles out on her long career.

“This is the biggest retirement party DAZN has ever hosted – there’s probably going to be cake and juice afterwards,” said McCaskill. “This is going to be it. She’s the one that alluded to it after losing in Tulsa, she seemed super relieved after losing and I am just giving her what she wants.

“Once someone shows that weakness, shows they are not in it and talks retirement, that shows that they are mentally out of the game. We’ve never been given a whole lot; we’ve taken really big risks and they have gotten us to those higher places. I don’t want to take on anyone else’s legacy, I’m building my own and making history every step of the day and that’s what I want to continue to do.

“I think she’s been struggling since the loss; I don’t know what she is going to do on fight night because we’re coming. I have a b-side mentality, we’re grinding for this, we’re not getting any handouts for this, she’s going to have to fight tooth and nail for anything.”

Brækhus’ clash with McCaskill is part of aa huge night of action in Dallas, with a mouth-watering triple-header of World title action at the top of the bill.

Juan Francisco Estrada (41-3 28 KOs) and Roman ‘Chocolatito’ Gonzalez (50-2 41 KOs) meet in a mouthwatering rematch that’s over eight years in the making, with the WBC, WBA and Ring Magazine World Super-Flyweight titles on the line and there’s a Matchroom debut on the card for Hiroto Kyoguchi (14-0 9 KOs) as he defends his WBA and Ring Magazine World Light-Flyweight titles against Axel Vega (14-3-1 8 KOs), and it’s a huge night for a clutch of rising talents on the bill.

Raymond Ford (8-0 4 KOs) has been in hot form, closing 2020 out with impressive stoppage wins in Florida and Texas and the 21 year old takes on unbeaten New Mexico talent Aaron ‘Angel Baby’ Perez (10-0 6 KOs) over eight rounds.