Josue Vargas, Joseph Adorno and Xander Zayas among those scheduled to appear on the ESPN+-streamed undercard 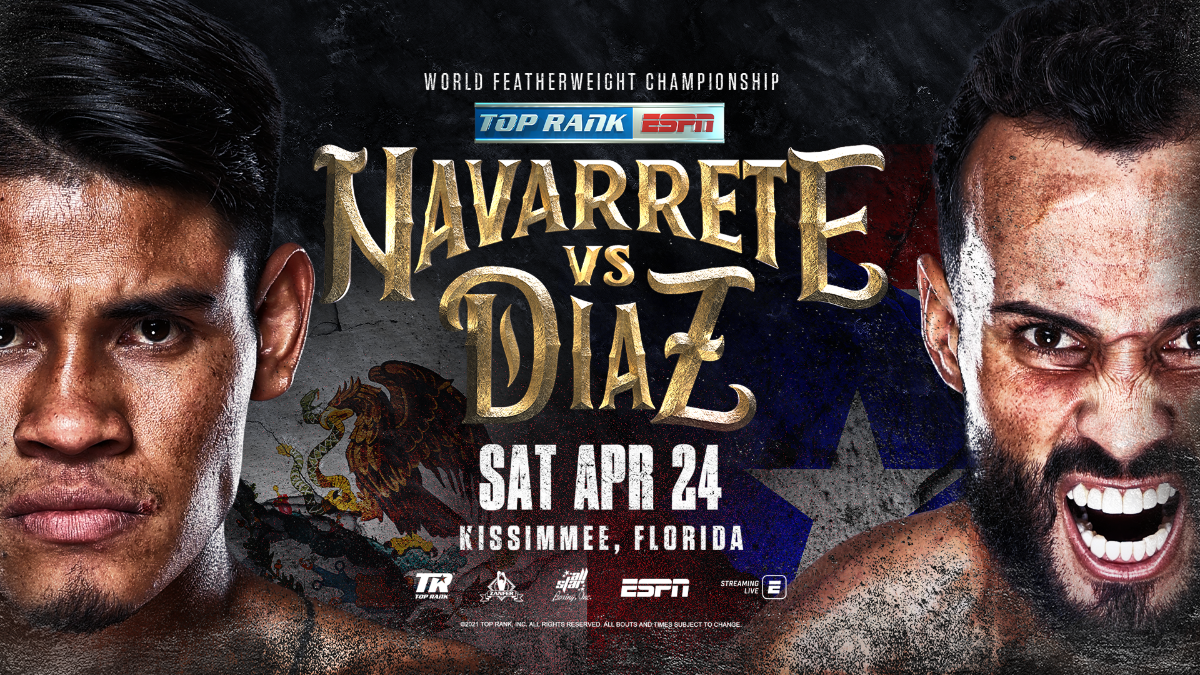 In the co-feature, super middleweight Edgar “The Chosen One” Berlanga, 16-0, with 16 first-round stoppages, will step up in class against Demond Nicholson in a bout scheduled for eight rounds (or much less).

Promoted by Top Rank, in association with All Star Boxing and Zanfer Promotions, Navarrete-Diaz and Berlanga-Nicholson will air live on ESPN and ESPN Deportes (simulcast on ESPN+) at 10 p.m. ET/7 p.m. PT, with undercard bouts to stream live and exclusively on ESPN+. Ticket information will be announced shortly.

“The sensational Emanuel Navarrete wanted a formidable opponent for his first featherweight title defense, and Christopher Diaz fits the bill,” said Top Rank chairman Bob Arum. “We are also thrilled to have Edgar Berlanga back on ESPN, as he is the most devastating young puncher I’ve seen in ages.”

Navarrete (33-1, 28 KOs) burst onto the world scene in December 2018, battering Isaac Dogboe over 12 rounds to win the WBO junior featherweight world title. He is 7-0 since then, including five title defenses, all by stoppage. Navarrete moved up to featherweight and picked up the vacant WBO world title last October with a unanimous decision over the previously undefeated Ruben Villa. Diaz (26-2, 16 KOs) is not unbeaten, but he is battle-tested, having challenged Masayuki Ito for the WBO junior lightweight world title in July 2018. He lost to Ito by unanimous decision and has gone 3-1 since moving down to featherweight. Diaz rebounded from a 2019 points loss to Shakur Stevenson, besting former world title challenger Jason Sanchez over 10 rounds last June inside the MGM Grand Las Vegas Bubble.

“I am a fighter who likes to face the best, and my challenge now is to beat the tough ‘Pitufo’ Diaz,” Navarrete said. “I know he is a good fighter, and I am sure we will give a great show to the people of Florida and to those watching us fight on ESPN, ESPN Deportes and ESPN+. On April 24, I will show that I am the best featherweight in the world. I will not let him take my championship to Puerto Rico. That belt will stay with me in San Juan Zitlaltepec, Mexico.”

Berlanga broke out as boxing’s consensus 2020 Prospect of the Year, impressing fans and media with his string of first-round routs against increasingly difficult opposition. Last July, he knocked out veteran spoiler Eric Moon in 62 seconds, and less than three months later on the Vasiliy Lomachenko-Teofimo Lopez undercard, he became the first man to stop 30-fight veteran Lanell Bellows. Berlanga finished his whirlwind 2020 on Dec. 12, stopping the normally durable Ulises Sierra (15-1-2) in 2:40. Nicholson (23-3-1, 20 KOs) has won five consecutive fights since a seventh-round TKO loss to Jesse Hart in April 2018.

“I don’t like to make predictions, but make sure you tune in. I want to show out for the fans in attendance,” Berlanga said. “April 24 is going to be the beginning of a huge 2021 for my team. I take it one fight at a time, and this is just another step toward my goal of becoming a champion.”

Nicholson said, “I have the experience. When I first started, I was knocking everyone out in the first round as well. I have 20 knockouts, and that speaks for itself. If you look at his opponents, I’d knock them all out. Is he ready for the next level? He might be ready, but he won’t be ready for me.”