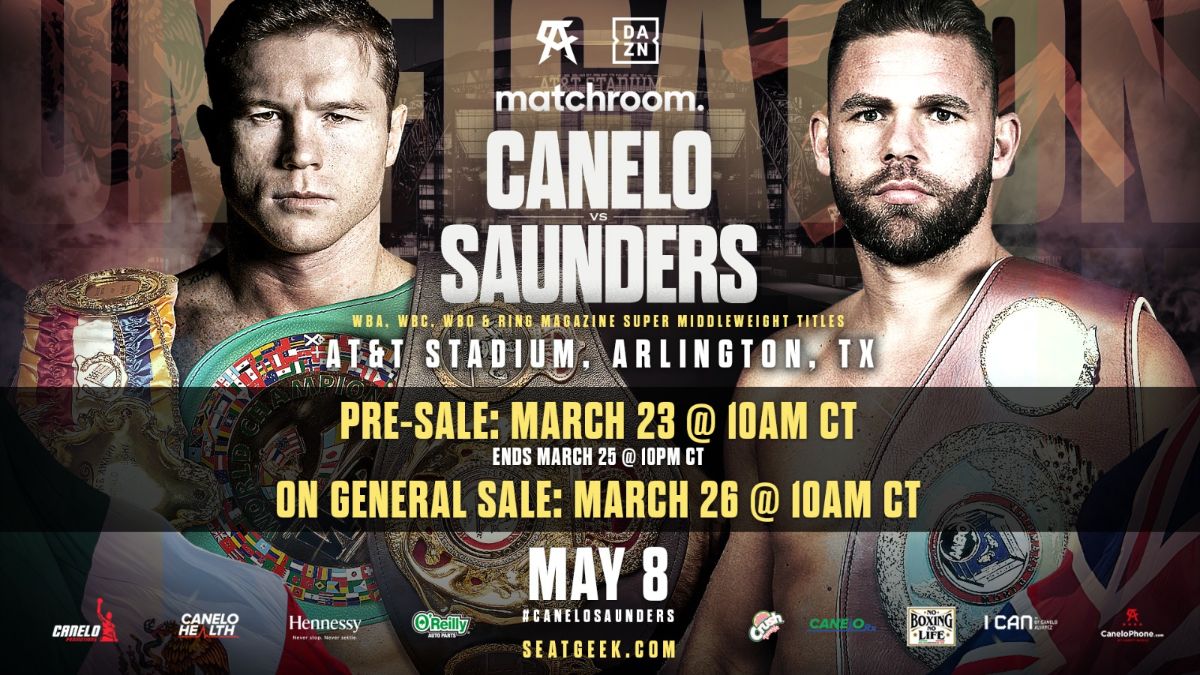 Over 20,000 tickets were sold on a record-breaking day one of the limited pre-sale for the blockbuster unification showdown between Canelo Alvarez and Billy Joe Saunders on Saturday May 8 at AT&T stadium in Arlington, TX, live worldwide on DAZN.

Canelo fights at the home of the Dallas Cowboys for the second time in his career and returns to his traditional Cinco De Mayo weekend date after COVID robbed him of that in 2020.

The Mexican superstar is aiming to take a massive step to becoming the first 168lb undisputed champion from his homeland and the stakes couldn’t be higher, as if he hands Saunders a first career defeat and takes his WBO crown, just one piece of the puzzle will remain.

Saunders, who will be completing his training camp in Las Vegas, will be looking to stop the rot for British fighters facing Canelo and grab the biggest win of his career to date against the 30 year old – it’s an occasion that has already captured the attention of fight fans, and promoter Eddie Hearn believes we’re heading for something special on May 8.

“Today we have seen record breaking numbers for what promises to be a huge celebration on Cinco De Mayo weekend,” said Hearn. “Canelo fighting on Cinco De Mayo has become a staple of the boxing calendar, and I am honored to be promoting this captivating fight at the home of the Dallas Cowboys.

“With one more day of pre-sale to go before the tickets go on general sale on Thursday morning, I am confident that we’re going to have a full house in the Lone Star state for one of the most important fights of 2021.”

Tickets starting from just $40 (plus fees) remain on pre-sale until 10pm CT on Thursday March 25, and tickets then go on general sale at 10am CT on Friday March 26 at SeatGeek.com.

About AT&T Stadium:
AT&T Stadium is one of the largest, most technologically advanced entertainment venues in the world.  Designed by HKS and built by Manhattan Construction, the $1.2 billion stadium features two monumental arches, the world’s largest HDTV video board cluster, an expansive retractable roof and the largest retractable end zone doors in the world.  Features of the stadium include seating for 80,000 and expandability for up to 100,000, over 300 luxury suites, club seating on multiple levels and the Dallas Cowboys Pro Shop, open to the public year-round.  The stadium is also home to a world-class collection of contemporary art, made up of over 50 pieces from an international array of curated artists displayed on the walls and in the grand public spaces of the venue.  In addition to being the Home of the Dallas Cowboys since opening in 2009, the stadium has hosted Super Bowl XLV, the 2010 NBA All Star Game, the 2014 NCAA Men’s Basketball Final Four, the 2015 College Football Playoff National Championship Game and the annual Goodyear Cotton Bowl Classic. The venue has also played host to high school and college football, concerts, championship fights, international soccer matches, and other special events.  For more information, go to http://www.attstadium.com.