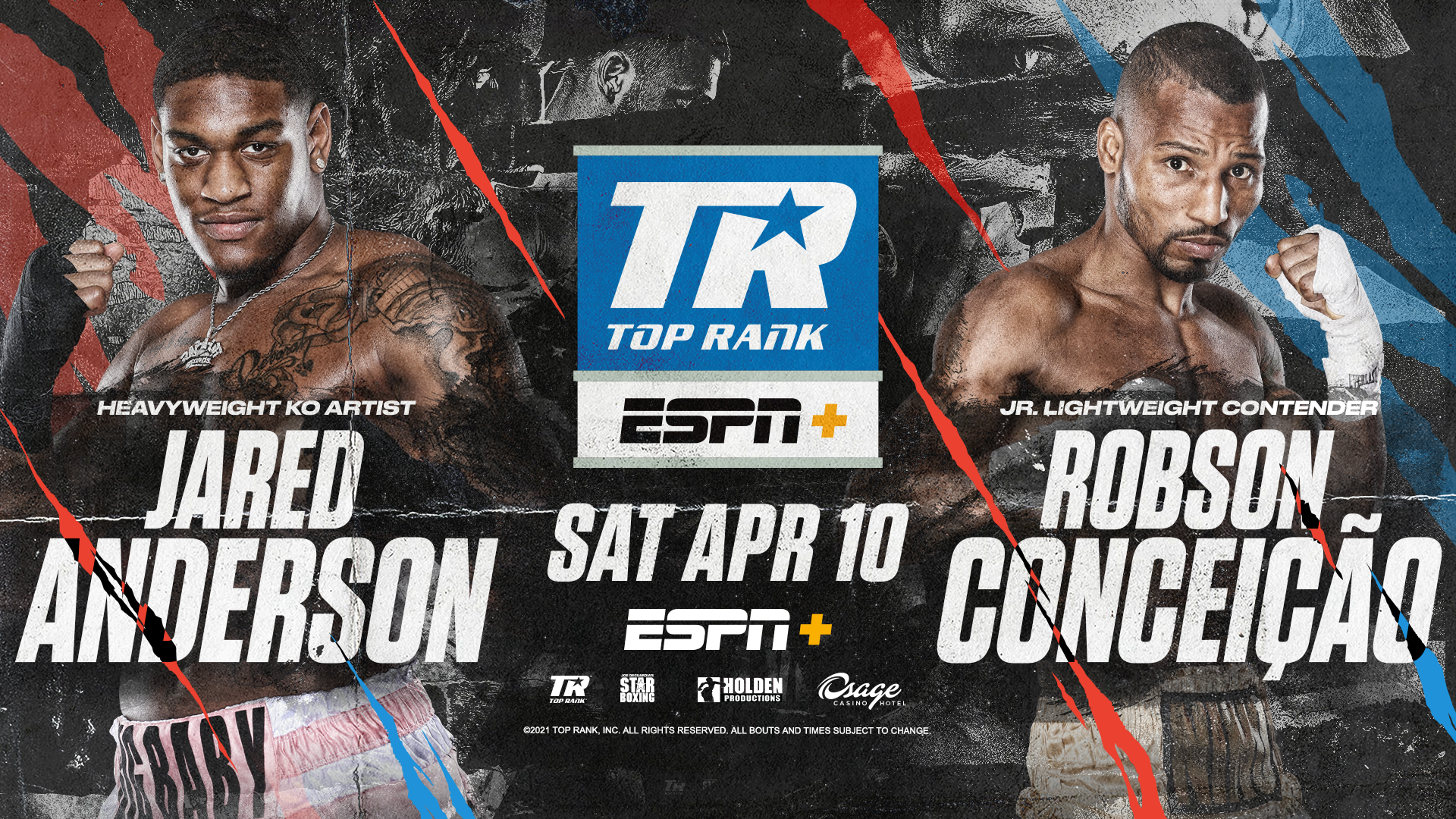 TULSA, OK (March 26, 2021) — The heavyweight division’s next king is taking his show on the road. Jared “The Real Big Baby” Anderson, who knocked out five opponents inside the MGM Grand Las Vegas Bubble, returns to action Saturday, April 10 against Jeremiah “The Bullfrog” Karpency in a bout scheduled for 8/6 rounds from Osage Casino in Tulsa, Oklahoma.

Promoted by Top Rank, in association with Joe DeGuardia’s Star Boxing and Tony Holden Productions, limited tickets are available and can be purchased by visiting StubWire.com.

“Jared Anderson is a superstar in the making,” said Top Rank chairman Bob Arum. “He is the world’s most exciting young heavyweight, and I can’t wait to see what he shows next. When you watch Jared, you are watching a future world champion.”

Anderson (8-0, 8 KOs), from Toledo, Ohio, turned pro with Top Rank following a stellar amateur career that included U.S. National Championship victories in 2017 and 2018. He has been spotless as a professional, notching five first-round knockouts and serving as Tyson Fury’s primary sparring partner before the Deontay Wilder rematch. He last fought Feb. 13 and created a viral moment with a left hook that knocked out Kingsley Ibeh in the sixth round. Karpency (16-2-1, 6 KOs), from Adah, Pennsylvania, is an 11-year pro whose only defeats have come against previously undefeated foes: Oscar Rivas (third-round TKO) and Sergey Kuzmin (sixth-round KO).

Anderson said, “I began 2021 on a high note against Ibeh, and I’m looking forward to carrying over my momentum against Karpency. The fans love big knockouts, and my goal is to deliver that every time I fight.”

2016 Olympic gold medalist Conceição, from Bahia, Brazil, cemented his status as a contender with last October’s gut check against Louie Coria. Conceição recovered from a knockdown and a pair of point deductions to squeak out a unanimous decision victory and preserve his unbeaten record. Ahumada, from Hermosillo, Mexico, is 3-1 since a 2018 TKO loss to Stephen Fulton, who went on to win a junior featherweight world title.

The six-foot Bell, from Toledo, Ohio, makes his 2021 debut following last July’s 10-round shutout over Filipino veteran Mark Bernaldez. Bell, who is ranked in the top 15 by the WBO, holds a 2019 victory over longtime contender Andy Vences and is closing in on a potential world title opportunity. Rojas, from Dallas, Texas, is 8-1 in his last nine bouts, with his only defeat coming by 10-round decision in January 2020 to Puerto Rican star Felix Verdejo. He fought last September in Mexico and scored a second-round stoppage.

Conto returns for his first fight in 15 months against the man he was supposed to fight Feb. 20 inside the MGM Grand Las Vegas Bubble. A medical issue forced Cortes out of the fight, but he is now recovered and ready to face the South Philadelphia native who has two consecutive first-round stoppages.

Ragan, from Cincinnati, Ohio, signed a professional contract with Top Rank last year following an amateur run that included a silver medal at the 2017 World Championships. As a professional, he’s been perfect, following up a first-round knockout in his professional debut with a pair of shutout four-round decisions. He steps up to six rounds against Clark, who bested the 4-1 Malik Loften in his last fight.

Tulsa’s Morrison, son of the late heavyweight star Tommy Morrison, returns from a nearly two-year layoff intent on extending his knockout streak. A proven ticket-seller in Oklahoma, this will be Morrison’s 14th professional fight in the Sooner State.

Tulsa native Milton returns home after a pair of stoppage wins to begin his career late last year. Dafney is coming off a first-round knockout Feb. 27 in Georgia.