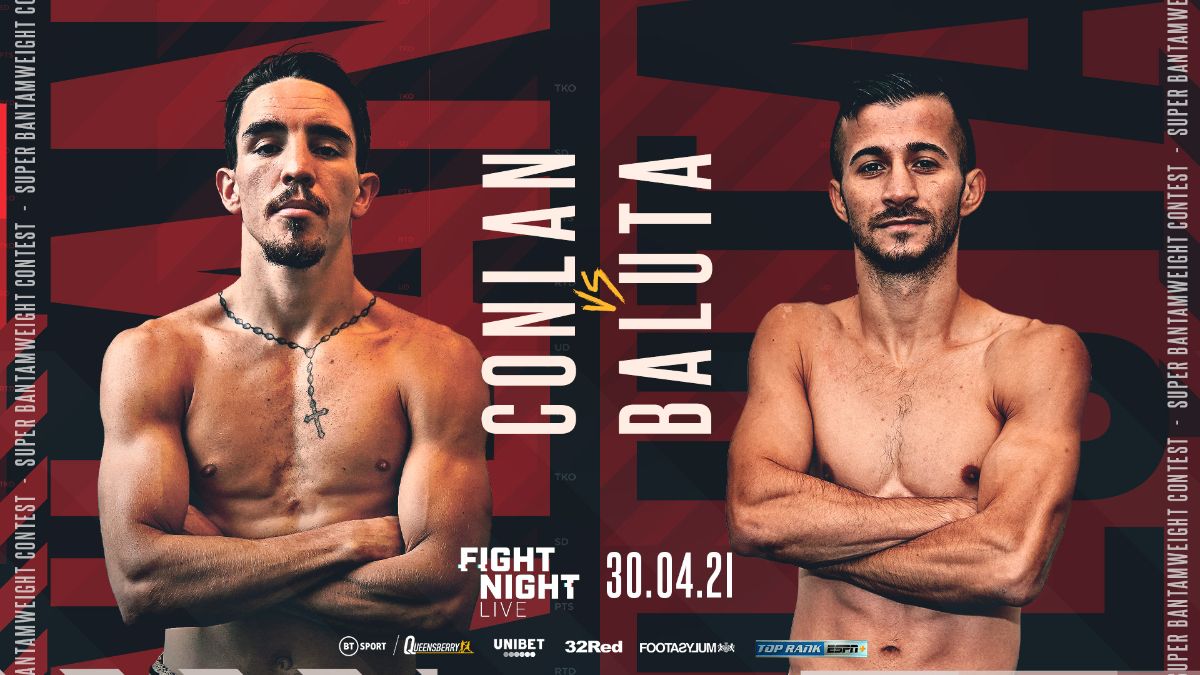 Mthalane, who is undefeated since 2008, will defend his IBF flyweight world title in the main event against London native Sunny Edwards. In the co-feature, longtime featherweight contender Conlan will make his junior featherweight debut in a 12-rounder against noted spoiler Ionut Baluta.

Promoted by Frank Warren’s Queensberry Promotions, Mthalane-Edwards and Conlan-Baluta will stream live and exclusively in the United States on ESPN+ at 4 p.m. ET/1 p.m. PT. Undercard bouts are scheduled to begin live on ESPN+ starting at 2 p.m. ET/11 a.m. PT.

“This is a big step up for Mick, as Baluta has pulled off quite a few upsets and is motivated to do so once again,” said Top Rank chairman Bob Arum. “Mick is close to a world title shot, and I expect him to be at his very best April 30. I am also pleased that American fight fans will have an opportunity to watch the sensational Mthalane, who is in tough against the young Edwards.”

Conlan (14-0, 8 KOs) is back after a disappointing 2020 that started with the COVID-related cancellation of his annual St. Patrick’s Day bout in New York and ended with an ankle injury suffered while training in November. He knocked out former world title challenger Sofiane Takoucht last August and now sets his focus on the junior featherweight division. He is ranked No. 1 by the WBO and No. 8 by the WBA, and he could be in line for a world title shot with a victory over Baluta (14-2, 3 KOs), a Romanian who is used to overcoming long odds. Last March, Baluta stunned former junior featherweight world champion TJ Doheny via eight-round unanimous decision, and six months later, he knocked out Conlan’s 2016 Irish Olympic teammate Davey Oliver Joyce in the third round.

Conlan said, “I’m very excited to get back in the ring against Ionut Baluta on April 30. I know how tough of a fighter Baluta is, but I’ve been training hard since shortly after my last win in August and will be well prepared for victory. I’m looking forward to putting on a great show and can’t wait to get back in the ring.”

Mthalane, 38, won his first world title in November 2009 with a unanimous decision over Julio Cesar Miranda for the vacant IBF crown. He cemented his world-class status with successful defenses over countryman Zolani Tete (TKO 5) and current WBO bantamweight world champion John Riel Casimero (TKO 5). He reclaimed the IBF world title in July 2017 with a narrow decision win over Muhammad Waseem and has since defeated a trio of Japanese challengers: Masahiro Sakamoto (TKO 10), Masayuki Kuroda (UD) and Akira Yaegashi (TKO 9).

Edwards (15-0, 4 KOs) has fought his last two bouts at junior bantamweight, but he returns to flyweight for a crack at one of boxing’s most celebrated champions. He last fought at flyweight in September 2019, dominating Rosendo Hugo Guarneros to win the vacant IBF International and WBO Intercontinental straps.

“Moruti is the most criminally underrated fighter, having not lost in 13 years, and he is a proper, proper threat,” Edwards said. “This is no gimme or easy world title fight — it is very, very far from that. I asked for this fight and, if you look back at press conferences or interviews, you can see that I have wanted it for some time. In my head, this is what was coming to me and it is finally here, and I have got what I wanted.”