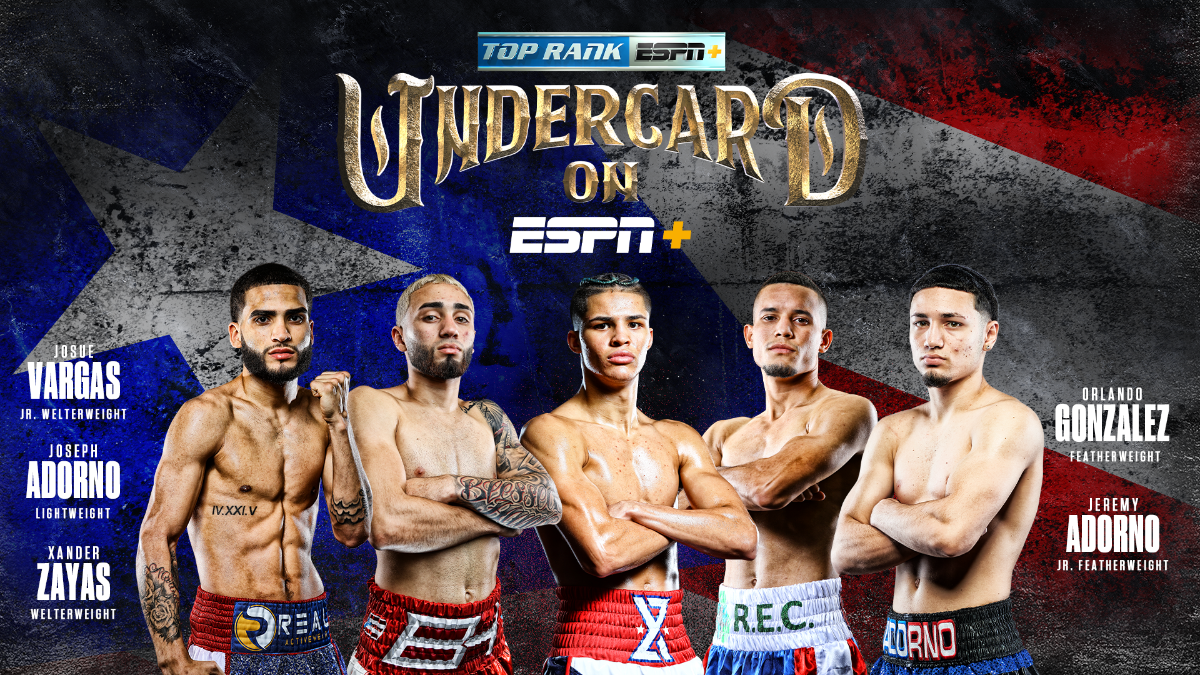 KISSIMMEE, Fla. (April 15, 2021) — Josue “The Prodigy” Vargas was born in Isabel, Puerto Rico, and idolized the great Felix “Tito” Trinidad. For the first time in his professional career, he’ll have a building full of Puerto Rican fans cheering him on. Vargas will fight Willie Shaw in a 10-round junior welterweight bout Saturday, April 24 at a sold-out Silver Spurs Arena in the Puerto Rican enclave of Kissimmee, Florida.

“It is time to show the world who ‘The Prodigy’ is,” Vargas said. “Fighting in Kissimmee is like fighting in Puerto Rico. After this fight, the Puerto Rican fans will talk about me. I am going to put on a show. I’ve seen some videos of Shaw on YouTube. I’m not going to take anything away from him, but he doesn’t have skills like I do. I have more experience than him. It’s time for me to break him down and show the world I’m a contender.”

Vargas (18-1, 9 KOs) had a breakthrough performance last October on the Vasiliy Lomachenko-Teofimo Lopez undercard, dominating contender Kendo Castaneda via unanimous decision. He made headlines last June when he conducted his post-fight interview on ESPN after Salvador Briceno knocked out a pair of his upper front teeth. Despite the dental mishap, Vargas nearly shut out Briceno. Vargas has won 12 consecutive fights since a controversial disqualification loss.

“I’ve shown my intelligence in the ring. I barely got touched against Castaneda,” Vargas said. “I threw more than 800 punches in 10 rounds. It showed me that I belonged with higher-level fighters. I was letting him survive. That was me being nice. This time, I’ll apply more pressure and get the stoppage.”

Shaw (13-2, 9 KOs), from Oakland, California, enters the lion’s den as an experienced road warrior, having fought six times in Mexico since turning pro in 2017. Last August, Shaw pushed top prospect Omar Juarez before losing a six-round decision. He rebounded in January with a second-round stoppage in Tijuana.

Adorno returns from a nearly 16-month layoff hoping to return to the win column following his January 2020 draw against Hector Garcia. He has a chance to advance from prospect to contender against the unbeaten Ortiz, who is coming off last November’s seventh-round knockout over Ugandan veteran Sulaiman Segawa on the Mike Tyson-Roy Jones Jr. undercard.

Puerto Rican southpaw stylist Gonzalez makes his 2021 debut against Lopez, a Texas resident who has upset a few undefeated prospects during his nearly nine-year pro career. Gonzalez went 162-16 as an amateur and inked a promotional deal with Top Rank in 2019.

Puerto Rican prodigy Zayas, an 18-year-old who signed with Top Rank at 16, makes his third pro appearance in Kissimmee. He last fought Feb. 20 in Las Vegas and was pushed the six-round distance by James Martin. Zayas, who won 11 national titles as an amateur, recently spent time in his Florida training camp sparring Gervonta Davis and former world champions Adrien Broner and Robert Easter Jr. Layton is unbeaten in three bouts since a 2019 TKO loss.

Adorno, a 2017 U.S. Youth National Championship gold medalist, turned pro under the Top Rank banner in March 2019. The younger brother of Joseph Adorno, he’ll fight for the first time since a January 2020 decision win on the Joe Smith Jr.-Jesse Hart undercard in Atlantic City. Martinez, who fights out of Hurst, Texas, fought last November and won a one-sided decision over the 1-0 Tevin Moore.

Gómez is a 19-year-old upstart from Caguas, Puerto Rico, the same city that produced Miguel Cotto. He turned pro last October and scored a sensational first-round knockout. Villegas has never stopped as a professional.

Use the hashtags #NavarreteDiaz and #BerlangaNicholson to join the conversation on social media. For more information, visit