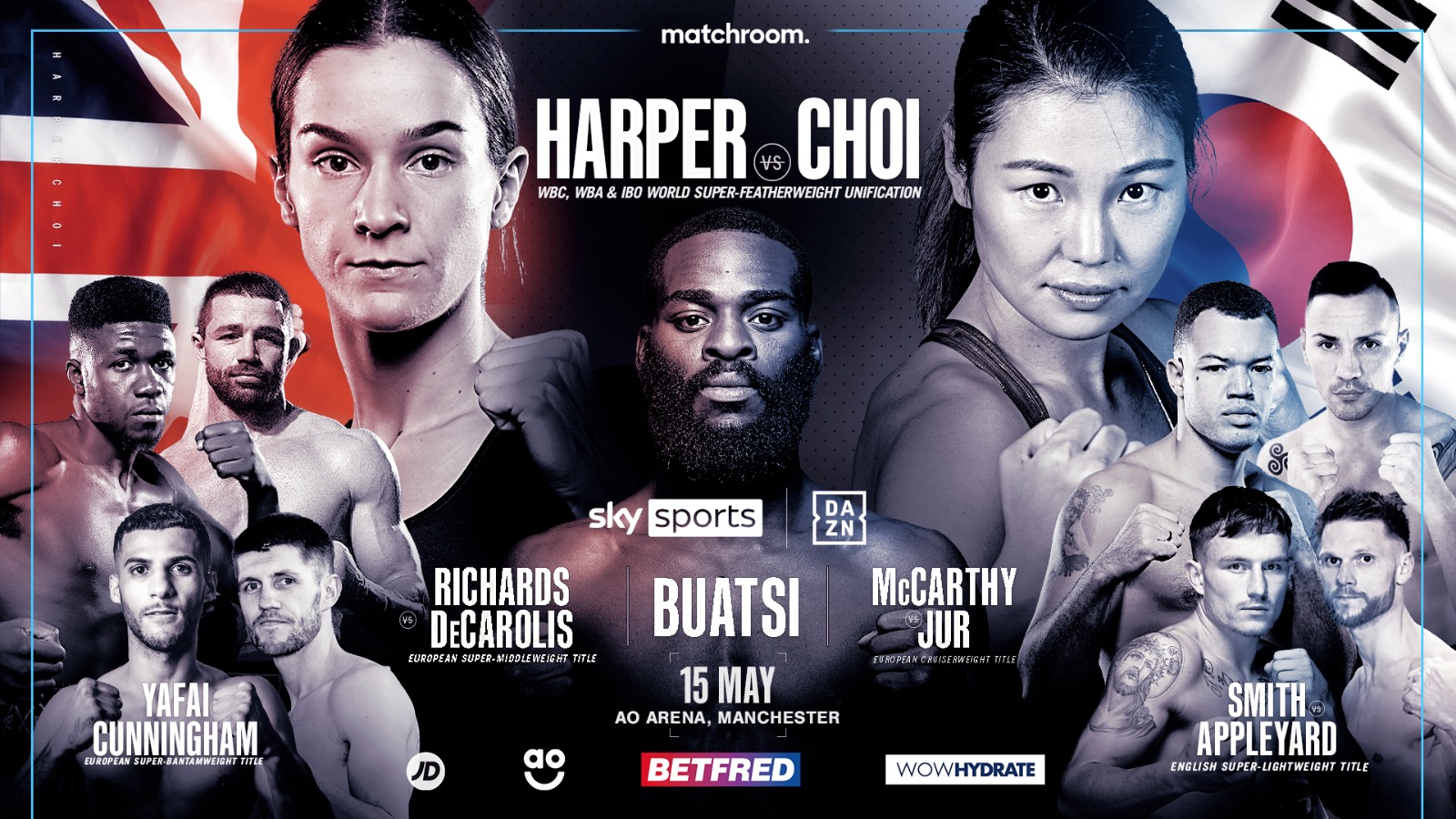 Terri Harper will put her WBC and IBO Super-Featherweight World Titles on the line against undefeated WBA World Champion Hyun-Mi Choi on a huge night of action at the AO Arena, Manchester on Saturday May 15 that also sees the return of rising Light-Heavyweight star Joshua Buatsi plus three European Title fights, live on Sky Sports in the UK and DAZN in the US and more than 200 countries and territories.

Harper (11-0-1, 6 KOs) looked sensational as she stopped Norway’s Katharina Thanderz in nine rounds to retain her WBC and IBO 130lbs crowns last time out in November at The SSE Arena, Wembley on the undercard of Katie Taylor’s win over Miriam Gutierrez.

‘Belter’ clung onto her belts after a thrilling draw with Natasha Jonas at Matchroom Fight Camp back in August, but the 24-year-old produced a far more composed performance to ruthlessly halt her mandatory challenger Thanderz in just her 12th fight.

Choi (18-0-1, 4 KOs), the longest-reigning world ruler in women’s boxing, beat China’s Chunyan Xu on her professional debut in October 2008 to claim the vacant WBA Featherweight crown before making seven defences of her World Title in the following five years.

The South Korean became a two-weight World Champion when she landed the WBA Super-Featherweight Title against Thailand’s Siriwan Thongmanit in May 2014, and most recently defended it against Calista Silgado on her Matchroom debut at the Seminole Hard Rock Hotel and Casino.

“It’s exciting that our dream of becoming Undisputed Super-Featherweight World Champion is taking a step closer to reality with my first unification fight,” said Harper. “I’m looking forward to the step-up and fighting an undefeated champion.

“Choi is the longest-reigning female World Champion and it will be an honour to share the ring with her. I’m more than ready. I’ve been training for this fight since the new year, even with my broken hand. I don’t just want to win; I want to win in style and make a statement.”

“I have waited a very long time for the opportunity to fight for the WBC belt,” said Choi. “I am so excited and looking forward to it. My goal has been to unify my weight division for many years and now the time has finally come.

“I know this fight in England will not be easy. Fighting in another country is extremely difficult but I am prepared for this adventure and challenge. I truly hope the best fighter will win. I have prepared for this opportunity my whole boxing career.”

Croydon’s Buatsi (13-0, 11 KOs) came through the toughest test of his career as he stopped brave Croatian Marko Calic in seven brutal rounds to retain his WBA International Light-Heavyweight Title in the main event at the Marshall Arena in Milton Keynes last October.

The 28-year-old has since switched trainers and will now be guided by Virgil Hunter in San Francisco, the renowned coach who oversaw Andre Ward’s legendary career that ended with a perfect 32-0 record and World Titles in two divisions.

Birmingham’s Gamal Yafai (18-1, 10 KOs) puts his EBU European Super-Bantamweight Title on the line for the first time against Jason Cunningham (28-6, 6 KOs) after claiming it with an impressive unanimous decision victory over Italy’s Luca Rigoldi at the Allianz Cloud in Milan.

“This is a cracking card and most likely our last in the U.K. behind closed doors,” said Eddie Hearn. “As Terri Harper continues her quest for Undisputed, she takes on the unbeaten champ Hyun-Mi Choi in a brilliant unification match-up. Joshua Buatsi returns to action under new trainer Virgil Hunter and we have three European Title match ups with champions Tommy MCarthy and Gamal Yafai defending and Leronne Richards going for the Super-Middleweight Title. Electric prospect Dalton Smith also steps-up in a great fight vs. Lee Appleyard for the vacant English Title as he continues his charge.”

“Terri is one of our leading women’s fighters – we’ve followed her journey closely – and now she aims to propel herself into elite company as a unified champion.

“Joshua Buatsi continues his explosive pursuit of a World Title fight and it will be fascinating to see the influence of America’s highly-regarded trainer, Virgil Hunter.

“Lerrone Richards, Tommy McCarthy and Gamal Yafai also return in a triple-header of European Title action, while Dalton Smith against Lee Appleyard should be an enthralling domestic clash.”