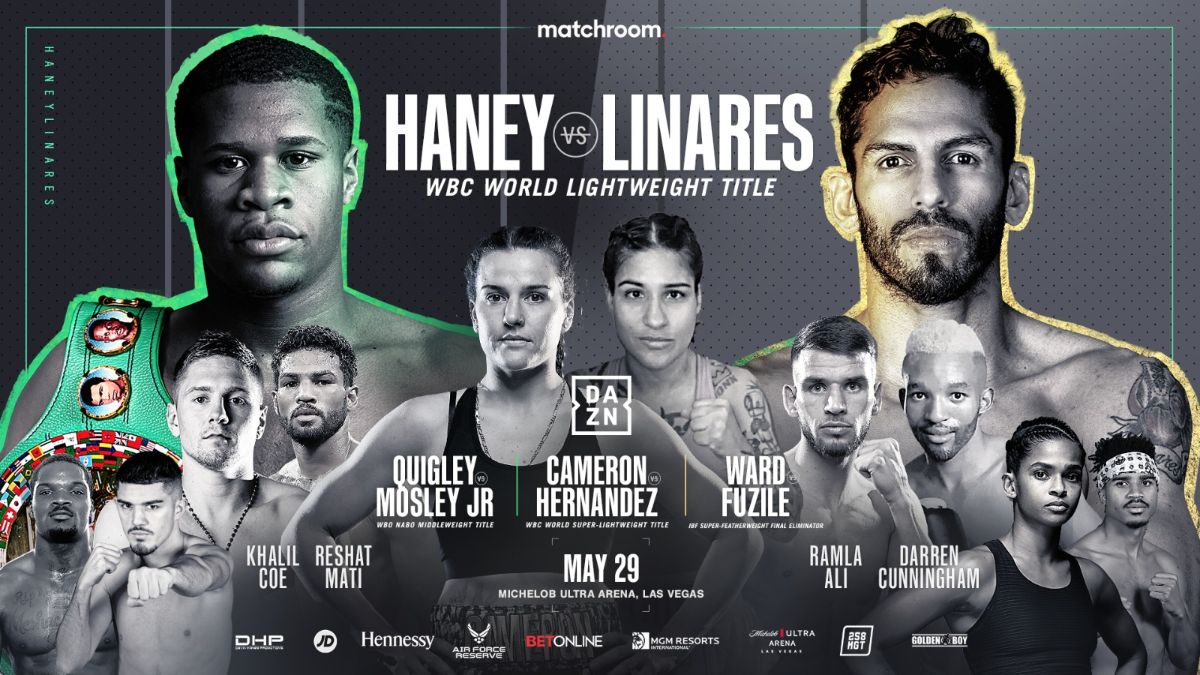 Chantelle Cameron will defend her WBC World Super-Lightweight title against Melissa Hernandez on the undercard of Devin Haney’s WBC World Lightweight title defense against Jorge Linares on Saturday May 29 at the Michelob ULTRA Arena at Mandalay Bay in Las Vegas, live worldwide on DAZN – with more tickets to go on sale at 10am PT tomorrow (April 25).

TICKETS WILL GO ON SALE AT 10AM PT ON SUNDAY VIA AXS.COM

Cameron (13-0 7 KOs) makes the first defense of the title she won with a shut-out points win over Adriana dos Santos Araujo in Milton Keynes, UK in October, and the talented 29 year old fights in the States for the first time in the paid ranks against Hernandez (23-7-3 7 KOs).

The Puerto Rican veteran is fighting for a World title at a third weight class after been the WBC Featherweight ruler and having also challenged for the WBC Lightweight strap.

There’s a fascinating battle between two Golden Boy Promotions stablemates as Jason Quigley and Shane Mosley Jr go toe-to-toe for the WBO NABO Middleweight title. Quigley (18-1 14 KOs) is back on the winning path with back-to-back wins after his setback against Tureano Johnson in July 2019, and a third win on the spin for the decorated Irish amateur would catapult him into the mix for more big fights and titles at 160lbs.

That’s exactly what Mosley Jr (17-3 10 KOs) is hunting too, and the son of the former three-weight king Shane Mosley is in fine form himself and has boxed more recently than Quigley, forcing the retirement of Cristian Olivas after five rounds in Indio, California in February. That was a fourth win on the bounce for the 30 year old, and he’ll be out for a statement win over Quigley to emerge into the mix at Middleweight.

It’s a huge night for Martin J. Ward as he faces Azinga Fuzile in a final eliminator for the IBF World Super-Featherweight title. Ward (24-1-2 11 KOs) is edging closer to his World title dreams and the #4 ranked Briton enters the biggest fight of his career to date on his American debut and a welcome return to action for the 29 year old whose last fight was a shutout win over Jesus Amparan in Sheffield, UK in February 2020.

Fuzile (14-1 8 KOs) also fights in America for the first time in his career, and the South African ranked one spot lower than Ward at #5 is taking a second bite at the cherry having faced Shavkatdzhon Rakhimov in an eliminator in September 2019 in East London, South Africa, with Fuzile ahead on the cards before the Russian recorded an eight round stoppage. ‘Golden Boy’ has not boxed since that night but can get back on course for a world title shot in what promises to be an exciting clash.

At the other end of the spectrum, there’s a professional debut on the card for Eddie Hearn’s latest American signing, Khalil Coe. The 24 year old Jersey talent will kick life off in the paid ranks at Light-Heavyweight before eyeing a move down to 168lbs, and his journey will begin in Las Vegas.

Reshat Mati (9-0 7 KOs) enters double figures in the pro game on the card, with the New Yorker looking to extend his KO run to six fights, having added two KOs in quick succession in November and December, both in Hollywood, Fl.

Ramla Ali (2-0) has been impressive in her two fights since turning pro in October and the first pro female fighter from Somalia gets an introduction to American fight fans on the bill, a card that is rounded off by Devin Haney Promotions’ Darren Cunningham (13-0 7 KOs) continuing his pro rise.

“This is a stacked card in support of a brilliant main event – and our first promotion in Las Vegas,” said promoter Eddie Hearn. “It’s a brilliant opportunity for Chantelle Cameron to showcase her skills in the States and stake her claim for the unification fights she craves, against a tough competitor in Melissa Hernandez.

“Quigley vs. Mosley Jr has the feel of a must-win crossroads fight for the pair, while Ward vs. Fuzile has plenty at stake and is sure to catch fire.

“What a night for Khalil Coe to make his debut, this young man can become a star, and the pro journeys of Reshat Mati, Ramla Ali and Darren Cunningham continue on the bill. This is an unmissable night of boxing in Las Vegas.”