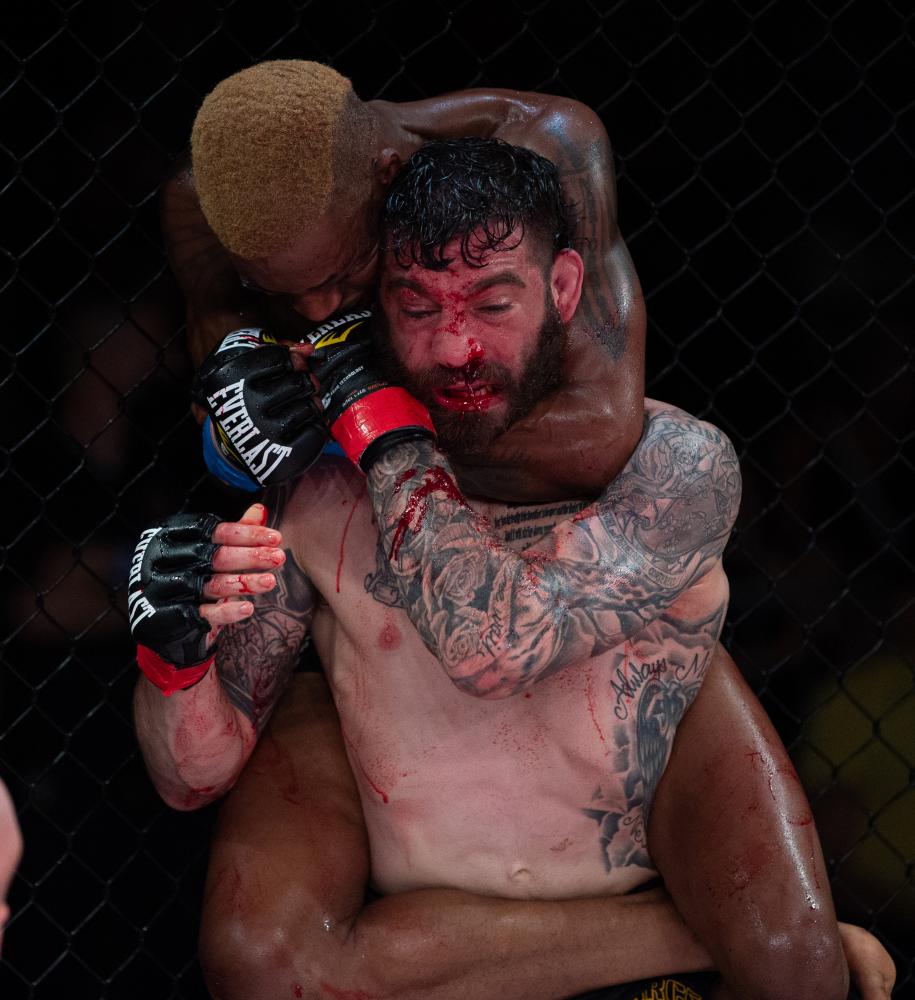 CES MMA photo by Will Paul
BANTAMWEIGHT JOSHUA SMITH, above, locks in the rear-naked choke against CES MMA veteran Dinis Paiva on Friday in the second round of their scheduled five-round bantamweight world championship main event at CES MMA 62 in Orlando. Paiva tapped, ending both the bout and his decade-long career. Smith is now the fourth CES MMA bantamweight champion in the promotion’s history.
FOR IMMEDIATE RELEASE
Friday, April 30, 2021

Smith submits Paiva to capture vacant bantamweight title at CES 62
Orlando, FL (Friday, April 30, 2021) – Joshua Smith predicted it earlier in the week, spoke it into existence, and then went out and delivered the biggest win of his career Friday night on UFC FIGHT PASS®.

The Coconut Creek, FL, resident – a former collegiate wrestler and soon-to-be first-time father – submitted longtime CES MMA veteran Dinis Paiva (13-9) via rear-naked choke in the second round of their scheduled five-round World Bantamweight Championship bout in the main event of CES 62 at the Caribe Royale Orlando.

In a bittersweet ending to a brilliant career, Paiva succumbed at the 4:01 mark after eating a stiff, 1-2 combination that left his nose bloodied and broken, and announced his retirement shortly after the bout. Conversely, it’s just the beginning for the 33-year-old Smith (10-6), who hopes to follow in the footsteps of former CES MMA bantamweight title-holders Andre Soukhamthath, Andre Ewell, and Tony Gravely, all of whom earned a trip to the UFC shortly after capturing the belt.

“I’ve been calling it all week,” said Smith, before putting the entire bantamweight division on notice. “I said I was going to finish him in the second round.

Friday’s headliner was originally supposed to be part of a double main event featuring two three-round bantamweight title eliminators, but the scheduled eliminator between Andrew Whitney and Diego Silva was scratched Thursday due to weight issues. The promotion decided to bump Paiva and Smith to five rounds and put the belt on the line, a major turn of events that left both fighters antsy for the opening bell.

Paiva got off to a strong start, controlling the fight from the center of the cage, but a hard combo by Smith in the second round changed the complexion of the fight. With his nose bloodied and legs wobbly, Paiva had trouble regaining his footing. Breathing soon became an issue. Knowing his opponent was hurt, Smith took his time, scored a takedown, then softened Paiva with quick strikes before locking his left forearm under Paiva’s exposed neck. Paiva quickly tapped, ending a storied career in which he fought a record 21 times for CES MMA as the promotion’s elder statesman, and, for many years, the face of the franchise.

“It’s been a long road – 10 years,” a tearful Paiva announced after the bout. “It’s been a blessing, but this is it. It’s time for me to hang it up. The fight game has been good to me. It takes more than it gives, but I’m so thankful and blessed to have been a part of this organization.”

Fighting in the cage for the first time since 2018, light heavyweight Gary Balletto III (6-2) of Cranston, RI, defeated Pensacola’s Dahlen Wilson (4-4) via rear-naked choke at 2:26 of the second round of the co-main event. The son of boxing legend Gary “Tiger” Balletto, the younger Balletto had not fought professionally in mixed martial arts since breaking his jaw in a 2018 loss to Jeremiah Wells, however, he shook off some rust by making his pro boxing debut in 2019, scoring a fourth-round knockout win.

Returning to the cage Friday, Balletto looked sharp as ever, driving two vicious knees to Wilson’s midsection early in the second round, which helped set up the finisher. Once Balletto got Wilson to the canvas, he used his superior wrestling ability to take Wilson’s back and eventually lock in the choke to end the bout. Balletto has now won four pro bouts by submission.

In a highly-entertaining light heavyweight bout, submission specialist Adriano Capitulino (8-4) earned his sixth such victory, forcing the game Hugh McKenna (3-5) of Long Island to tap via triangle choke at the 2:56 of the third round. Capitulino’s height advantage was a problem early for McKenna, who struggled with his footing and couldn’t close the distance with strikes in the opening round. McKenna finally found his rhythm over the final two minutes of the second round, but, by then, had nearly run out of gas. Capitulino picked up the pace in the third and coaxed McKenna into the triangle to earn the submission.  The loss snapped McKenna’s two-fight win streak; he earned his most recent victories at CES 56 and CES 59 in 2019.

North Carolina bantamweight Da’mon Blackshear (9-4) pieced together one of his most complete performances in a dominant win over Orlando’s Joe Penafil (5-3), dominating nearly every second of the fight before finishing Penafil via guillotine at 3:27 of the third round. Blackshear’s striking broke Penafil early, and it appeared the Orlando native might not make it out of the second round. Penafil valiantly withstood everything Blackshear threw at him – an all-around versatile attack for the three-time CES MMA vet that includes, kicks, elbows, and flying knees – until Blackshear caught him with a modified version of the 10-finger choke to earn the submission win.

Rebounding from a near disastrous opening round, Tampa’s Carlos Espinosa (6-4) fought back to earn a 29-28 unanimous decision across the board on all three scorecards against Coconut Creek bantamweight Leo Carvalho (3-5). Carvalho’s striking set the tone early, and he appeared to weaken Espinosa’s defense with effective leg kicks in the opening round, but Espinosa gathered himself in the second and began to take over with his superior ground game. Espinosa easily won the second and dominated round three for the tiebreaker. Espinosa has now won three of his last four dating back to January of 2020.

In the main card opener, light heavyweight Yuri Panferov (1-0) of New Haven, CT, earned the win in his professional debut, submitting North Carolina’s Gregory Smith (0-2) at 4:24 of the opening round via rear naked choke. Smith mounted an early attack and the fight was back and forth for a bit until Panferov scored a takedown and put his ground game to use. The 24-year-old Russian is now 6-0 in his fighting career, including five amateur victories.