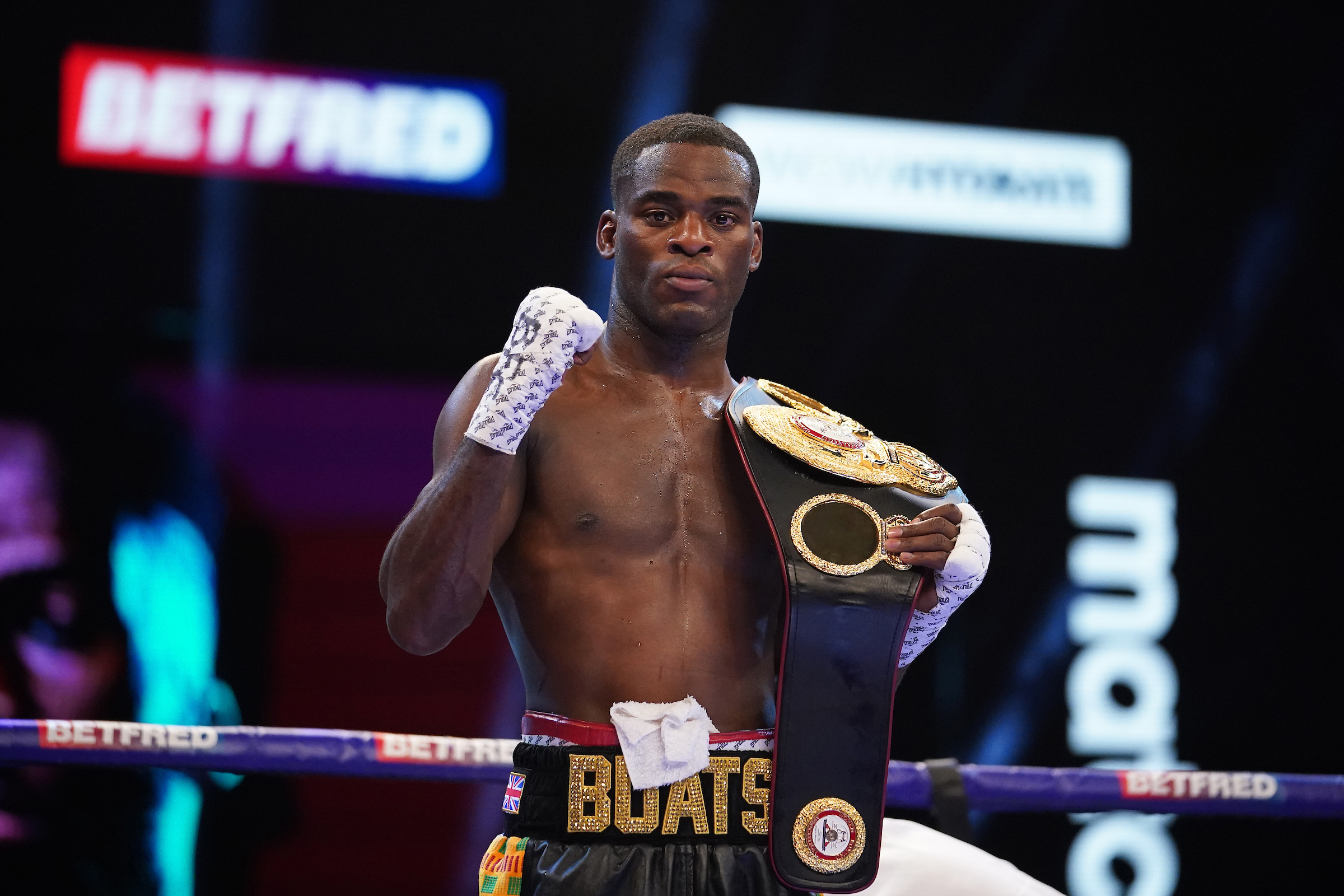 Joshua Buatsi viciously knocked out Daniel Blenda Dos Santos in four rounds to retain his WBA International Light-Heavyweight Title at the AO Arena, Manchester, live on Sky Sports in the UK and on DAZN in the US and more than 200 countries and territories. The former Olympian won the battle of undefeated 175lbs contenders with a brutal overhand right which slumped his rival to the canvas two minutes and 44 seconds into the fourth session.

Buatsi had veteran trainer Virgil Hunter in his corner for the first time and the resounding result puts him on a collision course with the division’s best.

“I hope he’s okay,” Buatsi told Matchroom. “We’ve seen this happen to many fighters. You box someone they say you’re levels above and it’s a banana skin situation. I’m glad I handled it. The most important thing is I hope he’s okay. We’ve seen these type of fighters come and cause upsets recently and I was adamant it wasn’t going to happen to me. I’m glad it went well.

“I remain optimistic all of the time in the moves that I make and this is one of them. We will have a week or so off and then we’re back in the gym to keep building. Going in we had little footage of him. Usually you can watch who you’re going to fight to get a feel. He looked very good in the one bit of footage we had of him. I had to learn round by round what he was like.

“Virgil gave me the perfect instructions and I followed them. I haven’t got here by being given it. The little that I’ve earnt, I had to work hard for it. I thank god for everything that we’ve got but I work hard for it. When I step in that ring it’s a dog mentality. This is a fight. I’m here to take everything. We’re here to win but we’re not here to hurt anyone. The time that we’re in the ring, yes, we want to win, and we want to entertain. We’re not here to hurt anyone in the long-term.”

Richards, who had previously won British and Commonwealth honours, ran rings around De Carolis to secure a unanimous decision.

De Carolis, a former WBA World Champion, could not lay a glove on Richards who is now unbeaten in 15.

“I said I was going to conquer Europe, and I’ve done it,” Richards told Matchroom. “I’m very pleased and I’m very happy. I wanted this so bad to complete the collection. British, Commonwealth and now the European Super-Middleweight Champion. I’m very happy.

“It’s all of the drilling and all of the work in the gym. I’d like to thank my team – Dave Coldwell, Danny Wilson and my nutritionist Lee for getting me in the best shape possible for this fight. I’m going to be very difficult to beat. I said this from the start. It’s all about the skills, and I have them in abundance. I showcased a little bit of that tonight.

“There were points in the fight where I decided to sit in the pocket and work with him. I could have gone up the gears a little bit more tonight. I felt like what I was doing was enough. My team are very happy with my performance.

“I started from the bottom and worked my way up – I backed myself. There’s something to learn at every level. We’ll see what the team says the best options are for me. The next step now is fringe world level.”

Yafai was down in the second, fourth and sixth rounds and spent the rest of the fight desperately trying to salvage his belt, but to no avail.

“We’re buzzing,” said Cunningham. “We’re from a little town called Doncaster. We’ve got a British, European and World Champion – that’s some doing that. In at three weeks’ notice – I won my second Commonwealth Title at three weeks’ notice. They tried catching me out tonight, I don’t care what anyone says – that’s what they’ve done.

“I’ve stayed prepared, stayed disciplined and dedicated. This is what happens when you stick to it. I was in this venue last time I had a big fight against Michael Conlan. I pushed Michael Conlan hard. I had to grit in late on tonight – he hurt me a few times to the body. I’ll never quit. It’s my boxing ability that sets me above the rest. I’m an awkward tall southpaw.

“I said I knew I had the tools to do it. I said I’d have done a better job if I had more notice but to be fair, I dropped him three times and it was quite comfortable really. I knew to keep calm and carry on what I was doing. I stuck to it and this is my reward. I made a lot of people in Doncaster a lot of money tonight.

“I showed my class, I was levels above him in terms of boxing ability. Usually you get a good ten weeks’ notice for a European Title fight – it was the biggest fight of my life. I’ve been out of the ring since February last year. Tonight was just my night, I knew I was all wrong for him.”

Tommy McCarthy successfully defended his European Cruiserweight Title for the first time by stopping Alexandru Jur in the sixth round, twice flooring him with body shots.

“I’m delighted,” McCarthy told Matchroom. “I got a few rounds in and a stoppage. I got everything that I wanted. We prepared for Jur to give me a good test. I don’t think he expected me to come out the way that I did. It threw him off a bit. I can’t complain.

“I thought it was all over after the first knockdown. Feinted to the head, left hook to the body and he went over. He went into survival mode after that. It was the same again with the next one. I’ve been working hard with my team all through camp. We’ve been doing all sorts of drills. We’ve been working on being explosive. The S and C training was all focused on me being explosive. I’m a hard puncher.

“Everything was perfect this camp – no injuries. I was driving them shots through him, it was great. The pandemic has been great for me, I’ve kept my head down, stayed in the gym and worked on my whole game. I hope everybody is buzzing back home in Belfast.

The referee stepped in with Appleyard still on his feet when Smith’s onslaught became too much, progressing the 24-year-old’s record to 8-0 (7 KO’s).

“I’ve got my first professional Title,” said Smith. “I’ve dreamt about this since I was a little boy. I’m English Champion! It’s the starting block for me. When the fight first got announced, I thought, ‘it’s just an English Title’, but now I’ve got it it’s like, ‘wow, I’m a professional Champion now’. It feels good.

“All credit to Lee – he’s one tough kid. I was prepared for a fast-paced ten rounds tonight, but he was just taking a few too many shots in there. I’m good friends with Lee out of the ring. When you go in there it’s just business. I could see his face was getting bust up pretty bad. I kind of felt sorry for him in a way. I’ve got respect for him. I knew eventually the shots would come and I knew he wasn’t going to last long.

“I’m happy with my performance. You want to win in style. The knockouts are good. We want to win but we don’t want anyone to come out of there hurt. People forget that was my eighth pro fight there. Lee is an experienced guy and he’s been in with some top kids. He’s been those championship rounds.

“I’m taking my time, I’m 24. I’ve got one shot at boxing; I want to make sure that I do it right. I’m not in there with no mugs – they’re real contenders. That was a good step up and I proved what I’m about. I’m not a championship round fighter yet. Kay Prosper just boxed for the European Title – they’re the type of fights that I want. I want to get those championship rounds in, I’m in a tough division. Maybe I’ll get over to the States in my next fight, get a bit of experience over there. I’d love to do that.”

The former Team GB standout, who has shared sparring with the likes of Unified Heavyweight World Champion Anthony Joshua and European Champion Joe Joyce, completely dominated Manev, earning a 60-54 decision from the referee.

“It was good to get six rounds under my belt,” Dacres told Matchroom. “I know a lot of people like to get the big Heavyweights that get them out of there in one round, but you don’t learn much from that. I got to show my skills. I didn’t just go for all power. I’ve got plenty more in the tank, so it was good to get the rounds in.

“I showed my hand speed at times. I showed I can box. I didn’t rush it. I’ve varied the power up. It’s all building up. We’re training to be a twelve-round fighter, not just a one or two round knockout artist. You don’t gain much from getting someone that is going to fall over after a round. Six tough rounds, I got to go through the gears, show a bit of what I’m about and learn a little bit as well.

“I was pretty relaxed to be honest. I’ve had plenty of amateur fights. I know that I prepared very hard. It felt good to get in there. Hard work is at the route of it all. If you put that hard work and dedication in, the sky is the limit. I’ll keep putting my head down in the gym and performing in the ring.”

Leicestershire’s Ellis Hopkins made a winning to start to life in the professional ranks, comfortably outpointing Bulgaria’s seasoned veteran Borislava 40-36 in the opening bout of the night.

Hopkins, 20, is the first female professional boxer from the traveller community and hopes to inspire a new generation of girls to follow in her footsteps.

“It was a good performance, I got going in the last two rounds,” Hopkins told Matchroom. “I’m just glad to get the first one out of the way, and on such a big platform. I couldn’t be more thankful to Matchroom and MTK for giving me the opportunity.

“She was tough, you can tell she’s experienced by the way she knew how to hold on every time I caught her. Becoming the first ever female from the travelling community to turn professional is a very big achievement and I hope I can inspire more young girls to do the same.

“It’s the perfect time to turn over, women’s boxing is going from strength to strength at the moment. I just want to get as many fights under my belt as I can this year and next year we’ll push for Titles.”