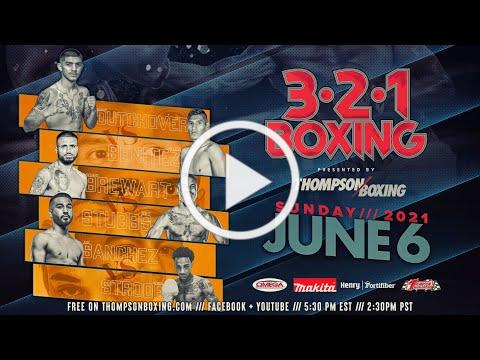 CORONA, CA (May 26, 2021) – Thompson Boxing Promotions 3.2.1. Boxing will return with another action-packed show on Sunday, June 6th, 2021, headlined by exciting and emerging contender, junior welterweight Michael Dutchover, who looks to be one step closer to a world title shot as he faces Ivan Leon Benitez in a 8-round main event bout.
The free stream will air live on the Thompson Boxing Promotions website (www.thompsonboxing.com), as well as their Facebook and YouTube pages. 3.2.1. Boxing will take place at the Omega Products International Event Center in Corona, CA, and will start at 2:30 p.m. PT / 5:30 p.m. ET.
Dutchover (14-1, 10 KOs), of Midland, Texas, is eager to return to the ring as the man known to fans as the “West Texas Warrior”, is one of Thompson Boxing’s most exciting young fighters.
“It has been a long time coming, but finally it is here,” said Dutchover, on making his 2021 debut. “I was supposed to return to action in December but an injury occurred. I know everything happens for a reason but now I am eager to show everyone why I am a future world champion in the making. I want to thank my coach and manager Danny Zamora, as well as Thompson Boxing for sticking by my side.”
Dutchover’s opponent, Benitez (14-4-1, 6 KOs), of Cancun, Mexico, is looking to spoil the show.
“People are largely discounting me in this fight,” said Benitez. “I have wins over two undefeated opponents and am coming off a draw against Francisco Corrales, in which I felt I won in December. I have never felt this good in my career and I am ready upset the house fighter.”
The 6-round co-main event will see junior middleweight Richard “Cool Breeze” Brewart Jr. (9-0, 4 KOs), of Rancho Cucamonga, coming off major wins over Louis Hernandez and Nate Weston, looking to become a full-on contender as he faces Donte Stubbs (6-1, 2 KOs), of Riverside, Ca, in a fight that will be a crosstown rivalry.
“My last two fights, I’ve had to show my heart, and that I can dig deep to win a fight,” said Brewart Jr. “In this fight, I am going to show the power I hold in my hands, and my ability to control the fight. I am taking tough fights because I believe in myself, and I am hoping that by the end of the year, I can fight for some form a title, and this is the type of opponent I need to beat to do that.”
His opponent, Stubbs is unimpressed with Brewart Jr., and believes he has all the ability to come out on top.
“I have faced better opponents than Brewart Jr. and he gets hit too much,” said Stubbs. “I have faced fighters like Fred Wilson Jr., and Isiah Jones, what Brewart Jr. brings to the table isn’t anything new. I’m going to show him that he made a big mistake by taking this fight.”
In the opening 6-round bout, Jose “Tito” Sanchez (6-0, 4 KOs,) will look to emerge onto the scene as faces fellow unbeaten fighter Andrew Strode (6-0, 1 KO) in a fight in which someone’s “0” must go.
“This is the second time I have faced an undefeated fighter in less than ten fights,” said the 21-year-old Sanchez. ” I am stepping up and taking tough fights to show everyone in the sport of boxing that I’m a great fighter. This is another fight where my talent will be on display.”
Strode though has other plans for Sanchez, as he himself is looking to stay unbeaten.
“I am going to win this fight and show why I am one of the best prospects in boxing,” said the undefeated Strode. “These are the type of fights fans want to see and get people excited, and I am happy to be in such a compelling match-up.”
“We’re glad to have Michael Dutchover back in the ring,” said promoter Ken Thompson. “All of these fights are close with both fighters having to answer questions in the ring about themselves, and we’re excited for the action they will bring on June 6th.”
“This is one of the better 3.2.1 Boxing cards we have put together,” said Alex Camponovo, Thompson Boxing’s general manager and creator of 3.2.1 Boxing. “Michael Dutchover is in a great fight, but the two undercard fights are extremely strong with two undefeated fighters facing each other in Sanchez vs Strode, and Richard Brewart Jr will look to have another impressive performance against Donte Stubbs, which is a great all-action fight! I am excited for this card and cannot wait for these fights to kick off.”
Beto Duran will operate as the blow-by-blow commentator with expert commentary by Doug Fischer and Steve Kim. Jessica Rosales will serve as the onsite ringside reporter.
3.2.1 Boxing is sponsored by Thompson Building Materials, transforming spaces in beautiful places; Omega Products International, the leading stucco manufacturer in the United States; Henry / Fortifiber, moisture system control as easy as 1,2,3, and Makita, rule the outdoors.
For more information, regular updates on our fighters, events, and promotions, please visit ThompsonBoxing.com. You can also follow the conversation on social media, please use #321Boxing and #ThompsonBoxing.
Please check our Facebook Page, watch our YouTube channel on Thompson Boxing TV and follow us on Instagram and Twitter @ThompsonBoxing.
Fight Hub TV is a proud Media Partner with Thompson Boxing’s 3.2.1. Boxing shows and a great resource for all things Boxing.
# # #