Two new partnerships will see Top Rank and BOXXER fights on Sky Sports until 2025, ensuring boxing fans will see the pick of the sport across the world

Full Sky Sports, Top Rank and BOXXER partnership launch in August – agreements will bring more boxing to Sky Sports than ever before 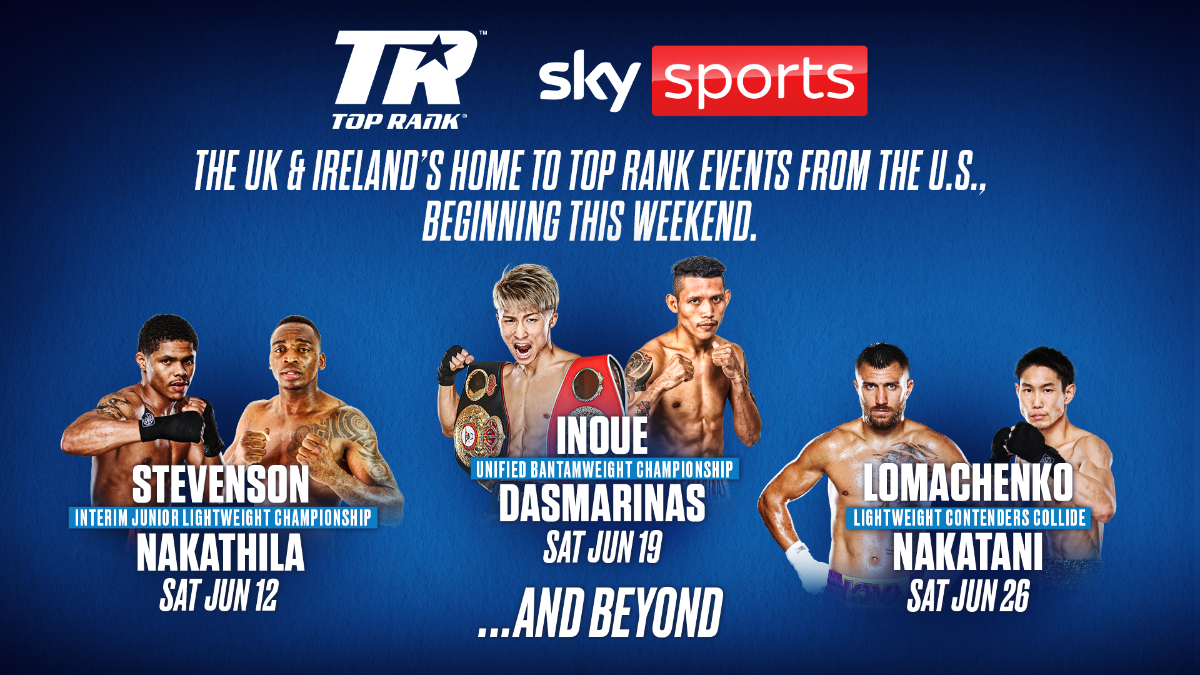 LONDON (June 11, 2021) —  Sky Sports has outlined the next phase in its long and proud 30-year association with the sport of boxing, bringing two new partnerships that will deliver a fresh and exciting lineup of fighters both in the UK and internationally and more boxing than before.

Beginning on Saturday [June 12], Sky Sports will be the UK & Ireland home to Top Rank events from the United States thanks to a brand-new licensing agreement with the prestigious boxing promotion company. Sky Sports will step up its commitment to the very best UK fighters in a partnership with  BOXXER, founded by the youngest licensed promoter, Ben Shalom. John Wischhusen, formerly Head of Boxing at Matchroom Sport, brings more than 20 years of boxing management experience to the BOXXER team. Full UK schedule and announcements will be made in August.

The agreement will mean Sky Sports will broadcast many of the sport’s elite pound-for-pound fighters and deliver the best of men’s and women’s international boxing to Sky Sports audiences. Customers can look forward at least 18 Fight Nights a year, approaching 100 hours of boxing on Sky Sports, as well as 50-plus years of archive content highlighting legends such as Ali, Foreman, Pacquiao, Robert Duran, Sugar Ray Leonard, and Floyd Mayweather Jr.

BOXXER aims to challenge traditions with a new approach to boxing promotion and Sky Sports and BOXXER will work collaboratively including with other promoters to bring elite fighters to Sky Sports Boxing with a modern approach to the sport.

Sky Sports, BOXXER and Top Rank will reveal a more detailed fight schedule for the remainder of 2021 as well as a refreshed editorial approach over the coming weeks. This wide-ranging partnership will benefit the very top of the sport as well as at grassroots levels, with a commitment to engage with the British Boxing Board of Control on how to ensure sustainable growth. Sky Sports and BOXXER are committed to developing initiatives to support grassroots boxing and the facilities to grow the sport and will outline further details in August. Sky Sports and BOXXER aim to introduce a new dynamic and diverse approach encompassing all platforms and engaging new audiences.

Sky Sports Managing Director Jonathan Licht said: “We’re very excited to partner with Top Rank and BOXXER to bring more world class boxing to Sky Sports.  Top Rank are one of the biggest boxing promoters in the world, and our customers will now be able to see more of the world’s best boxers on Sky.

“BOXXER have ambitious and exciting plans for the sport in the UK, and we share a long-term view for boxing.  Sky Sports has been a strong and close partner to boxing for more than 30 years and we look forward to continuing our partnership, giving a platform to the best fights at home and abroad and helping to grow the sport at elite and grassroots levels. We look forward to sharing more details with boxing fans in the next couple of months.”

Top Rank President Todd duBoef said: “For decades, Sky has been the leading sports brand in the UK. The world’s biggest sporting events and boxing matches have been cultivated under the Sky banner. Top Rank is honored to partner with Sky to continue to grow the sport both locally and globally for years to come.”

BOXXER founder Ben Shalom said: “Sky Sports has been the bedrock of British boxing for many years. We have been waiting for the opportunity to offer a transformative approach to the sport and we are delighted that Sky Sports have bought into this vision. We believe this will take the sport to new heights. Sky will show the best fights from around the world alongside a powerful UK schedule.”

“In John Wischhusen, Sky Sports retain a longstanding and respected relationship within the Sport, and Ben Shalom is one of the new generation of promoters at this transitional and exciting time for Boxing in the United Kingdom.

“Sky Sports’ next chapter in boxing represents a fantastic opportunity for many as they will continue to broadcast major events, in addition to supporting the boxing pyramid in this country.”

These new agreements will ensure Sky Sports remains the home of world class sport in the UK and Ireland, including Anthony Joshua’s next bout exclusively live on Sky Sports Box Office.

Sky Sports also broadcasts the best matches every weekend from the Premier League, EFL, Scottish Premiership and for the first time the Women’s Super League, every race from the Formula One, the best of cricket, golf and much, much more.