Ground-breaking series returns across July 31, August 7 and August 14 as Matchroom welcome fans to their Brentwood HQ in Essex

Fight Camp available exclusively on DAZN for the initial monthly price of just £1.99 in the UK and €1.99 in Ireland 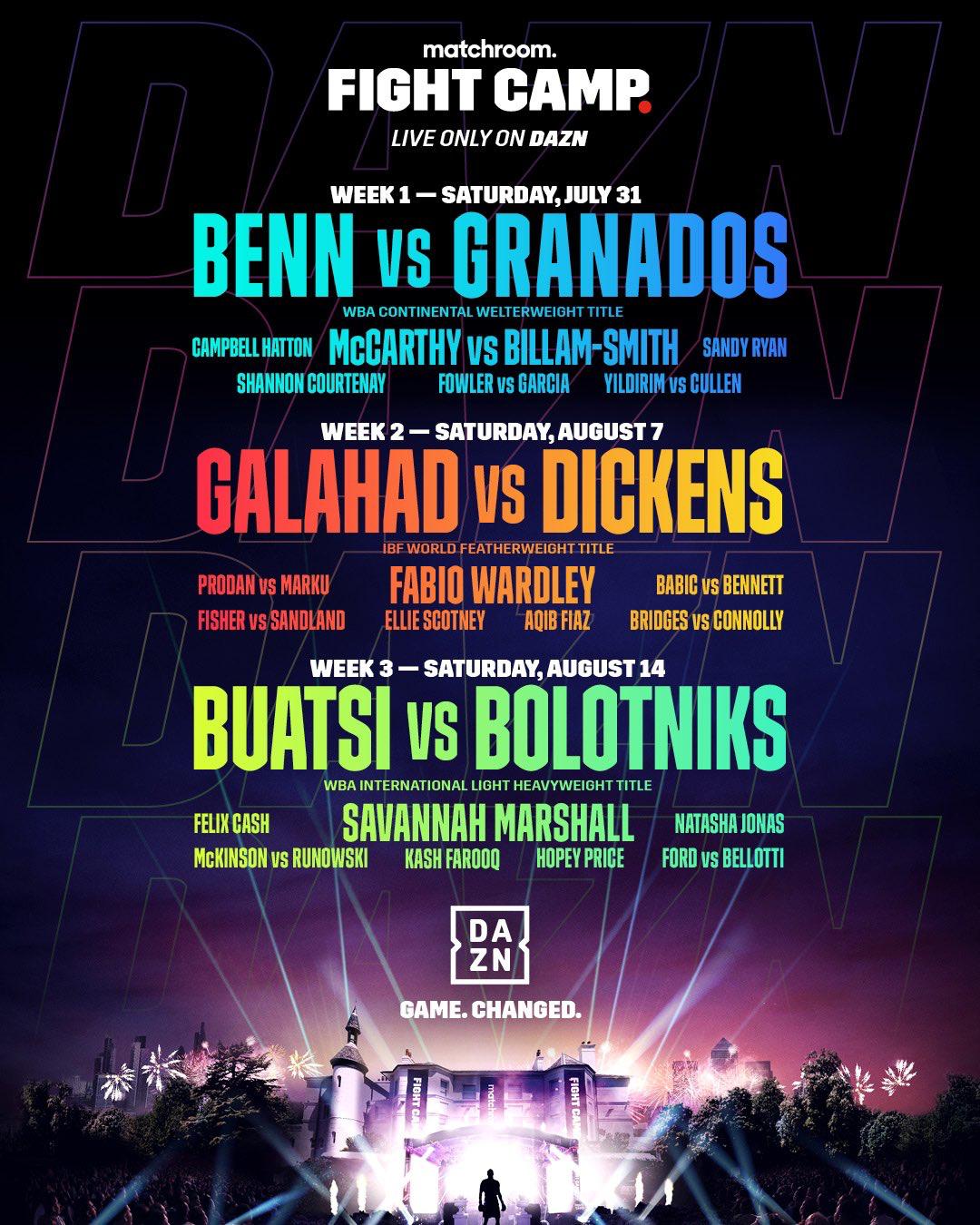 Matchroom and DAZN are delighted to announce the full schedule for the second instalment of Fight Camp – an unmissable summer of boxing based at the stunning Matchroom HQ in Brentwood, Essex – with all of the action broadcast live worldwide on DAZN for the initial monthly price of just £1.99 in the UK and €1.99 in Ireland.

Last summer, the unique and ground-breaking outdoor setting played host to memorable World Title clashes, British and Commonwealth Title showdowns, Heavyweight wars and countless other Title fights as Matchroom brought top tier boxing back to the screens of fights fans across the world – resulting in a nomination for Event of the Year at the Sports Industry Awards 2021.

DAZN, the leading global sports streaming platform, will kick off its landmark deal with Matchroom with an exhilarating Fight Camp series that features all-British World Title action, keenly anticipated domestic and European Title showdowns, some of the very best up-and-coming stars from Matchroom’s unrivalled stable of talent and much more.

This year’s sizzling summer schedule is set to be even bigger and better as Matchroom open their doors to fight fans – with a limited number of tickets going on sale for each event – which is sure to help create a special and unique atmosphere.

To become a subscriber, download the DAZN app on any internet-connected device, including living room devices such as smart TVs, streaming sticks and game consoles as well as smartphones, tablets, laptops, and PCs. For more information, visit www.DAZN.com

Information on the limited tickets available for Fight Camp will be announced in due course.

DAZN’s Co-CEO, James Rushton said: “As we kick off our game-changing global partnership with Matchroom, launching DAZN as the new home of boxing in the UK & Ireland and the global home of global boxing, we’re proud to unveil a Fight Camp season packed with some of the world’s best talent, with a few surprises still to come. We can’t wait to give fans a glimpse into our brand new boxing offering this summer – and we’re just getting started.”

Matchroom Boxing Chairman Eddie Hearn said: “I’m delighted to begin our game-changing partnership with the leading global sports streaming platform DAZN with another sizzling summer of Fight Camp action from our stunning HQ in Brentwood, Essex. Last year’s line up had it all – and this year’s series is set to be even bigger and better with addition of fans. One of the hottest properties in the Welterweight division Conor Benn gets things underway on July 31 when he puts his WBA Continental Title on the line against Adrian Grandos, the all-British clash for the IBF Featherweight World Title between Kid Galahad and Jazza Dickens is set to be a cracker at the top of Week 2 and rising Light-Heavyweight start Joshua Buatsi takes a huge step up when he takes on the MTK Global Golden Contract winner Richard Bolotniks at the top of Week 3. Watch it around the world live and exclusively on DAZN!”

ENDS
About DAZN Group
DAZN Group is one of the fastest growing sports media companies in the world. Headquartered in the UK and with employees in over 25 countries, our businesses touch every aspect of the way fans engage with sports; from production, through to content distribution and commercialization. DAZN Group is home to DAZN, the  leading global sport destination, as well as the popular sport portal, DAZN News. DAZN is leading the charge to give sports fans around the world access to sport anytime, anywhere. DAZN guarantees affordable access on most connected devices including smart TVs, set-top boxes, streaming sticks, smartphones, tablets, PCs and game consoles. DAZN is now live in more than 200 countries and territories after first launching in Germany, Austria, Switzerland and Japan in 2016. Visit https://media.dazn.com  for more information.

About Matchroom Boxing
Matchroom Boxing is the world’s leading boxing promotional outfit putting on major stadium and arena shows across the globe. Headed up by boxing supremo Eddie Hearn, Matchroom has been among the world leaders in major boxing promotion and production for over a quarter of a century since its launch in 1987. With an unrivalled stable of world-class fighters, Matchroom’s unique expertise in promotion, staging and television productions cements its position as the No.1 promoter in the sport.