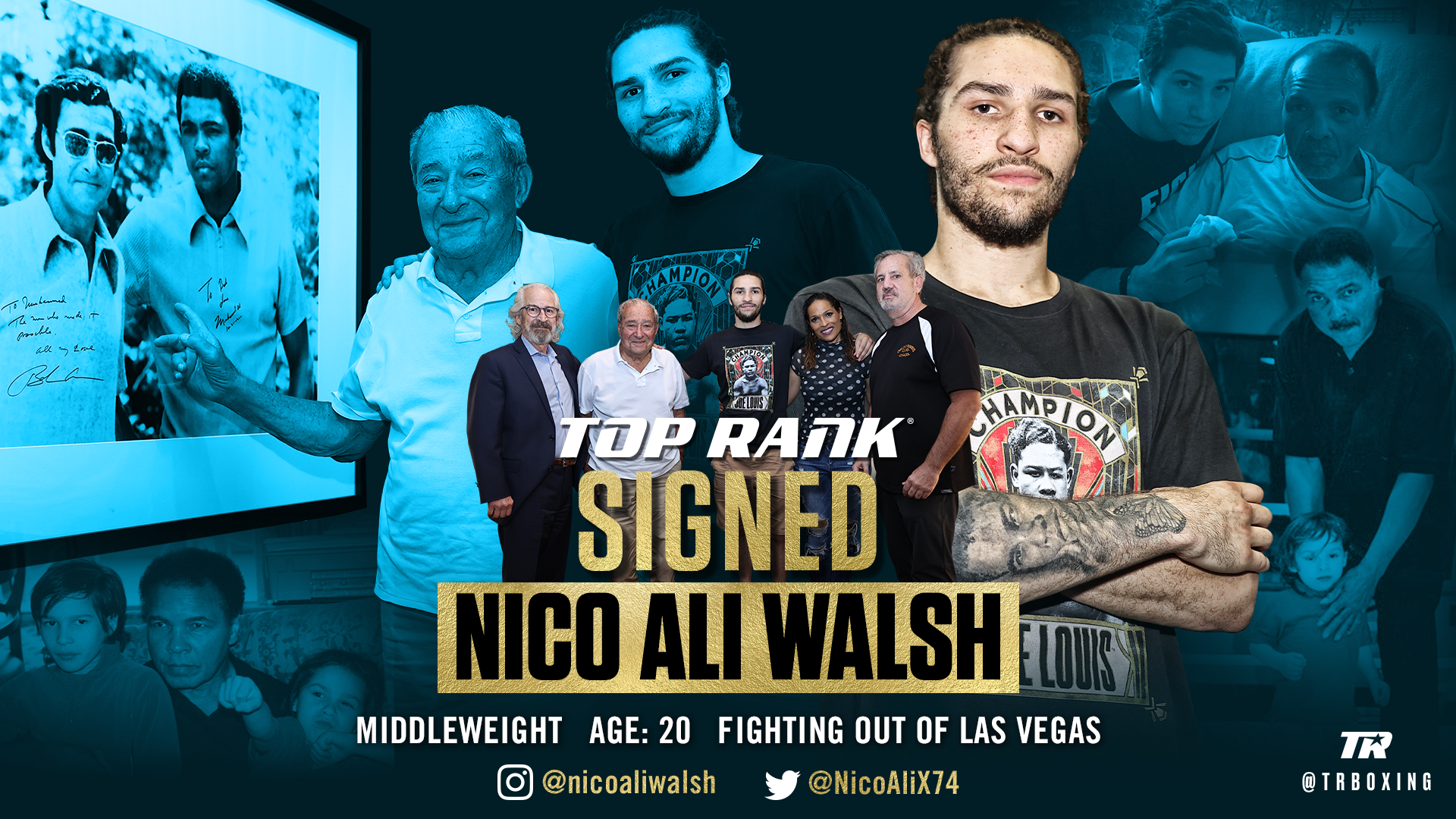 Nico Ali Walsh, the 20-year-old grandson of the “The Greatest,” Muhammad Ali, has signed a multi-fight promotional pact with Top Rank and will turn pro in a four-round middleweight bout Saturday, Aug. 14 live on ESPN.

“I’m doing what I love,” Ali Walsh said. “Signing with Top Rank is a dream come true. I’m going to have fun on Aug. 14 and the next time I fight. Top Rank will give me the name, date and location, and I’ll have a great time. I am honored to continue the fighting legacy that my grandfather started. It is a responsibility I don’t take lightly.”

Ali Walsh, who was born on Chicago’s South Side and now resides in Las Vegas, had roughly 30 amateur fights. As a young child in Chicago, he made his amateur debut at a benefit for St. Baldrick’s Foundation and broke out the Ali Shuffle. Ali Walsh graduated from Bishop Gorman High School in 2018 and is currently a full-time student at UNLV, where he is on track to graduate with a bachelor’s degree in business next spring.

He’ll be juggling classes and fighting as he embarks on his pro career under the guidance of Bob Arum, who promoted 27 of his grandfather’s fights, including the epic “Thrilla in Manila” bout against Joe Frazier and the rubber match against Ken Norton at Yankee Stadium. Ali Walsh’s uncle, Mike Joyce, brokered the deal with Top Rank and will serve as his nephew’s manager, agent and attorney.

“Family history and legacy was a big factor in Nico signing with Top Rank,” Joyce said. “I’ve signed many fighters to Top Rank, and Bob has always treated them fairly. Nico was a little bit in awe of Bob, and it cemented his belief that he was with the right promoter. He thinks this is going to be a historic journey.”

“Nico’s grandfather was a pretty good fighter,” Arum quipped. “Hopefully, Nico will emulate his success. He’s a young man of great character, which one would expect from Muhammad Ali’s grandson.”

Ali Walsh has enlisted a pair of Kronk Gym’s most notable figures for his in-ring development. SugarHill Steward, nephew of the late Emanuel Steward and the head trainer of WBC heavyweight world champion Tyson “The Gypsy King” Fury, will be his chief second. Richard T. Slone, who held numerous positions at Kronk and is now a world-renowned artist, will be in Ali Walsh’s corner as a trainer and cut man. During a recent training camp in Las Vegas, he sparred former world champion Julian Williams and unbeaten junior welterweight contender Shohjahon Ergashev.

Some of Ali Walsh’s earliest gym memories are with his grandfather by his side. Ali remains a symbol of sport and humanity to countless people, but to Ali Walsh, he’s the beloved grandpa he calls “Poppy.”

Ali Walsh said, “To me, I was hanging out in the gym with my grandfather. Sometimes I have to remind myself that he’s everyone’s idol.”