New York, New York (June 24, 2021)
There is just something about heavyweight boxing! On July 24, at the SSE Arena in Wembley, United Kingdom, CARLOS TAKAM (39-5-1 28KO’S) is set to fight JOE “THE JUGGERNAUT” JOYCE (12-0 11KO’S) with high stakes in the heavyweight division on the line.
While the fists will fly on July 24th in Wembley, the jabs have already begun on social media. Earlier this week, BT Sports, who will be airing the heavyweight bout, tweeted a video of Joe Joyce sparring, in which manager Sam Jones, warns Takam – “if [Takam] hits Joe clean in the early rounds it’s the worst thing that could happen because it will make Joe more mad and he will go to work.”

Takam did not take kindly to Jones words of advice, responding via his twitter @Carlos_Takam, “I am ready to work even before I am hit, this is the difference here. #TeamTakam”

Carlos Takam on Twitter: “I am ready to work even before …

I am ready to work even before I am hit, this is the difference here #TeamTakam https://t.co/XyKp8fnvm6

Takam respects Joyce as a fighter, but knows that a world title shot could be in the cards with a big time victory on July 24th. Jones was not afraid to counterpunch the Cameroon born heavyweight’s rebuttal, “He didn’t turn up to spar Joe [in] vegas, let’s hope he turns up July 24.”

Sam Jones on Twitter: “He didn’t turn up to spar Joe on…

He didn’t turn up to spar Joe on vegas let’s hope he turns up July 24 🙏 https://t.co/RG8bsyolWI

As things are heating up ahead of this highly anticipated heavyweight battle on social media, one thing is for certain, words are words, but only time will tell which man will rise to the occasion and take what he believes is rightfully his.
Joyce-Takam is promoted by Frank Warren’s Queensberry in association with Joe DeGuardia’s Star Boxing. 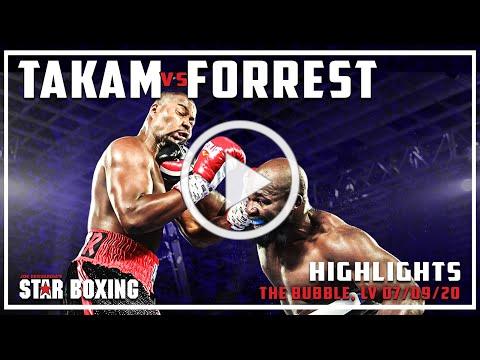 ‌
ABOUT STAR BOXING ®:
For over a quarter century Star Boxing has consistently delivered boxing events of the highest caliber that attract loyal fans from all corners of the globe.  Star Boxing has promoted events at practically every locale and on every network. From the Antonio Tarver – Roy Jones trilogy to the meteoric rise of Chris Algieri and Joe Smith Jr. through the critically acclaimed Rockin’ Fights Paramount Series, Star Boxing continues to develop world rated contenders and red-hot prospects into future world champions. Founded by its Hall of Fame promoter, Joe DeGuardia, an attorney, former boxer and respected boxing leader, Star Boxing has become revered worldwide throughout the industry for its credibility, integrity, and exciting fights.
For more information on Star Boxing, visit official website: www.StarBoxing.com
Advertisement