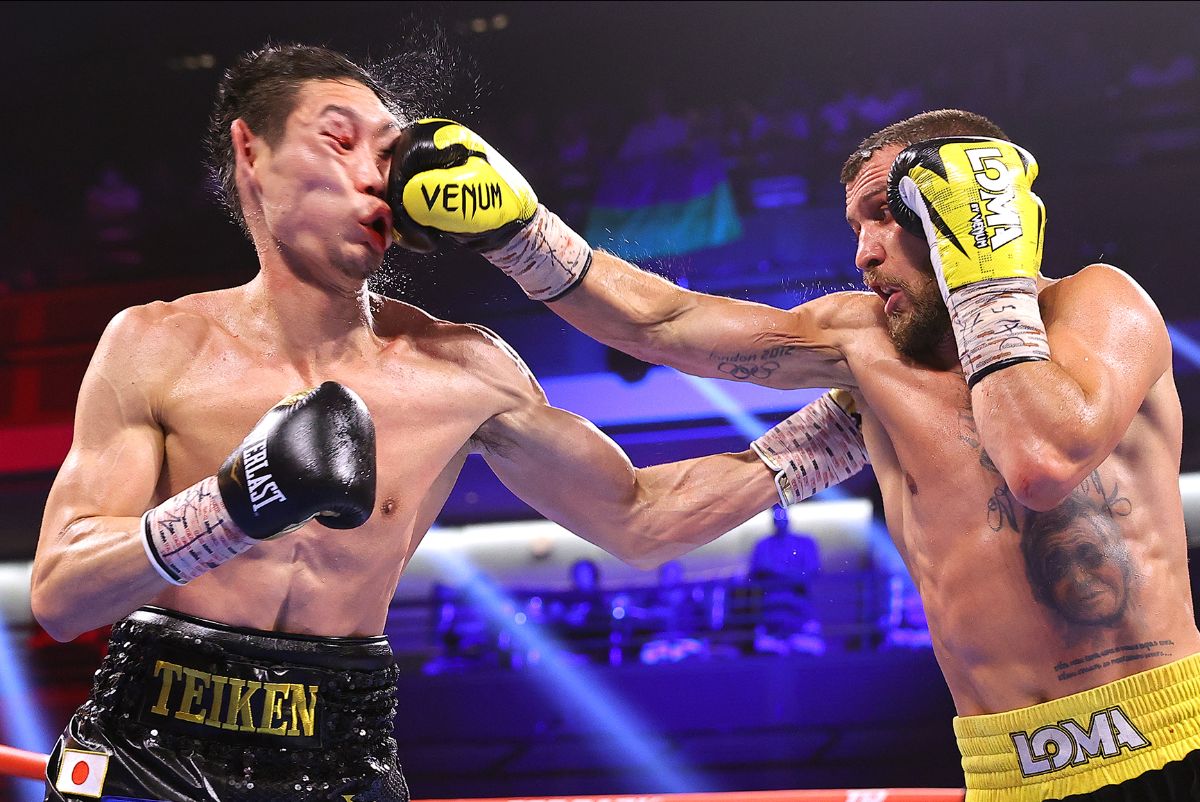 Lomachenko (15-2, 11 KOs) faced a hint of adversity when a headbutt opened up a cut in the opening round, but that would be the extent of his troubles. It was one-way traffic throughout, as Nakatani (19-2, 13 KOs) showed an incredibly sturdy chin but little in the way of offense.

In the fifth round, Lomachenko floored Nakatani with a left-right combination and proceeded to lay a savage beating on his Japanese opponent.  The end came in the ninth round when Celestino Ruiz called an end to the carnage.

Lomachenko now sets his aim on a rematch with Teofimo Lopez, who bested him last October in Las Vegas.

Lomachenko said, “I’m happy because I won. All the strategies that we developed with my team {worked}. I reached all my goals. I won and now I’m back on track.

“Everybody saw how I won this fight, and everybody is waiting for the rematch {with Lopez}, so let’s make a rematch.

“He has a fight in the future with {George} Kambosos, but how about after, in the beginning of next year? December, January, February, I am waiting.”

Added Top Rank chairman Bob Arum, “In case there was any doubt, Lomachenko proved he is still one of the very best fighters in the world. He is healthy and ready to fight any of the lightweights.”

The middleweight division has a new boogeyman, and his name his Janibek “Qazaq Style” Alimkhanuly. The 2016 Olympian bludgeoned and ultimately stopped former world champion Rob Bravo” Brant in eight rounds to retain his WBC Continental Americas and WBO Global titles.

The southpaw Alimkhanuly (10-0, 6 KOs) found a home for his straight left hand all evening, knocking Brant (26-3, 18 KOs) down in the sixth. After the eighth round, Brant’s corner saved their man from additional punishment, capping a one-sided exhibition.

Alimkhanuly said, “Tonight, I showed the world what ‘Qazaq Style’ is about. Rob Brant is a former world champion for a reason, but I came here to showcase my full arsenal, and that’s what I did.

“I am highly ranked, and I have the confidence to fight any middleweight in the world. I had a great training camp with Buddy McGirt, and this was the result of all the hard work we did in camp.”

Welterweight: Giovani Santillan (27-0, 15 KOs) UD 8 Cecil McCalla  (23-5, 10 KOs). Scores: 80-72, 79-73 and 78-74. Welterweight contender Santillan fought for the first time in more than a year and shook off the ring rust with a workmanlike decision over McCalla, a Maryland native who had won two straight entering the fight.

Heavyweight: Guido Vianello (8-0-1, 8 KOs) TKO 2 Marlon Williams (6-2, 3 KOs), :02. Vianello bounced back from last October’s draw to Kingsley Ibeh with a second-round blitzing of Williams. Vianello knocked down Williams twice in the opening round, and the bout was stopped early in the second when Williams wobbled coming out of his corner.

Junior Featherweight: Subaru Murata (1-0, 1 KO) TKO 2 Keven Monroy (1-2, 1 KO), 1:42. Former Japanese amateur phenom Murata, who is promoted by Teiken Promotions, shined in his professional debut. The southpaw landed a left cross on Monroy’s chin midway through round two, and that was enough for referee Russell Mora to stop the fight.

Lightweight: DeMichael Harris (4-0, 4 KOs) TKO 3 Jonatan Hernan Godoy (5-9), 3:00. Harris put on a show in his Las Vegas debut, knocking down Godoy three times in the third round. Godoy’s corner stopped the bout at the end of the round.