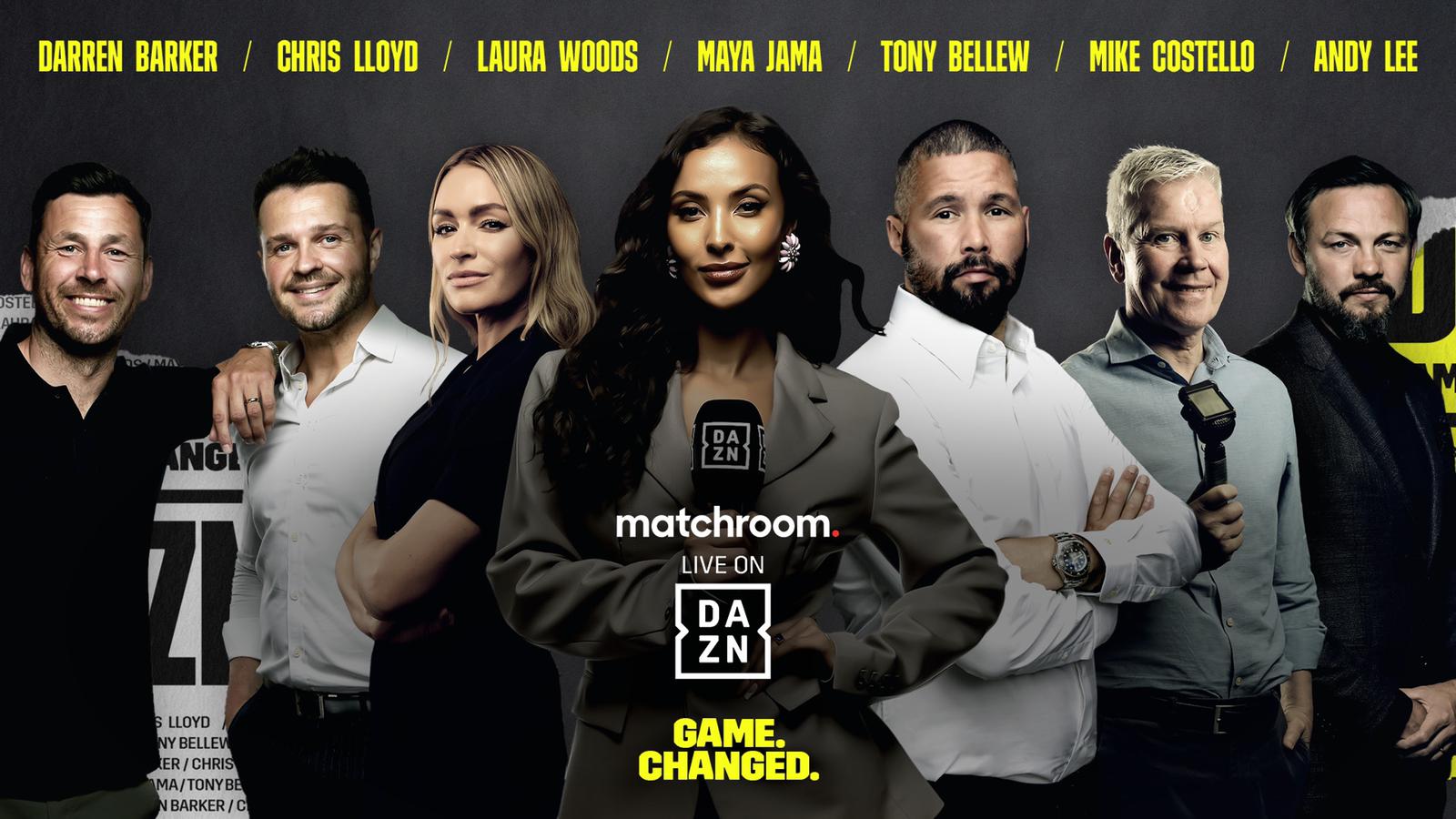 Following recent news of a game-changing five-year global deal, DAZN, the leading global sports streaming platform, and Matchroom, the leading international boxing promoter, are thrilled to announce details of their exciting new on-air talent roster loaded with some of the best broadcasters in sport.

This brand new on-air talent team will bring fight fans all of the ringside action, kicking off with an exhilarating second instalment of Fight Camp. Taking place at the stunning Matchroom HQ in Brentwood, Essex across three weekends – July 31, August 7 and August 14 – this festival of fights kicks off an unrivalled schedule for boxing fans and cements DAZN as THE global home of boxing.

In a huge coup for DAZN and Matchroom, British broadcasting legend Mike Costello will take the reins as the lead commentator, leaving his role as the BBC’s Boxing and Athletics correspondent after 15 years. Having covered seven Olympics and countless World Title fights during his glittering career at the BBC, Costello has established himself as one of the most popular commentators in sport today.

The UK’s most talked about TV and radio broadcaster Maya Jama brings a fresh perspective to the team. Maya is a hugely influential personality and has represented a variety of flagship shows for Channel 4, ITV and the BBC across TV and radio. Most recently, she co-presented the BBC show Save Our Summer and Year-Late Euros with former England striker Peter Crouch. And she has also hosted numerous award shows such as the MOBOs, BRITS and 2020 BAFTA red carpet.

Former WBC Cruiserweight World Champion Tony Bellew is one of the most well-known fight figures in boxing following his retirement from the sport in 2018. The former PPV star lit up stadiums and arenas across the world during a memorable career and has since gone on to carve out a career as a media personality as well as a leading pundit in the sport.

Laura Woods joins the team as the 2021 SJA Sports Presenter of the Year and one of the leading broadcasters in the sports industry. She is a regular weekly broadcaster on national radio and TV, hosting talkSPORT Radio’s Breakfast Show, one of the most listened to sports breakfast radio shows in the country.

Former WBO Middleweight World Champion Andy Lee remains one of the most prominent figures in boxing and holds a brilliant insight into coaching due to his involvement with Tyson Fury and Joseph Parker. The Irish fight legend possesses one of the sharpest minds in the sport and has quickly established himself as a fan favourite after stints with BBC Radio 5 Live and many more.

Former IBF Middleweight World Champion Darren Barker and expert analyst Chris Lloyd have built an excellent relationship since they started working with each other across the Matchroom fight week build up shows back in September 2018. Fight fans will be delighted that the dynamic duo will continue to bring all of the big fight week build up and much more.

To become a subscriber, download the DAZN app on any internet-connected device, including living room devices such as smart TVs, streaming sticks and game consoles as well as smartphones, tablets, laptops, and PCs. A special introductory offer of £1.99/€1.99 per month is currently available to UK and Ireland fans – for more information, visit www.DAZN.com

DAZN Group EVP Joseph Markowski commented: “This stellar line-up of broadcasters underlines our commitment to bringing in a new era of global boxing, providing fans with the very best experience, as we roll out fights and wider programming on a scale never seen before. Each presenter will bring their own unique perspective and style to our coverage, as we take a fresh approach to this fast-growing sport, and will engage existing and new fans alike.”

Matchroom Boxing Chairman Eddie Hearn said: “I couldn’t be prouder of this team of talent that we have assembled for our ground-breaking new project. The launch of Matchroom Media has enabled us to form a cradle to grave mindset across inception to completion of our shows so we can deliver the live event experience to the viewer in the narrative and style in which we have built it.

“It’s a real mixture of industry legends and fresh new talent that will give us the credibility and the energy to drive this new era forward. Mike Costello has long been the fan favourite for live boxing commentary, and we are honoured to welcome him to the team. Maya Jama is now one of the leading broadcasters and personalities in British television, and brings a great new perspective to the audience to the audience, as a boxing fan and well-known sports presenter. We can’t wait to get started with Fight Camp next month!”

Mike Costello said: “I’ve had such a great time at the BBC for so long that I’ve always said it would take something special to persuade me to leave that role and I get the impression this is that something special.

“I love the energy, ambition and passion around this new venture with DAZN and Matchroom. From black and white television, Boxing was one of the most popular sports where televised sports were growing. We then moved into the PPV and satellite era. Over the decades boxing has tended to move with the times in the media landscape and I think this is the next step of that journey.

“The clearest challenge is that on radio the task is to paint the pictures, on television the task is to add to what the viewers can already see. It’s a very different style of commentary but I have to bring all my experience from ringside on radio into television. This to me this is one of the attractions of the new role is taking on a new challenge at this stage of my career.

“This is a great chance for the big fights to happen more regularly and I’m looking forward to being the voice at ringside for many big nights to come.”

Maya Jama said: “I am thrilled to be joining DAZN and Matchroom. I’ve always loved boxing and this is a whole new adventure for me which I can’t wait to begin. I’m hoping to bring a new energy, flavour and vibe to one of my favourite sports and couldn’t be more excited to be working alongside such a fantastic and world class team.”

DAZN Group is one of the fastest growing sports media companies in the world. Headquartered in the UK and with employees in over 25 countries, our businesses touch every aspect of the way fans engage with sports; from production, through to content distribution and commercialisation. DAZN Group is home to DAZN, the leading global sport destination, as well as the popular sport portal, DAZN News. DAZN is leading the charge to give sports fans around the world access to sport anytime, anywhere. DAZN guarantees affordable access on most connected devices including smart TVs, set-top boxes, streaming sticks, smartphones, tablets, PCs and game consoles. DAZN is now live in more than 200 countries and territories after first launching in Germany, Austria, Switzerland and Japan in 2016. Visit https://media.dazn.com  for more information.

About Matchroom Boxing
Matchroom Boxing is the world’s leading boxing promotional outfit putting on major stadium and arena shows across the globe. Headed up by boxing supremo Eddie Hearn, Matchroom has been among the world leaders in major boxing promotion and production for over a quarter of a century since its launch in 1987. With an unrivalled stable of world-class fighters, Matchroom’s unique expertise in promotion, staging and television productions cements its position as the No.1 promoter in the sport.