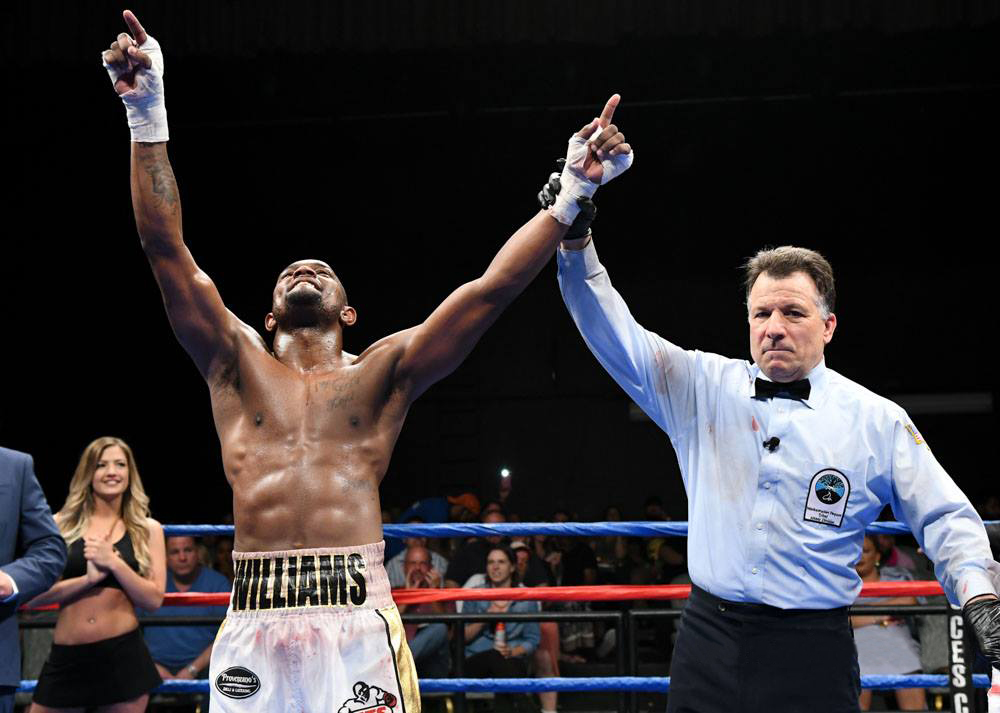 CES photo by Will Paul
FOR IMMEDIATE RELEASE
Friday, June 25, 2021

New Haven, CT (June 25, 2021) – It’s easy to dismiss a fighter after an unexpected loss. It’s easy to suggest he or she should move on, call it a career, and count their blessings while figuring out what to do with the rest of their life.

For Jimmy Williams, boxing is life. It’s what he’s done best since he was a teenager growing up in New Jersey. And even when he gave up on it for a few years to play college football and take his shot at the NFL, boxing was waiting for him with open arms again when an injury ended his dream of playing professionally.

Boxing has been Williams’ launching pad for success over the past eight years, so when he took an unexpected loss against a journeyman challenger in December, the 34-year-old New Haven, CT, veteran never flinched. While others whispered that this might be the end of his career, Williams continued to press forward. The outcome that night was irrelevant; two months removed from a devastating knockout loss to Brandun Lee, Williams needed that fight in December to prove he still had something left in the tank.

Six months later, Williams is back atop his perch, looking ahead to the next great challenge – and peering back at those who doubted – following the biggest victory of his career.

The proud father of twin boys and longtime truancy officer at West Haven High School is the new reigning Universal Boxing Organization (UBO) Super Welterweight Champion after defeating former world title-holder Yuri Foreman by majority decision this past weekend in Atlanta. Williams bloodied Foreman in the third round and floored him twice in the sixth en route to a 75-75, 77-73, 77-73 win, toppling a once dominant champion with 39 professional bouts and 35 wins under his belt, by far the most accomplished, respected opponent Williams has faced in his long career. Williams improved to 18-5-2 with the win.

There’s no way to underscore what this means for the “Quiet Storm.” Six months ago, Williams looked like a fighter with one foot out the door after losing in Mexico to 11-23-2 Esteban Villalba, by no means in the same conversation with a fighter like Foreman. Now Williams is on top of the world again in what he calls his true “prime,” all for one simple reason – he believed when others doubted. Can a 34-year-old challenger in the competitive super welterweight division still chase his dream of winning a world title? Why not? Williams has proven nothing is impossible.

“This is a dream come true,” said Williams, who has spent his entire career since the age of 26 under the guidance of promoter Jimmy Burchfield and CES Boxing. “Once this opportunity presented itself, I knew I had to take it. I knew a fight like this would bring out my world-class kills. I knew I had to be ready to go.

“Yuri Foreman, that’s a big name in boxing. People looked at me like I didn’t stand a chance. Even Foreman’s camp, I’m sure they looked back at my losses and how I lost and thought this was a fight they should win. On paper, it looked like a great fight for Yuri, but it was everything for me, and I showed why.”

The irony is this fight was originally scheduled to take place in Louisville, KY, in March, further back during the heart of the COVID-19 pandemic. Williams spent his camp working for the first time with Rhode Island-based trainer Brian Johnson, at first commuting back and forth from New Haven to Providence before living out of a hotel during the final weeks before the fight to cut down on his travel. Everything was coming together perfectly; Williams felt a new sense of purpose under Johnson, whom he considered a father figure – Williams lost both of his parents during his teen years – and even back then spoke about being in his prime despite having eight years under his belt.

Then the unthinkable happened. Foreman, who felt ill leading up to the bought, tested positive for COVID at the weigh-in, forcing the promoter to postpone the fight. In boxing, postponements and promises of a make-up date often turn into cancelations, and with Foreman having just turned 40 not knowing what his future would bring, Williams wasn’t sure he’d get this opportunity again.

As fate would have it, the bout was, in fact, rescheduled for this past weekend fairly early in the process, so Williams didn’t lose much time between the end of his first camp and the start of the new one. Then fate intervened again. With Johnson unable to accompany Williams to Atlanta for the fight, Williams was forced to find a new home to finish his camp with a little more than a week to go before fight night. He decided upon Champs Boxing Club in nearby Danbury – the home of several pro fighters, including Omar Bordoy, Mike Marshall, Vinnie Carita, and Geoffrey Then, among others – and met with trainers Tommy Smalls and Dave McDonough, both of whom welcomed him with open arms. Their motto – “You give us 100 percent, and we’ll give you 150 percent.”

Smalls and McDonough weren’t just opening their doors to let Williams ride out the rest of his camp. They traveled this journey with him, watching film, implementing new techniques, and providing the necessary guidance to help Williams get over the hump. He worked hard and they worked even harder. On fight night, it all clicked – something that doesn’t always happen when working with a new team on short notice. When Williams had to weather an early storm between rounds, Smalls and McDonough kept him calm and focused in the corner, and Williams responded with a championship performance, catching his second wind in the sixth round to score the two knockdowns that ultimately won him the fight.

“They prepared just like I did, so I was prepared,” Williams said. “I was little nervous deep down, but once I got to Champs, I was like, ‘OK, this is going to work.’ It just felt like we were all on the same page.

“Putting [Foreman] down twice in the sixth, that was the turning point. In my head, I knew I was up, so I just had to box and use my skills. I knew he would try to land a big shot to even it up, so it was a mental game at that point, but I believed in my skills and my willpower. I learned a lot about myself.”

As for what’s next following his big win in Atlanta, Williams promises to remain patient and make the smart choice. He’s found a new team at Champs, proving chaos can often be a blessing in disguise. Williams overcame a lot to get to this point – losses in the ring, heartbreak at the weigh-in, even unexpected turmoil right before fight night. Doubt him again and he’ll just continue to prove there’s no expiration date on guts and perseverance.

“This win definitely gets me back in the mix,” Williams said. “I feel like I’m in my prime now. The football, everything else, that’s behind me. I’ve grown as a fighter. I’m experienced and feel like I’m at my peak now.”

INFORMATION
CES Boxing is one of the top promotions in the northeast and one of the few to successfully promote both mixed martial arts and professional boxing. Launched in 1992 by longtime boxing judge Jimmy Burchfield Sr., the promotion is the only in professional boxing to boast two reigning WBC Youth world champions in lightweight Jamaine Ortiz and featherweight Irvin Gonzalez. CES Boxing recently teamed with UFC Fight Pass, the world’s No. 1 streaming platform for combat sports, to showcase its events to a worldwide audience.
–CES–