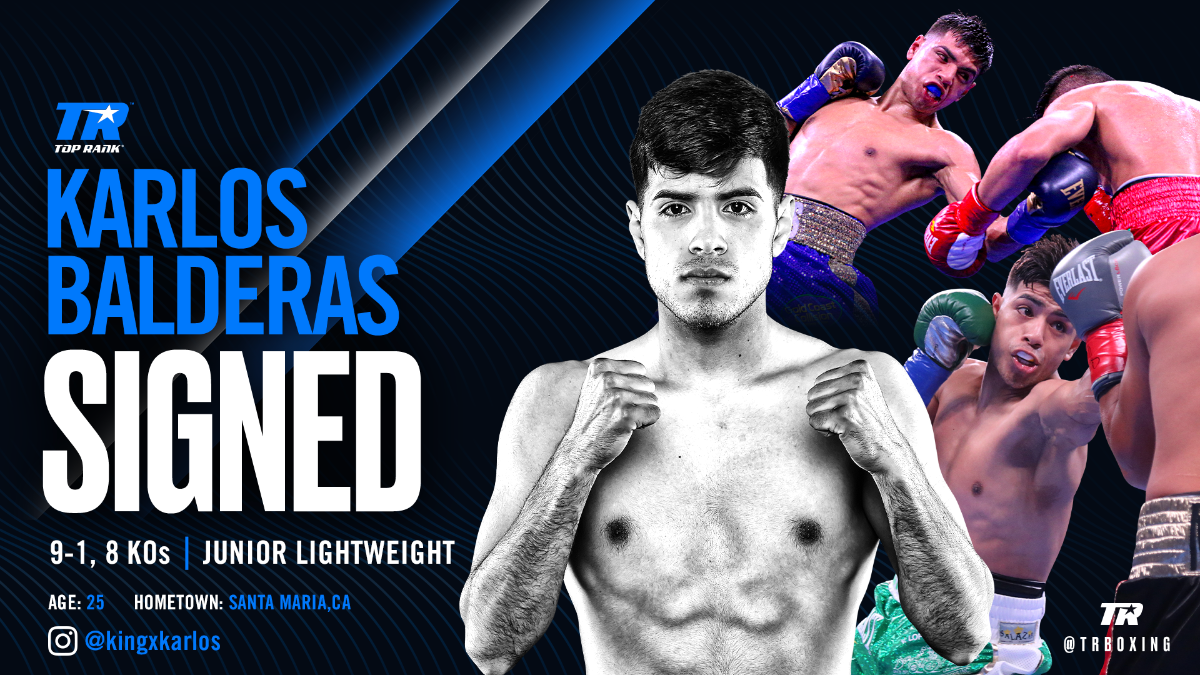 LAS VEGAS (July 1, 2021) — Karlos Balderas, a decorated 2016 U.S. Olympian, has launched the next chapter of his professional career by signing a multi-fight promotional pact with Top Rank. The 25-year-old Balderas, from Santa Maria, California, will make his Top Rank debut Saturday, Aug. 14.

After fighting most of his professional bouts as a lightweight, Balderas will now campaign as a junior lightweight. He will make his world title charge with Buddy McGirt as his head trainer and a new manager, Sam Katkovski of Churchill Management.

“Karlos Balderas was one of the most talented fighters coming out of the 2016 Rio Olympics, and I strongly believe he still has what it takes to become a world champion,” said Top Rank chairman Bob Arum. “Buddy McGirt is a fantastic trainer who I’m confident will tap into Karlos’ boundless potential.”

Balderas said, “When I first turned pro, deep down inside, I knew Top Rank was the way to go. With the talent and excitement I bring to the table, they’re going to promote the hell out of me. Thank you to Sam Katkovski, Bob Arum, and everyone at Top Rank. I always come back better and stronger. Don’t believe me? Just watch!”

Balderas (9-1, 8 KOs) advanced to the quarterfinals of the lightweight bracket at the Rio Olympics, the conclusion of a reported 175-9 amateur ledger that included victories over the likes of Ruben Villa and Hector Tanajara. He turned pro in April 2017 with a first-round stoppage and notched nine wins in his first two-plus years in the paid ranks before suffering a stunning sixth-round stoppage at the hands of Rene Tellez Giron in December 2019. Balderas has not fought since the Giron defeat, but with a new manager, trainer, and promoter, the road towards a title begins Aug. 14.