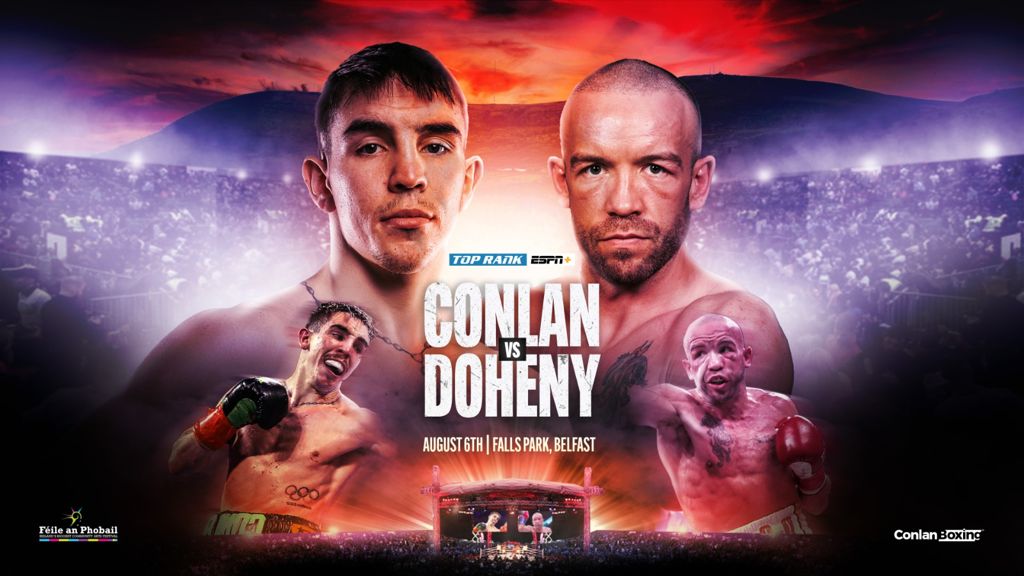 BELFAST (June 30, 2021) — The fighting pride of West Belfast, Michael “Mick” Conlan, is primed for a summer homecoming for the ages. Conlan, the WBO No. 1 junior featherweight contender, will defend his WBO Intercontinental title against former world champion TJ Doheny in a 10-round showdown Friday, Aug. 6 at Falls Park in Belfast as part of the Féile an Phobail festival.

Promoted by Conlan Boxing, Conlan-Doheny and undercard fights will stream live and exclusively in the United States on ESPN+ starting at 3 p.m. ET/12 p.m. PT.

“This is a big test for Mick, as Doheny is a formidable foe who won’t be intimidated fighting in front of the partisan Belfast crowd,” said Top Rank chairman Bob Arum. “He wanted a Belfast fight, and I am thrilled that his loyal fans will get to see him in person once again.”

Added Jamie Conlan, CEO of Conlan Boxing: “Michael and I are honored and excited to bring live boxing back to Belfast. Everyone has been working hard behind the scenes to make this event possible during these crazy times and now there is light at the end of the tunnel. Both Michael and TJ have Irish pride on the line, but they see each other as the perfect dance partner to reach the world title level. It has all the ingredients for a fantastic fight.”

Conlan (15-0, 8 KOs) became an Irish sporting folk hero after an amateur career that saw him win a 2015 World Championships gold medal and qualify for a pair of Olympic Games. He captured a bronze medal in London in 2012 and turned pro after a well-publicized robbery — and a double middle finger salute toward the judges — at the 2016 Rio Olympics. He’s fought in Belfast twice as a pro, selling out the SSE Arena Belfast in 2018 and packing nearly 10,000 fans into Falls Park in August 2019. He last fought in April and made his junior featherweight debut with a 12-round majority decision over noted spoiler Ionut Baluta.

Conlan said, “I’m excited to be back fighting in my city. It was special in 2019, but I believe this year it will be even better as we haven’t had live events due to the pandemic. On Aug. 6, we will show Belfast is back!

“It will be an honor to share the ring with TJ. I have a lot of respect for him and his achievements. I believe it’s my toughest fight to date, and with that, I will make my biggest statement in my quest to become a world champion.”

Doheny (22-2, 16 KOs), from Portlaoise, Ireland, reached the pinnacle of the sport when he upset Ryosuke Iwasa by unanimous decision in August 2018 to win the IBF junior featherweight world title. He made one defense of the title before losing a hotly contested title unification matchup against Daniel Roman. Following a comeback victory, he was upset via eight-round unanimous decision against Baluta, who went on to knock out former Irish amateur star Davey Oliver Joyce before fighting Conlan.

Doheny said, “This will be my first time fighting on Irish soil, and I can’t think of a better homecoming. It doesn’t get much bigger than this for an all-Irish clash, and the fans are in for a real treat. This is the kind of fight that I have been craving since my close majority decision loss to Daniel Roman. Top opposition is what motivates me and helps me raise my game. I cannot wait for this.”