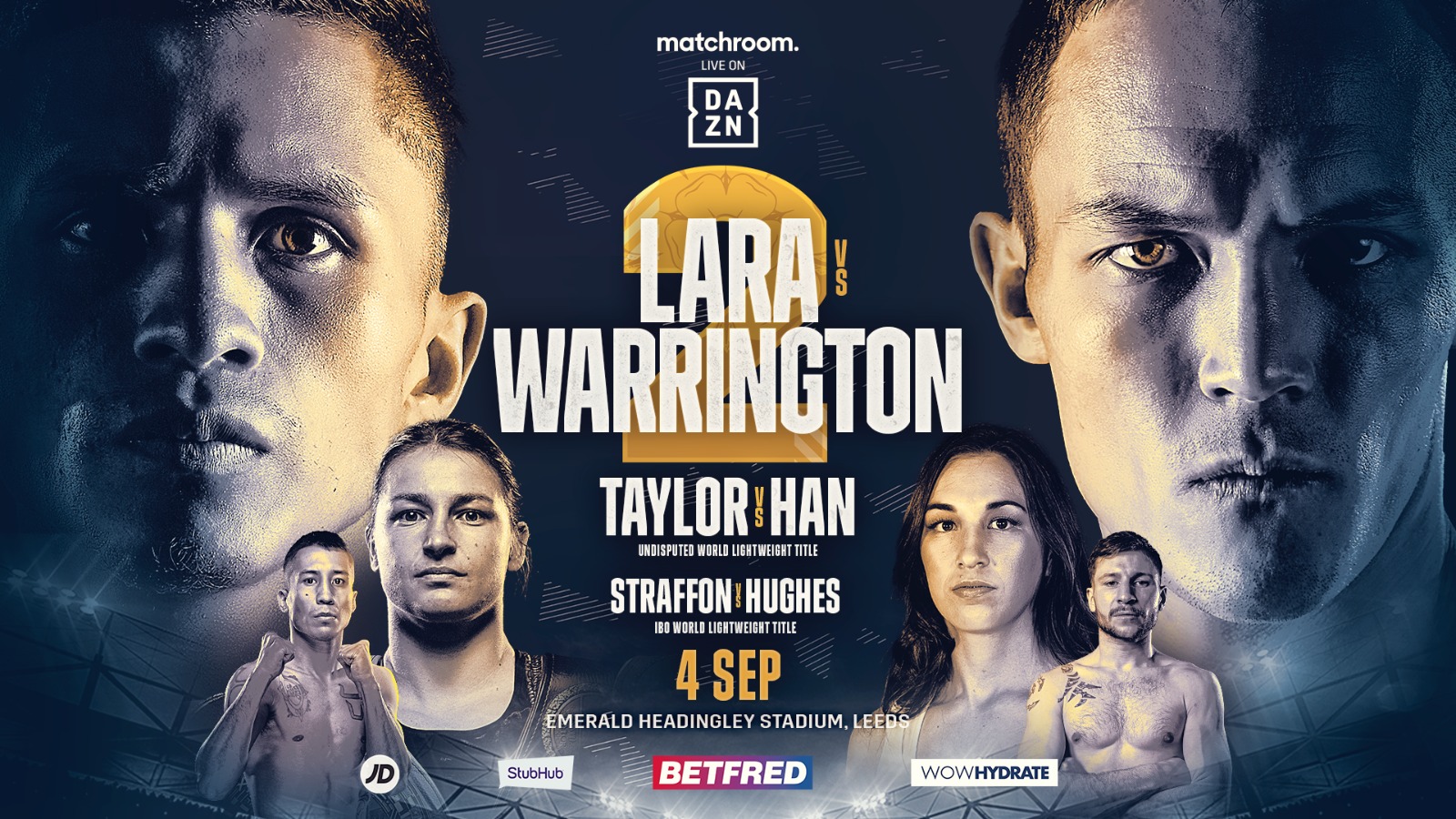 All action broadcast live worldwide on DAZN for a special introductory price of just £1.99 in the UK and €1.99 in Ireland

Mauricio Lara and Josh Warrington will rematch in an epic showdown at Emerald Headingley Stadium on Saturday September 4, live worldwide on DAZN. The co-main event will also feature undisputed Lightweight World Champion Katie Taylor, who puts all her belts on the line against IBF Mandatory Challenger Jennifer Han.

‘The Leeds Warrior’ (30-1, 7 KOs) was floored and ruthlessly finished by Mexico’s Lara (22-2, 15 KOs) in a sensational knockout loss at The SSE Arena, Wembley in February that put a massive dent in the former IBF Featherweight World Champion’s unification plans.

Warrington endured a stunning upset defeat as he was dropped and nearly stopped in the fourth round before ‘Bronco’ sent him crashing to the canvas again in the ninth to end the 30-year-old’s unbeaten record.

The upset-of-the-year contender sent shockwaves through the 126lbs division and now Warrington will look to exact revenge in front of a capacity crowd at the home of the Leeds Rhinos in the biggest fight of his career. Undisputed Lightweight ruler Taylor (18-0, 6 KOs) defends her WBC, WBA, IBF, WBO and Ring Magazine crowns against her latest Mandatory Challenger Han (18-3-1, 1 KOs) in the co-main event, another huge stage for the best in women’s boxing.

The Irish star was forced to dig deep as she retained her World Titles via a unanimous decision victory after another memorable meeting with Natasha Jonas last time out at Manchester Arena in May – nine years on from their London 2012 Olympic Games bout.

Han, a six-time national amateur champion fighting out of El Paso, Texas, won the vacant IBF Featherweight World Title against Helen Joseph in September 2015 and went on to make four defences of her Title – most recently against Lizbeth Crespo in February 2018.

“I’ve never been much of a talker, I’d rather do my talking in the ring,” said Lara. “I’m going for a repeat performance on September 4. Hit once, hit twice. Warrington should know that I am coming for him. This is all about pride. This is for Mexico!”

“It’s been an up and down period, time for reflection and to reassess myself, said Warrington. “I’ve watched the first fight a dozen times, I’m mentally and physically prepared for Mauricio. It won’t be the same result, I want revenge. It’s going to be a huge event in Leeds, I can’t wait to get back in there and rewrite the script. It’s nothing personal, just business. September 4th we get back on track to the top.”

“I’m really excited to defend my Titles in front of a live crowd again and especially in Leeds,” said Taylor. “I grew up as a Leeds United fan so it’s fantastic to see them back in the Premier League and doing so well again.

“My last few fights have effectively been behind closed door and it’s definitely a strange experience so I think to have crowds back again and outdoors in Leeds will make for a very special atmosphere. I’m back in the US in training camp, working hard and focused on putting in another big performance against a tough and experienced opponent on September 4.”

“I want to thank Katie for this opportunity,” said Han. “Enjoy your belts while you still have them. I will see you in September.”

Fresh from his devastating first round demolition job on James Tennyson, Mexico’s Jovanni Straffon (24-3-1, 17 KOs) will make the first defense of his IBO Lightweight World Title against the in-form Maxi Hughes (23-5-2, 5 KOs).

‘Impacto’ dropped and stopped Belfast’s Tennyson in a powerful performance at Manchester Arena in May to become the latest Mexican to spring an upset against British opposition in the UK.

The full supporting undercard will be announced shortly.

“What better way to celebrate the return to normality for boxing than 20,000 passionate Leeds fans at Headingley Stadium. This is the biggest fight of Josh Warrington’s career and this time he has his city behind him in a must win fight that can only be a thriller,” said Eddie Hearn, Matchroom Sport Chairman. “The greatest female fighter of all time Katie Taylor faces Mandatory Challenger Jennifer Han in another great fight. Katie is a lifelong Leeds United fan and I know how excited she is to fight in the city. Another Mexican upsetter Jovanni Straffon tries to derail the fairy tale story of Yorkshire’s Maxi Hughes who looks to take a giant leap in the World Lightweight landscape. There’s plenty more additions to be announced shortly in what will be a huge night of boxing live on DAZN.”

“Our game-changing global partnership with Matchroom has kicked off with an epic line-up, starting with Fight Camp – an unmissable summer of boxing based at the stunning Matchroom HQ in Brentwood, and leading into this huge double-header event. With many surprises still to come for the months ahead, this cements DAZN as the global home of boxing,” said Joseph Markowski, EVP at DAZN Group.