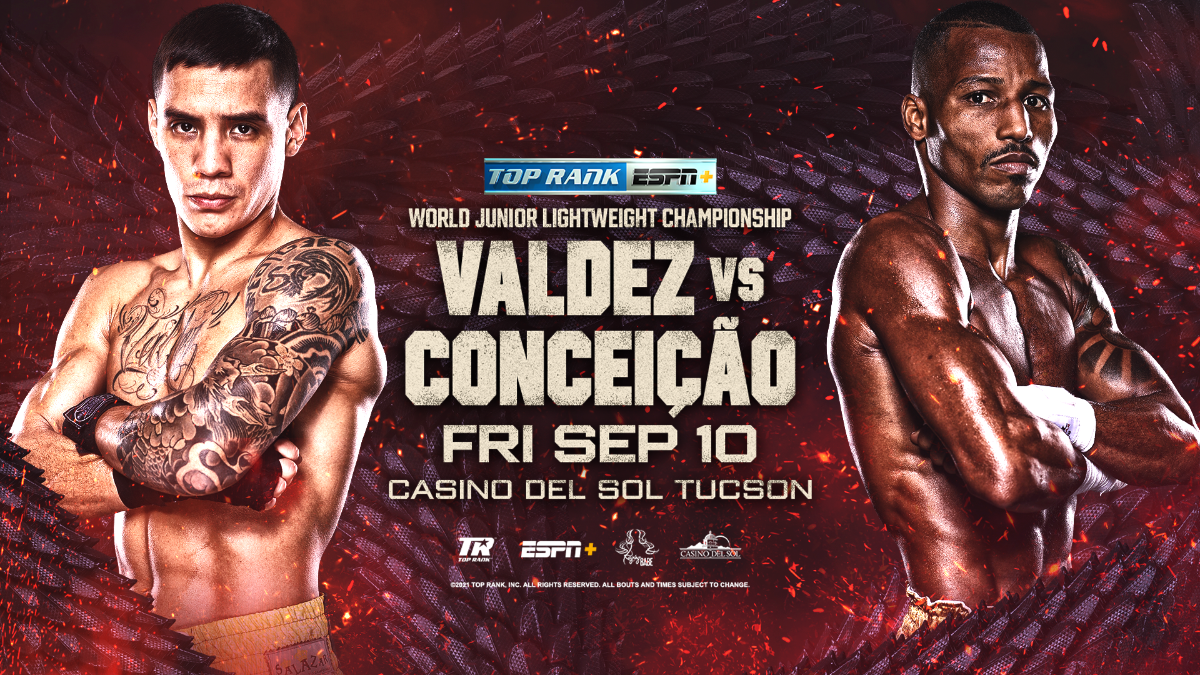 TUCSON, Ariz. (July 20, 2021) — WBC super featherweight world champion Oscar Valdez authored a title-winning knockout for the ages in February over Miguel Berchelt. For his encore — and the first defense of his title — the undefeated two-time Mexican Olympian will make his desert homecoming.

Valdez (29-0, 23 KOs) will look to make it 30 for 30 against undefeated 2016 Brazilian Olympic gold medalist Robson Conceição on Friday, Sept. 10 from the AVA Amphitheater at Casino Del Sol in Tucson, Arizona.

A native of Nogales, Mexico, Valdez moved to Tucson as a young child and spent his elementary school years there before returning to Mexico.

Promoted by Top Rank, tickets starting at $25 go on sale Tuesday, July 27 at 10 a.m. MST and can be purchased by visiting Etix.com.

“Oscar Valdez is coming off a career-best performance and wants to put on a spectacular showing in front of the great Tucson fans,” said Top Rank chairman Bob Arum. “Conceição has been waiting for this shot ever since he turned pro, and having promoted him for his entire career, I know he’ll be at his very best. We have a great co-feature, as the young Flores wants to prove he is a contender to watch, and he can do that by beating a tough Mexican in Luis Alberto Lopez.”

Valdez cemented his status as one of the faces of Mexican boxing with his 10th-round knockout over longtime champion Berchelt. He is 8-0 in world title fights, including six defenses of the WBO featherweight world title he won in July 2016. Valdez and Conceição fought as amateurs in the gold medal match of the 2009 Pan American Games, with Conceição prevailing by a single point. Valdez turned pro nearly four years before Conceição (16-0, 8 KOs), who made history as the first Brazilian boxer to capture Olympic gold. A native of Bahia, Conceição made his pro debut in November 2016 on the Manny Pacquiao-Jessie Vargas undercard and knocked out four of his first five foes. Last October, he survived an early knockdown to edge Louie Coria by unanimous decision. He last fought April 10 in Tulsa and knocked out Jesus Antonio Ahumada in the seventh round.

“I am very excited to fight in my second home, Tucson, Arizona, where I will have my first defense of the WBC super featherweight world title,” Valdez said. “It motivates me to know that I will defend the title in front of my friends and my family, and I will be willing to put it on the line as in all my fights. I’m coming to give a great show to my people, and I can’t wait to see you on Sept. 10.”

Conceição said, “I’ve been waiting my whole life for this opportunity, and that’s why I’m training with great determination. I will represent my family and Brazil. I already won a gold medal for my country and now I will bring home a world title. With great determination, I will deliver a great performance. It will be a true spectacle!”

Flores (20-0, 7 KOs) made history in 2017 when, at 16 years old, he became the youngest fighter ever to sign a promotional contract with Top Rank. He went 3-0 in 2020, including a shutout decision over Matt Conway on the Deontay Wilder vs. Tyson Fury II undercard. Flores performed three times inside the MGM Grand Las Vegas Bubble, punctuated by a sixth-round stoppage over former world title challenger Jayson Velez in February. Lopez (22-2, 12 KOs), from Mexicali, Mexico, has won five straight bouts since a 2019 decision loss to Ruben Villa. He notched his signature win last July with a split decision over Andy Vences.

“This is the next step in my journey towards a world title, and I will convincingly defeat Lopez,” Flores said. “I’m going to prove once again that I’m ready for the next level.”

Lopez said, “I appreciate matchmaker Brad Goodman and Top Rank for the opportunity to fight Gabriel Flores Jr. I know he’ll be prepared to give everything on Sept. 10, but so am I, and I guarantee nothing but my very best. I’m a man of few words, and I’ll let my actions do the talking inside the ring.”

The undercard, streaming live and exclusively on ESPN+, will feature Japan’s undefeated WBO flyweight world champion Junto Nakatani (21-0, 16 KOs) defending his title against Puerto Rican former world champion Angel “Tito” Acosta (22-2, 21 KOs). Nakatani, who has never fought outside of Japan, knocked out Filipino contender Giemel Magramo in eight rounds last November to win the vacant world title. A former Japanese flyweight champion, Nakatani has won four straight bouts by stoppage. Acosta, who made three successful defenses of the WBO light flyweight crown, has won two fights since a debated 12th-round stoppage at the hands of Elwin Soto. Acosta was leading on all three scorecards when he was stopped on his feet early in the round.

The ESPN+ undercard will also see undefeated Puerto Rican sensation Xander Zayas (9-0, 7 KOs) in a six-round junior middleweight bout against an opponent to be named and lightweight sensation Raymond Muratalla (12-0, 10 KOs) in an eight-rounder.