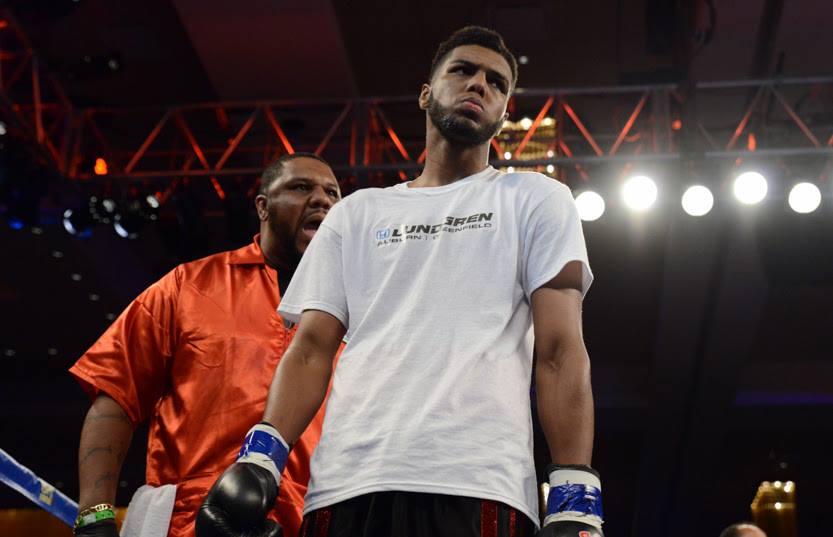 CES photos courtesy of Will Paul
KENDRICK BALL JR., right, of Worcester, MA, defends his WBC USNBC Silver Super Middleweight Title in the main event of CES Boxing’s MGM Springfield debut on Saturday, August 7 against challenger Tyi Edmonds of Meridian, MS. Edmonds, the son of former pro boxer Tim “TNT” Edmonds, is looking for his 15th victory as a pro in what would be the biggest win of his career.
FOR IMMEDIATE RELEASE
Tuesday, August 3, 2021
With plenty more at stake, Ball and Edmonds lock horns August 7 for WBC title
Super middleweight warriors aim for career-defining victory at MGM Springfield
Providence, RI (August 3, 2021) – There’s that old saying about learning to crawl before you walk, and it’s something boxers adhere to when laying out the blueprint to what they hope is a long, lucrative career.
All fighters start small, typically fighting in or around their hometown, building both their record and their fan base before wading into deeper waters. Eventually, they all want to break free from the tiny bubble which constrains them and make a big splash. Sometimes that requires rolling the dice.

The eight-round headliner between Ball and Edmonds features two fighters on similar career paths with everything to gain, most notably a major regional championship in addition to a much clearer path to the top of their weight class.

Tickets for the event are available online at CESFights.com. The August 7 professional boxing showcase is part of a full weekend of combat sports in Springfield, which includes CES MMA 63 on Friday night, promoted by CES’ mixed martial arts division.

For Ball, it’s an opportunity to continue the slow, steady climb that began five years and reached its peak in April when he defeated former world-title challenger Brian Vera in New Hampshire to capture the WBC crown. As they say in combat sports, you’re not the champion until you defend the title, and Ball has his work cut out for him in first defense Saturday night.

“I feel like my time is now,” said the soft-spoken Ball, who turns 29 in September. “Even as an amateur, it took me a while to come into my own, so I knew it’d be the same thing in the pros. But I feel good right now. It’s my time.”

Ball has every reason to beam with confidence heading into Saturday’s event. In facing Vera, Ball effectively chopped down a fighter he admits he watched while growing up, a fighter who had been on the sport’s biggest stage several times in his prime. With the win, Ball further cemented his status as one of the sharpest super middleweights in boxing while subsequently entering his own prime. At 29, there’s the potential for major opportunities on the horizon if he continues his winning ways.

The victory over Vera was his seventh in a row since 2018, a streak that has helped him inch closer to the top of his weight class. Likewise, beating a well-recognized fighter like Vera has created a considerable “buzz” in Worcester, according to Ball. The 6-foot-2 righty joined several of his Worcester stablemates last week to throw out the ceremonial first pitch at Polar Park for the Worcester Red Sox’ game and fan interest has increased steadily since April. People in and around the city are now clamoring to know when Ball fights next, and this upcoming bout on Saturday is good enough to generate an even louder buzz than last time.

“The support has been so much bigger since the last fight,” Ball said. “That was definitely my best performance, and I need to keep it going.”

Edmonds, meanwhile, comes from a much humbler background. While Worcester is known throughout the northeast as a tough, working-class city synonymous with building champions in professional boxing – i.e. Jose Antonio Rivera and Edwin Rodriguez, Edmonds’ hometown of Meridian hasn’t historically been a hotbed for emerging talent in combat sports.

But Edmonds, who turned 29 in January, comes from strong, talented bloodlines. His father, Tim “TNT” Edmonds, boxed professionally in the late 1990s, and his son spent many days and nights with him at the gym learning the craft and soaking up as much knowledge as possible. That led the younger Edmonds to pursue a career of his own, which began in 2011 at the age of 19, much earlier than Ball.

Aside from boxing, Edmonds also took the time to learn a trade and works as a licensed electrician, which, he says, not only gives him “something to fall back on,” but also helps him afford to take additional time for training; he can work enough jobs in a short amount of time to save money and then dedicate several weeks strictly for training.

Like Ball, he’s looking for that signature moment in boxing that can ultimately define his career. He’s also on a similar hot streak, having won nine of his last 10 with the only blemish being a no contest against 11-0 Isaiah Steen in a fight that ended after four rounds due to an accidental foul. The opportunity to face Ball and fight for a title was too good to pass up.

“This is something I’ve been waiting for – an opportunity to prove myself,” Edmonds said. “I’m not interested in fights that don’t do anything for me. This makes sense. I’m trying to climb the ladder as fast as I can.

“It’s great to be known in Meridian, Mississippi, but I don’t want to limit myself to just that. I want to be worldwide and make my mark in boxing before I leave.”

Stopping short of making a prediction, Edmonds added, “I hope it doesn’t go the distance. Either way, we’re prepared.”

Ball is equally aware of the challenge at hand, noting Edmonds “is a decent fighter – tall like me.” Winning a WBC belt and taking another step forward is an opportunity any fighter would dream of. Ball and Edmonds have everything in front of them, including the chance to earn name recognition and a seat at the table among the sport’s elite super middleweights.

In a bout that could steal the show, unbeaten welterweight Josh Wagner (7-0, 5 KOs) of Ontario puts his perfect record on the line against fellow unbeaten Jeffrey Torres (7-0, 3 KOs) in the six-round co-main event. Manchester, CT, super welterweight Jose Rivera (8-4-1, 5 KOs), fights in New England – and with CES – for the first time in more than two years when he takes on Mitch Louis Charles (6-2-2, 3 KOs) of Quebec, who now lives and trains in Boston, in a six-round special attraction.

The August 7 event also features the return of Springfield featherweight Joshua Orta (6-0, 2 KOs), who makes his second appearance with CES and first since inking a long-term agreement with the promotion in June. Orta faces veteran Esteban Aquino (12-8, 7 KOs) in a six-round bout; born and raised in the Dominican Republic, Aquino now fights out of New York City following a two-year layoff.