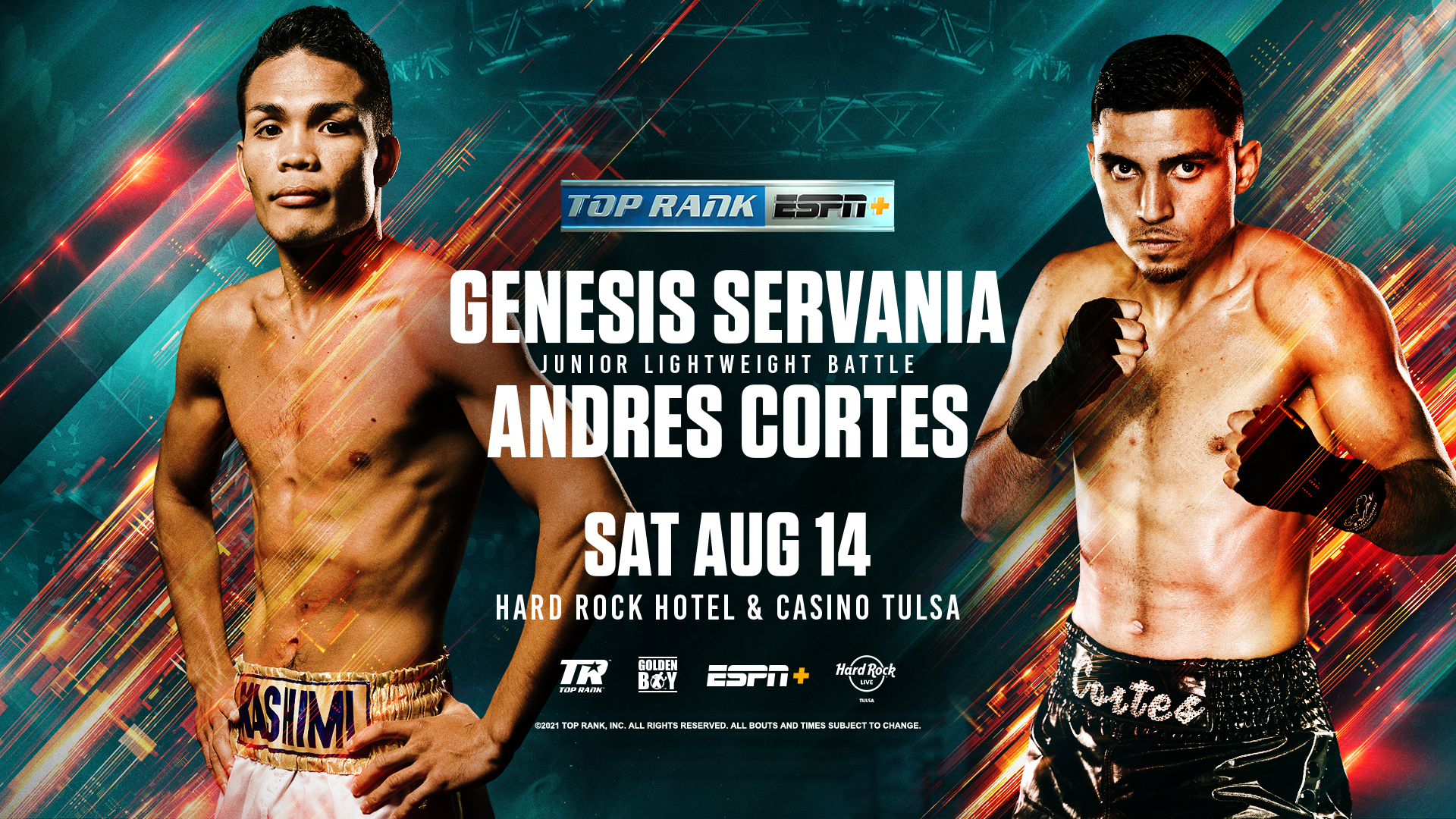 In other undercard action, Toledo’s unbeaten junior lightweight contender Albert Bell will fight Ecuadorian veteran Julio Cortez in an eight-rounder, while Abraham Nova returns from an injury to fight an opponent to be named in an eight-round featherweight tilt. The ESPN+ undercard stream starts at 6 p.m. ET/3 p.m. PT, preceding the tripleheader on ESPN and ESPN Deportes (simulcast on ESPN+) at 10 p.m. ET/7 p.m. PT.

Promoted by Top Rank, in association with Tony Holden Productions and Golden Boy Promotions, tickets starting at $49.50 are on sale now and can be purchased at tickets.hardrockcasinotulsa.com and the Box Office at 918-384-ROCK (7625).

Servania (34-2, 16 KOs) is 5-1 with four knockouts since falling short in a 2017 Fight of the Year contender to Oscar Valdez for the WBO featherweight world title. He moved up to junior lightweight following a February 2019 decision loss to top junior featherweight contender Carlos Castro. Cortes (14-0, 7 KOs) last fought May 22 on the Josh Taylor-Jose Ramirez undercard and notched a unanimous decision over Eduardo Garza.

Bell (18-0, 5 KOs), the WBO No. 8 junior lightweight contender, is 6-0 since signing with Top Rank in 2018. He authored his signature victory in June 2019 when he outboxed Andy Vences over 10 rounds. Bell fought in April in Tulsa and turned back the stiff challenge of Manuel Rey Rojas. Cortez (15-2, 11 KOs) is unbeaten as a junior lightweight and has won two straight bouts since a split decision defeat in February 2020.

Nova (19-0, 14 KOs) has been out of action since June 2020, when he figured out the tricky Avery Sparrow en route to a 10-round decision win. Ranked in the top 15 by two of the major sanctioning organizations, Nova will now set his sights on climbing the featherweight rankings. Born in Puerto Rico and raised in Albany, N.Y., Nova had knocked out four straight foes before the Sparrow fight.