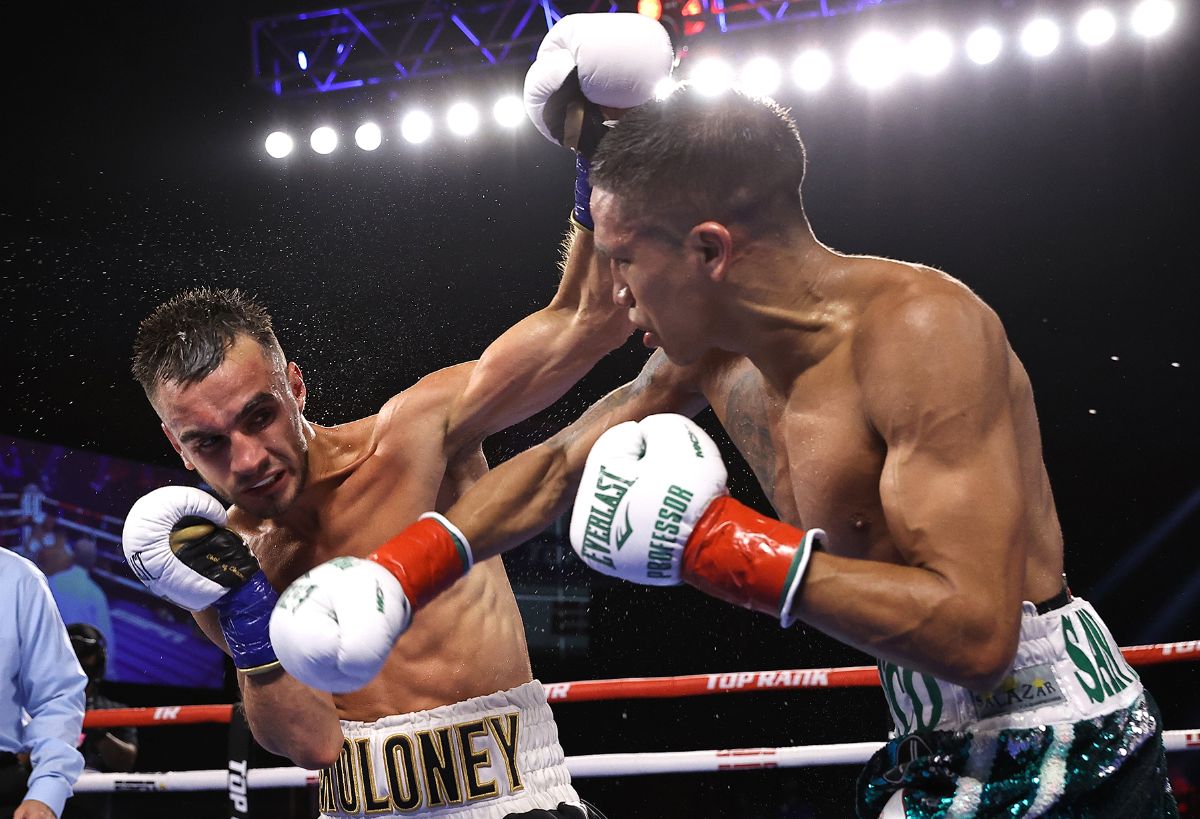 Moloney (21-2, 14 KOs) was unable to capture the magic of their rematch, where he outgunned Franco for two rounds before the fight was stopped due to what the referee deemed an accidental headbutt. The controversy — head clash or punch — raged for nine months, and Franco quickly established his supremacy this time around.

In the seventh round, Moloney appeared to knock down Franco with a right hand, but video replay determined their feet got tangled up and the knockdown was waved off. Franco neutralized Moloney’s trademark jab and dominated down the stretch to retain his title.

“I had fun with my rhythm, with my jab, my feet. I’m comfortable in there, and that’s what I did.

“We just told each other, all that talking is part of the game, part of building the fight up. He’ll be world champion again. He’s a strong fighter. Nothing but respect to him. I wish him the best in his career.”

Moloney said, “I’ll have to use this as motivation to come back stronger. It’s going to be a long road back.”

The Legend Lives On: Ali Walsh Shines in Pro Debut

Nico Ali Walsh’s grandfather was the greatest to ever do it. On a Saturday night in Tulsa, 40 years after Muhammad Ali’s last fight, Ali Walsh’s professional journey began. He made quick work of Jordan Weeks (4-2, 2 KOs), knocking him out in the opening round of a scheduled four-round middleweight contest. He knocked down Weeks with a right hand, and a follow-up flurry ended the night for the South Carolina native.

Ali Walsh said, “This lived up completely to my expectations. It’s been an emotional journey this whole ride these last couple of months.

“Obviously, my grandfather, I’m thinking about him so much. I miss him. It’s just an emotional journey, and thank you to Jordan Weeks and his people. Tough, tough kid. I think me and him made a little bit of history tonight.

“To hear those Ali chants was something that I’ll never forget. I didn’t expect that, to be honest, but it was special.”

Top junior welterweight contender Arnold Barboza Jr. (26-0, 10 KOs) kept the train moving, toppling Antonio Moran (26-5-1, 19 KOs) via one-sided unanimous decision (99-91 2x and 100-90) to retain his WBO International junior welterweight title. Barboza, ranked No. 3 by the WBO, battered Moran in the early rounds, but the Mexican veteran did not relent. Swollen and cut on his nose, Moran notched a moral victory.

Barboza said, “Moran is a true Mexican warrior. I thought I’d get the knockout, but he ate a lot of punches. My goal is to get that world title shot, but I am going to keep going until I make that a reality. I want any of the big names at 140 pounds.”

Junior Lightweight: Karlos Balderas (10-1, 9 KOs) TKO 2 Fidel Cervantes (9-2-1,4 KOs), 2:03. Balderas is back. The 2016 U.S. Olympian, making his first appearance since a December 2019 knockout loss, blasted Cervantes in his Top Rank debut. Balderas knocked down Cervantes in the opening round and nearly had him out, but Cervantes somehow survived and stumbled out for the second. The end was near, and with less than a minute remaining in the round, referee Gary Ritter halted the one-way traffic.

Balderas said, “I’m back and better than ever. Even with this victory, I have things to work on. I’m going straight back to the gym to get ready for the next one. Thanks to Top Rank for the opportunity and my manager, Sam Katkovski, for making this happen. I’m only getting started.”

Junior Lightweight: Andres Cortes (15-0, 8 KOs) KO 1 Genesis Servania (34-3, 16 KOs), 3:00. Las Vegas native Cortes notched an eye-opening victory over former featherweight world title challenger Servania, knocking him cold with left-right combination as the first round was coming to a close. Servania, who had never been knocked out as a pro, was slumped against the ropes and referee Jack Reiss stopped the fight before the 10-count was complete.

Bell said, “I knew he was a tough, aggressive fighter who was going to come forward all night. I’m happy with my performance, and I look forward to fighting my way to a title shot.”

Featherweight: Abraham Nova (20-0, 14 KOs) UD 8 Richard Pumicpic (22-12-2, 7 KOs). Scores: 78-74 and 79-73 2x. After more than a year out of ring due to injury, Nova outlasted the battle-tested Filipino, surviving an overhand right that wobbled him at the end of the opening round. After campaigning as a junior lightweight for most of his career, Nova now has his sights set on the featherweight elite.