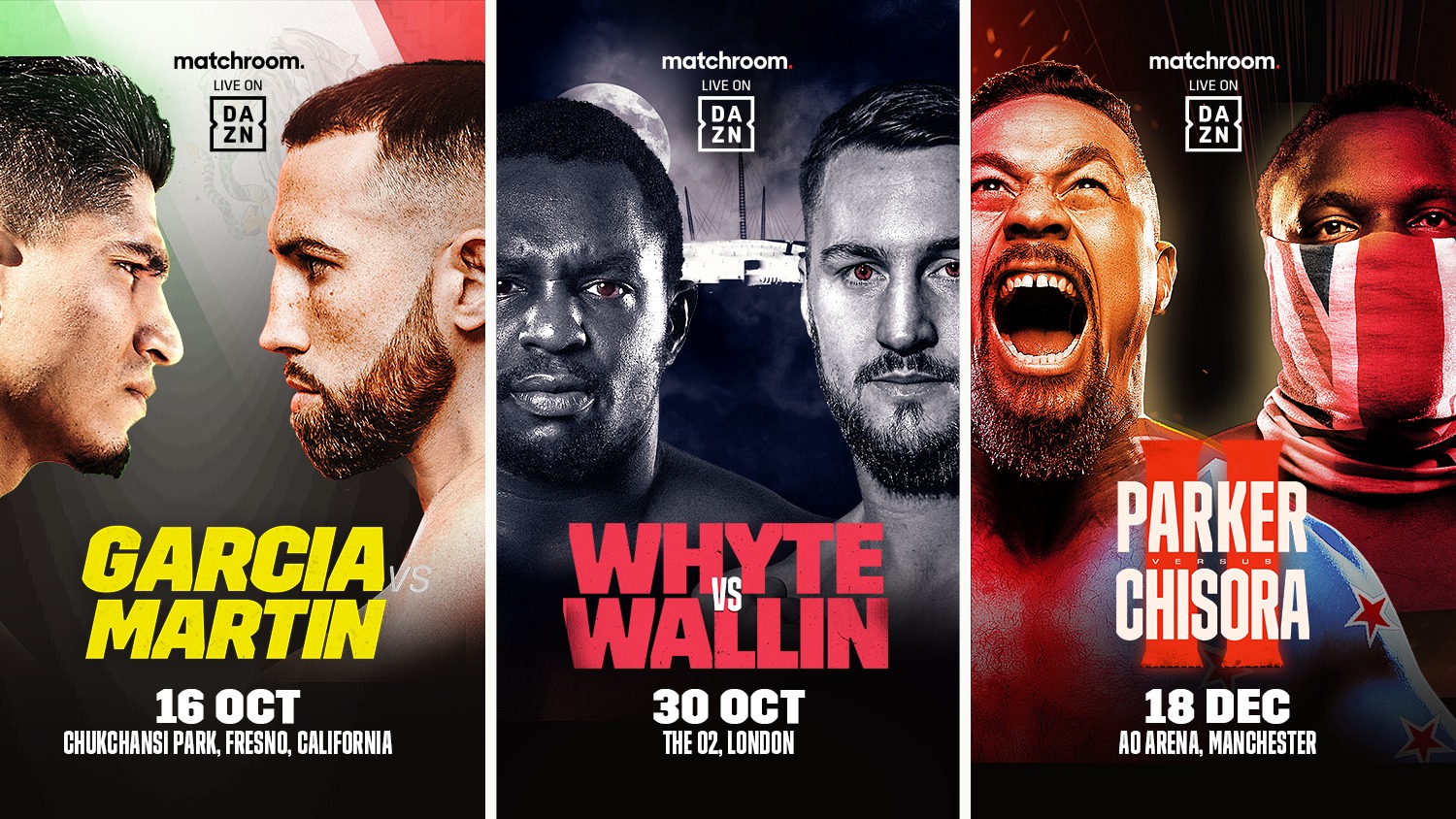 DAZN and Matchroom have announced three premium fights nights to add to an ever-increasing fall fight schedule, live and worldwide on DAZN:

First, four-weight king Mikey Garcia (40-1, 30 KOs) is back in action on Saturday October 16 at Chukchansi Park in Frenso, CA as he tackles European Super-Lightweight Champion Sandor Martin (38-2, 13 KOs). Garcia steps through the ropes for the first time since defeating Jessie Vargas in Frisco, TX in February 2020 and the California man welcomes Spaniard Martin to his home state, with Martin coming into the fight on the back of two successful defences of his European 140lbs strap. Garcia-Martin will be live worldwide on DAZN and tops a stacked card featuring World Title action and hot prospects to be announced shortly.

Two weeks later, ‘The Body Snatcher’ Dillian Whyte (28-2, 19 KOs) returns to the ring on Saturday, October 30, at The O2 in London, facing off against Swedish Heavyweight Otto Wallin (21-1-0-1, 14 KOs). The Brixton native avenged his previous defeat with a statement round 4 TKO against veteran Alexander Povetkin and reclaimed the WBC Interim Heavyweight Title. Wallin continues his good form coming into the fight, having beaten Dominic Breazeale and Travis Kauffman after a unanimous decision loss against two-time World Heavyweight Champion Tyson Fury. The event will be live worldwide on DAZN.

And, on Saturday, December 18, Joseph Parker (29-2, 21 KOs) faces off against the mercurial Brit Derek Chisora (32-11, 23 KOs) in a rematch of their 12-round war in May 2021. Parker, the former WBO Heavyweight Champion, has tallied five straight wins since losing against Dillian Whyte for the WBO International Heavyweight Title. Derek ‘WAR’ Chisora is looking to bounce back after losing by split decision against Parker and by unanimous decision against Oleksandr Usyk in October 2020. The event will be live worldwide on DAZN (with the exception of New Zealand and Samoa).

Ed Breeze, EVP Rights at DAZN, commented: “These three excellent fights are a testament to the great partnership that continues to flourish with Matchroom globally. Our schedule for the rest of the year is shaping up nicely and filled with World Champions, grizzled veterans, and exciting up-and-coming talent. We look forward to continuing to unveil more blockbuster fight nights as part of our ongoing commitment to deliver value to boxing fans worldwide.”

Matchroom Sport Chairman Eddie Hearn said: “Matchroom and DAZN’s stacked upcoming schedule just got even better with these three blockbuster additions. First up on October 16 four-weight king Mikey Garcia returns to action in a difficult assignment against Barcelona’s European Super-Lightweight Champion Sandor Martin in Fresno, CA. ‘The Body Snatcher’ Dillian Whyte returns home to The O2 on October 30 to put his Interim WBC Heavyweight World Title against Otto Wallin – the man that came so close to inflicting a loss on Tyson Fury. Then on December 18 Joseph Parker and Derek Chisora go to war again at Manchester Arena. Catch it all live and exclusively around the world on DAZN.”

Other major matchups this fall on DAZN include live boxing making its return to Italy on October 1 as local star Daniele Scardina continues his hunt for a World Title fight when he takes on Juergen Doberstein for the WBO Intercontinental Super-Middleweight Title in Milan. And, on October 9, the south of Liverpool takes on the north as Liam Smith faces off against fellow Liverpudlian Anthony Fowler in a hugely competitive domestic fight, live from the M&S Bank Arena, Liverpool.

DAZN is available for £7.99 / €7.99 per month. Existing UK & Ireland subscribers will be moved to £7.99 / €7.99 pm from September 30th. This not only covers dozens of fight nights annually (subject to availability), including premium events from Matchroom UK, USA, Italy, and Spain as well as Golden Boy, plus The DAZN Boxing Show – the only daily boxing show and go-to boxing news source available to fight fanatics worldwide, including on-the-ground and behind-the-scenes coverage throughout AJ vs. Usyk fight week. There’s also a growing line-up of original programming such as Ronaldo: El Presidente, La Guerra Civil, Canelo: The Greatest Athlete You’ve Never Seen, Club Ibiza, as well as a new original series to be announced shortly. Full details are available on DAZN News.