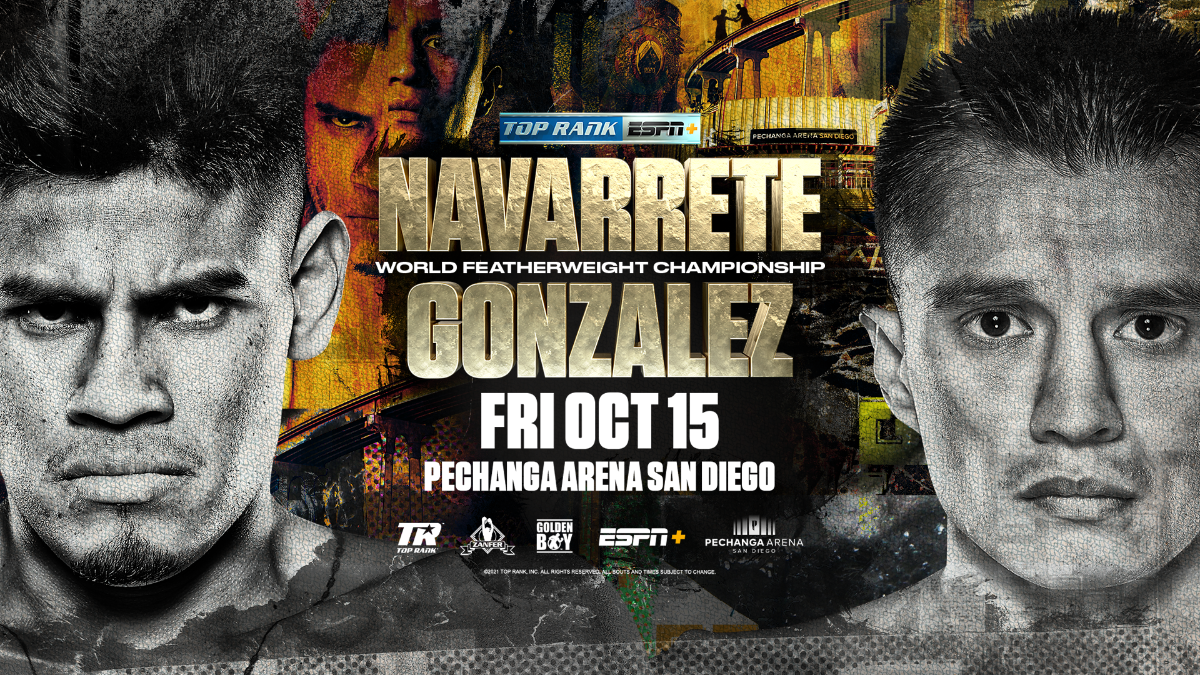 In the 10-round welterweight co-feature, San Diego native Giovani Santillan makes his first hometown appearance in more than seven years against Angel “Relampago” Ruiz, the southpaw windmill from Culiacán, Mexico.

Promoted by Top Rank, tickets starting at $55 go on sale Wednesday, Sept. 15 at 10 a.m. PT and can be purchased by visiting AXS.com.

“Emanuel Navarrete never disappoints, as he’s a true Mexican warrior who fights in a crowd-pleasing style,” said Top Rank chairman Bob Arum. “Joet Gonzalez earned his position as the mandatory challenger, and he has everything it takes to give Navarrete a formidable challenge. I am also thrilled that Giovani Santillan will get an opportunity to fight in front of the hometown fans in an excellent fight against Angel Ruiz.”

Navarrete (34-1, 29 KOs) is 8-0 with six knockouts in world title fights, a busy championship run that began in December 2018 with his dominant decision over Isaac Dogboe to win the WBO junior featherweight world title. Following five title defenses in nine months, Navarrete moved up to featherweight and bested Ruben Villa by unanimous decision last October to win the WBO world title. He defended that title in April and knocked out Christopher Diaz in the 12th round. Gonzalez (24-1, 14 KOs) fell short in his first world title opportunity in October 2019, losing a decision to pound-for-pound star Shakur Stevenson. He returned last September and handed a one-sided beating to three-time world title challenger Miguel Marriaga to earn his WBO No. 1 ranking.

“I am focused on winning this fight and defending my world title for the second time. I know that Joet Gonzalez is a good fighter. I respect him and he is also my mandatory challenger, but I am the champion, and I will show him why. This belt isn’t going anywhere,” Navarrete said. “I hope that my Mexican fans will support me in San Diego, and my fans from Tijuana can also come to the fight. I will give them a great fight, and it will be a great victory for all my Mexican people.”

Gonzalez said, “I am excited and thankful to receive a second world title opportunity, this time against a great Mexican warrior like Navarrete. I know I have what it takes to become a world champion, and I will show the world that on Oct. 15. No disrespect to Navarrete, but this is my time.”

Santillan (27-0, 15 KOs), born and raised in San Diego, first picked up a pair of gloves at 8 years old and fought nearly 80 amateur bouts before turning pro in 2012 in Temecula, California. Santillan rose the ranks fighting mostly in Southern California, but he’s made only one pro appearance in his hometown, a 2014 TKO over Osenohan Vazquez. In June 2020, he survived a razor-thin majority decision against former lightweight world champion Antonio DeMarco. After a year-long layoff, he returned June 26 with a one-sided decision over Cecil McCalla. Ruiz (17-1, 12 KOs), a six-year pro, won the first 16 fights of his career before suffering a shocking second-round knockout loss to Javier Flores in October 2019. He came back in April 2021 and bullied the previously unbeaten Bobirzhan Mominov en route to an eight-round decision on a nationally televised card.

“As soon as I got the call, I was excited because this is something my dad and I talked about for a long time, being part of a big show in San Diego,” Santillan said. “Ruiz is a good fighter, a hungry guy, but I’m hungry as well. We actually sparred a few years back and did some rounds. It was good work. I can’t wait for Oct. 15. I’m going to perform for my family, my friends, and my city. This is an incredible opportunity.”

Lebron (13-0, 9 KOs), a southpaw who won Puerto Rican amateur national titles in 2015 and 2016 before turning pro, is coming off last August’s near-shutout decision over veteran Luis Porozo. One of his island nation’s most promising prospects, the 23-year-old has six knockouts in two rounds or less. Rojas (21-5, 6 KOs) has only been knocked out once as a pro and most recently won a one-sided decision over Tyler McCreary in June on a Top Rank card.