Berlanga-Coceres and Williams-Hernandez will be televised live at 7 p.m. ET/4 p.m. PT on ESPN2, ESPN Deportes, FS1 and FOX Deportes (simulcast on ESPN+) 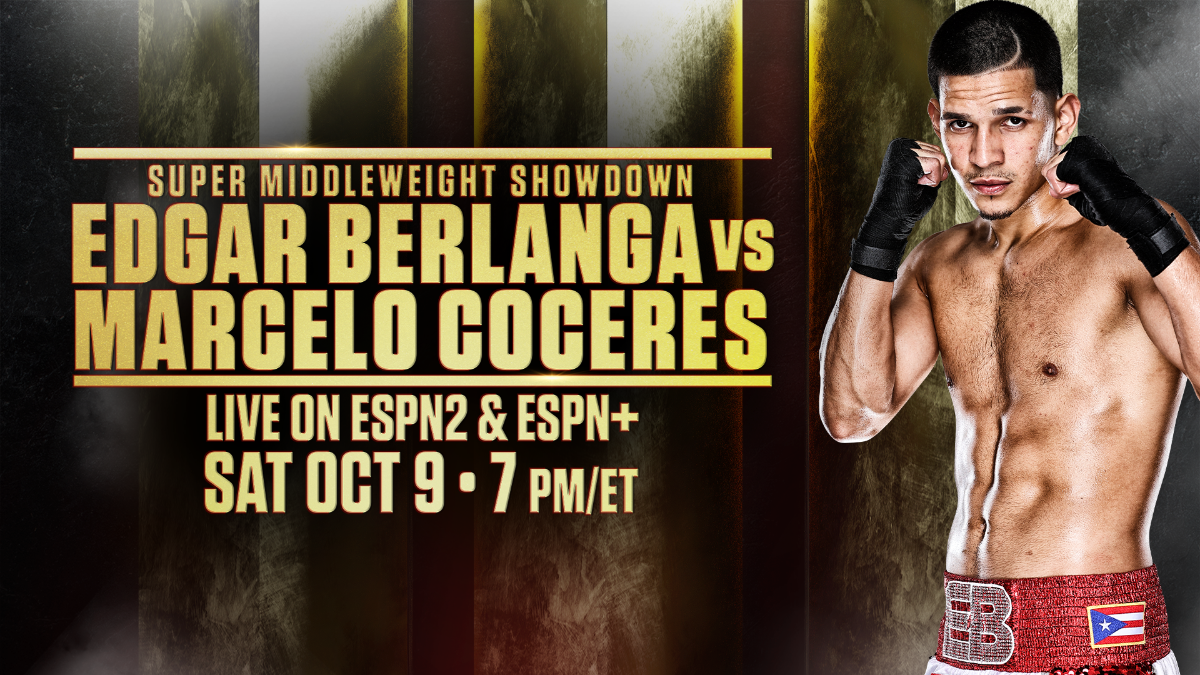 Edgar “The Chosen One” Berlanga will fight former world title challenger Marcelo Esteban “El Terrible” Coceres in a scheduled 10-round showdown for the vacant NABO super middleweight belt, while Julian “J-Rock” Williams will face Mexico’s Vladimir Hernandez in a 10-round junior middleweight bout in his first fight since losing his title belts.

Berlanga-Coceres and Williams-Hernandez will be televised live at 7 p.m. ET/4 p.m. PT on ESPN2, ESPN Deportes, FS1 and FOX Deportes, and simulcast on ESPN+. Preliminary bouts will stream live on the ESPN App and FOX Sports App starting at 4:30 p.m. ET/1:30 p.m. PT.

The all-heavyweight Fury vs. Wilder III ESPN+ and FOX Sports PPV bonanza begins at 9 p.m. ET/6 p.m. PT and features 2016 Nigerian Olympian “The One and Only” Efe Ajagba squaring off against fellow unbeaten Frank “The Cuban Flash” Sanchez in the 10-round co-main event; the highly anticipated 12-round rematch between Robert “The Nordic Nightmare” Helenius and Adam “Babyface” Kownacki; and the eight-round PPV opener featuring 21-year-old sensation Jared “The Real Big Baby” Anderson versus Russian veteran Vladimir Tereshkin.

Tickets for Fury vs. Wilder III are on sale now and can be purchased at www.t-mobilearena.com or www.axs.com. The event is promoted by Top Rank, BombZquad Promotions, TGB Promotions and Frank Warren’s Queensberry Promotions. A Premier Boxing Champions presentation.

Berlanga (17-0, 16 KOs), the Brooklyn-bred puncher with Puerto Rican roots, became one of boxing’s most talked-about fighters by scoring first-round knockouts in his first 16 fights. The 2020 Prospect of the Year, he’s walked to the ring with mentor and multi-platinum hip hop artist Fat Joe and become a social media sensation with his highlight-reel stoppages. The knockout streak ended in April, as Berlanga knocked down Demond Nicholson four times in eight rounds and had to settle for a unanimous decision. Coceres (30-2-1, 16 KOs), from Argentina, challenged Billy Joe Saunders for the WBO super middleweight world title in November 2019 and was nearly level on the scorecards before being knocked out in the 11th round. He last fought in June, knocking out Nelson Nicolas Rosalez in the second round.

Berlanga said, “I am thrilled to be fighting on the Fury-Wilder III card, and I am coming do what I always do, which is to steal the show and knock out my opponent in devastating fashion. Coceres is in for a rude awakening on October 9. Do not get up for a snack when I’m fighting. It’s going to be a short, brutal night. Count on it.”

“Berlanga can say what he wants about making it a short night or whatever. The biggest talkers are usually the most insecure,” said Coceres. “I know what I bring to the table. I’ve been in there with the better fighters, while he’s feasted on a diet of nobodies. In my mind, it won’t be an upset when I beat this kid. On October 9, it is man versus boy, and that boy is in for a rude awakening.”

Philadelphia’s Williams (27-2-1, 16 KOs) became a unified world champion at 154-pounds in May 2019 when he upset Jarrett Hurd in one of the year’s best fights, winning a close-quarters brawl by unanimous decision. The 31-year-old dropped the titles in his first defense, losing to Jeison Rosario in January 2020. Williams had been riding a five-fight winning streak going into the Rosario matchup, in which he added victories over former champion Ishe Smith and hard-hitting contender Nathaniel Gallimore to his ledger. He returns to action on Oct. 9 against the 32-year-old Hernandez (12-4, 6 KOs). Originally from Durango, Mexico, Hernandez now lives in Denver, Colorado, and most recently earned a decision victory over longtime contender Alfredo Angulo in August 2020.

“I’m thankful for the opportunity to compete on this amazing card,” said Williams. “I’m excited to be getting back in the ring and starting my journey back to the very top of the division.”

“I’m very thankful for this opportunity to get back in the ring on October 9,” said Hernandez. “I expect Julian Williams to be prepared like I am to give the fans a great fight. I have been doing nothing but staying ready and training since my last fight. I promise that I’m going to bring the action when that bell rings.”