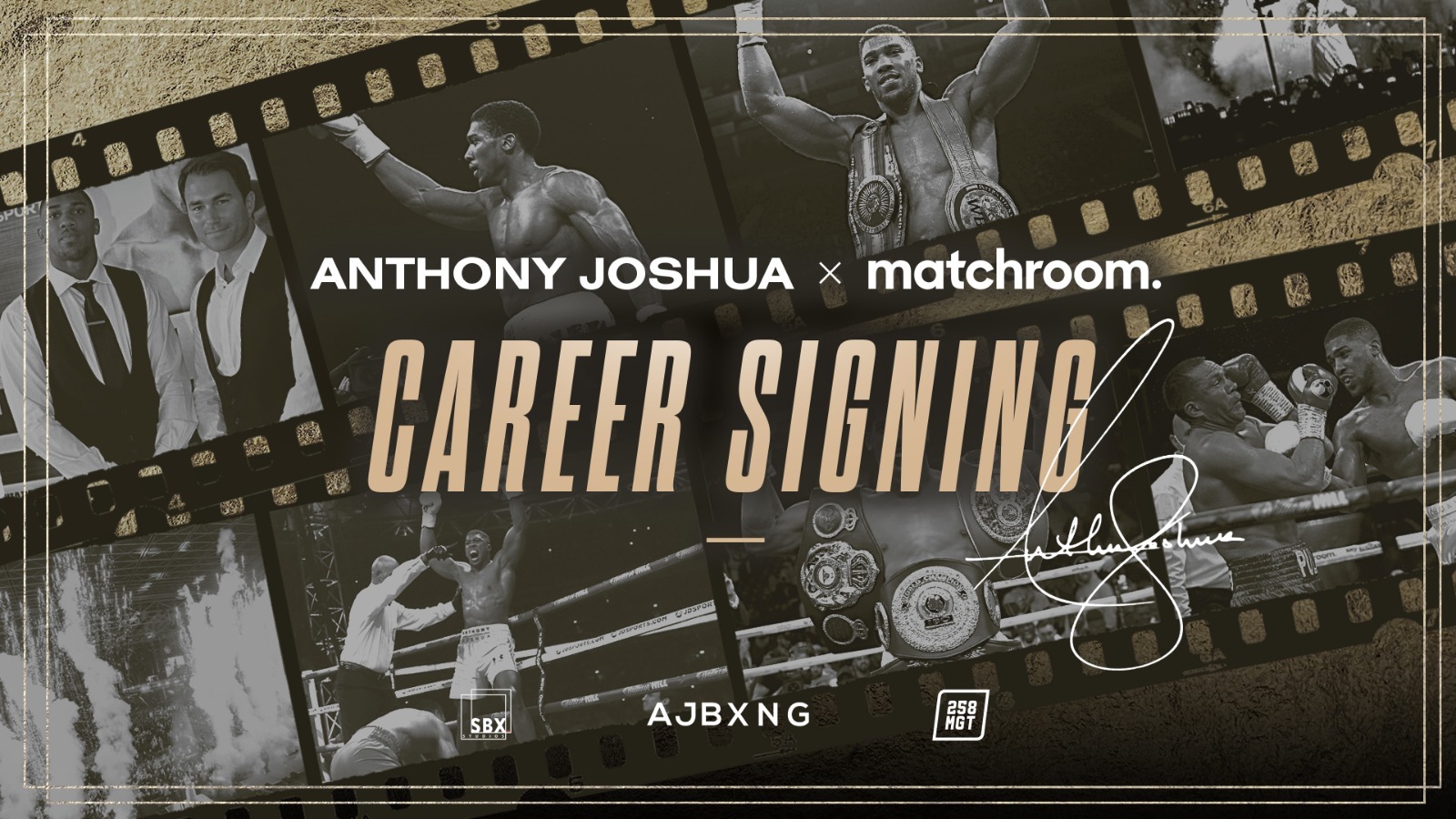 The IBF, WBA, WBO and IBO ruler puts his crowns on the line against former Undisputed Cruiserweight king Oleksandr Usyk at Tottenham Hotspur Stadium in London this Saturday September 25.

‘AJ’ turned professional with Matchroom Boxing in October 2013 after memorably capturing gold at the London 2012 Olympic Games in the Super-Heavyweight category and becoming an instant star in the UK.

Quickly establishing himself as one of the most devastating punchers in the Heavyweight division with a series of brutal KO’s, Joshua picked up the vacant Commonwealth crown with another huge stoppage win over Gary Cornish in Greenwich.

The O2 became a home fortress for Joshua and his next assignment came against old amateur foe Dillian Whyte in December 2015. The pair were involved in a heated build-up before AJ made it 15 KOs in a row against ‘The Body Snatcher’, claiming the prestigious British Title in the process.

Joshua climbed the ranks until he was in a position to fight for his first World Title in April 2016 against IBF titleholder Charles Martin, who he quickly destroyed inside five minutes before making short work of American opponents Dominic Breazeale and Eric Molina in his first two title defences.

Joshua’s breakthrough victory came when he produced the performance of a lifetime to claim the WBA Title against modern legend Wladimir Klitschko in an unforgettable battle in front of a post war record crowd of 90,000 at Wembley Stadium in April 2017.

He went on to sell-out the Principality Stadium in Cardiff, Wales twice, defending his belts against the tough Cameroonian Carlos Takam in October 2017 before unifying the division by taking Joseph Parker’s WBO belt in March 2018.

Joshua defended his World Titles with a devastating knockout of dangerous Russian Alexander Povetkin at Wembley Stadium in September 2018 in what was the Olympic Champion’s fourth straight stadium fight in front of over 80,000 fans.

In his quest for global domination, the British sensation signed to defend his World Titles against Brooklyn’s Jarrell ‘Big Baby’ Miller at the famous Madison Square Garden in New York on June 1 2019, but the Brooklyn native failed a series of drug tests leaving Joshua’s team searching for a replacement opponent for his big American debut.

Joshua’s quest to become the Undisputed Heavyweight king was temporarily halted in its tracks as late stand in opponent Andy Ruiz Jr floored him four times on route to a monumental seventh round stoppage win that shocked the world.

After tasting defeat for the first time in his professional career, Joshua jumped into an immediate rematch with Ruiz Jr on neutral ground to reclaim his position at the number one Heavyweight on the planet.

Ruiz and Joshua met again in a colossal ‘Clash on the Dunes’ in the historical town of Diriyah in Saudi Arabia, with the Watford man putting on a brilliant display of boxing to widely outpoint the Mexican to become a two-time Heavyweight World Champion.

Joshua returned home to take on his IBF Mandatory challenger Kubrat Pulev at The SSE Arena, Wembley a year later in December 2020 after their June meeting at the home of Tottenham Hotspur was cancelled due to the COVID-19 pandemic.

In the first fight attended by a British crowd since the global pandemic began, Joshua dominated and then floored Pulev to score a brutal ninth-round knockout. The Bulgarian was down on three occasions, twice in the final round, before ‘AJ’ ended the fight with a vicious right hand.

“We’ve built some great foundations over the years and I appreciate Matchroom – the company, the team, the family business,” said Joshua. “That’s kind of what drew me towards you guys as well, the integrity that the Hearns have when it comes to boxing and business.

“I’ve felt comfortable during my years as a boxer and I always felt that the business outside of sport is harder than the actual fighting due to the history and some of the problems that some fighters have had. So, to be with Matchroom Sport has been a blessing for myself, my family and my team.

“Outside of that, what Matchroom Sport have done is created an environment for boxing fans. The shows that we have managed to put on have been phenomenal. When I walk out to fight, I look around and I’m like, ‘mate, this is unbelievable’.

“From where we began, to the middle of the journey, the foundations we have created are phenomenal and I can’t wait to see what the future holds. In my humble opinion, what better place to be than Matchroom Boxing? I have heard that my signature was hot property. I’m happy where I am. A handshake is good enough for me, but the signature solidifies it and I’m happy where my signature is.

“Thank you to Eddie Hearn, Barry Hearn and the family, Frank Smith and all of the Matchroom staff, as well as Freddie Cunningham and the team at 258MGT.”

“When AJ and I met in the Matchroom HQ 8 years ago, we had a vision and a dream that we shared together,” said Matchroom Sport Chairman Eddie Hearn. “There is something quite special about sharing a journey together from the professional debut to the day the gloves are hung up, but it takes a huge amount of belief and an unwavering loyalty. Over those 8 years, AJ has been the face of British boxing, inspiring a new generation and audience to the sport we love.

“This is the fourth and final promotional agreement we have signed together, and I am honoured that AJ has confirmed his future with Matchroom. Just like we did from the debut, myself and the great team at Matchroom will continue to work relentlessly for Anthony in the many chapters that remain. I also want to thank Frank Smith and the whole team at Matchroom along with Freddie Cunningham and 258 who we have had a seamless partnership with. Here is to an amazing night this Saturday and many more for us all to savour.”

“The partnership between Matchroom, Anthony and 258MGT has been fantastic since day one,” said 258MGT Managing Director Freddie Cunningham. “Together we have all worked hand in hand to break records and sell out iconic venues all over the world. Matchroom have been a key component in helping give Anthony the platform to hit the pinnacle of his sport and we are excited to embark on the next part of the journey and make more history together. The deal has been a while in the making so we are really pleased to have it signed and sealed before another huge fight on Saturday night.”