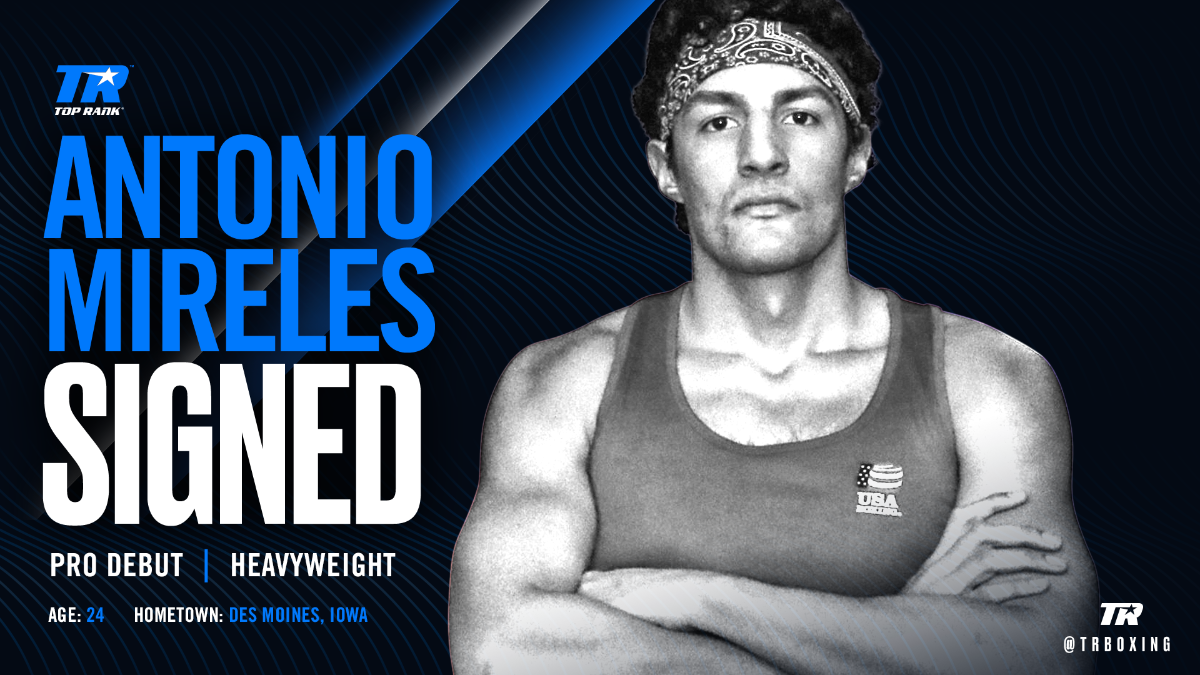 LAS VEGAS (Sept. 22, 2021) — Antonio “El Gigante” Mireles is about to take a giant step in his boxing career. The 6-foot-9, 265-pound heavyweight from Des Moines, Iowa, has signed a multi-year promotional contract with Top Rank and will make his professional debut in a four-rounder live on ESPN+ Friday, Oct. 15 on the Emanuel Navarrete-Joet Gonzalez undercard at Pechanga Arena San Diego.

Mireles enters the paid ranks with an all-star team in his corner. He’s training with Robert Garcia in Riverside, California, and is managed by David McWater, the 2020 Manager of the Year.

“Antonio is a big young man with a personality to match, and he has all the makings of a heavyweight superstar,” said Top Rank chairman Bob Arum. “With Robert Garcia guiding him inside the ropes, I have no doubt he’ll develop into a formidable fighter.”

Mireles said, “I want to thank Top Rank for this tremendous opportunity. I’ve had my eye on Top Rank ever since I started taking the sport seriously, and it’s an honor to turn pro under their banner. I am a versatile boxer, but I’m not afraid to get in the trenches and have a shootout. My coaches try to stop me from doing that, but I’m aggressive by nature. I believe my style is more suited to the pro game, and I’m counting down the days until I step in that ring.”

Mireles, who started boxing at the age of 12, had a brief but successful amateur career. He went 28-4 with 10 knockouts, winning the 2020 USA Olympic Trials and a National Golden Gloves title in 2019. Despite winning the trials, Mireles was selected as an alternate for the 2020 Olympic boxing qualifiers. As a result, he set his sights on the pro game.

“The more I thought about it, I realized I had no desire to fight as an amateur anymore,” Mireles said. “I wanted to take the next step and continue to grow as a fighter.”