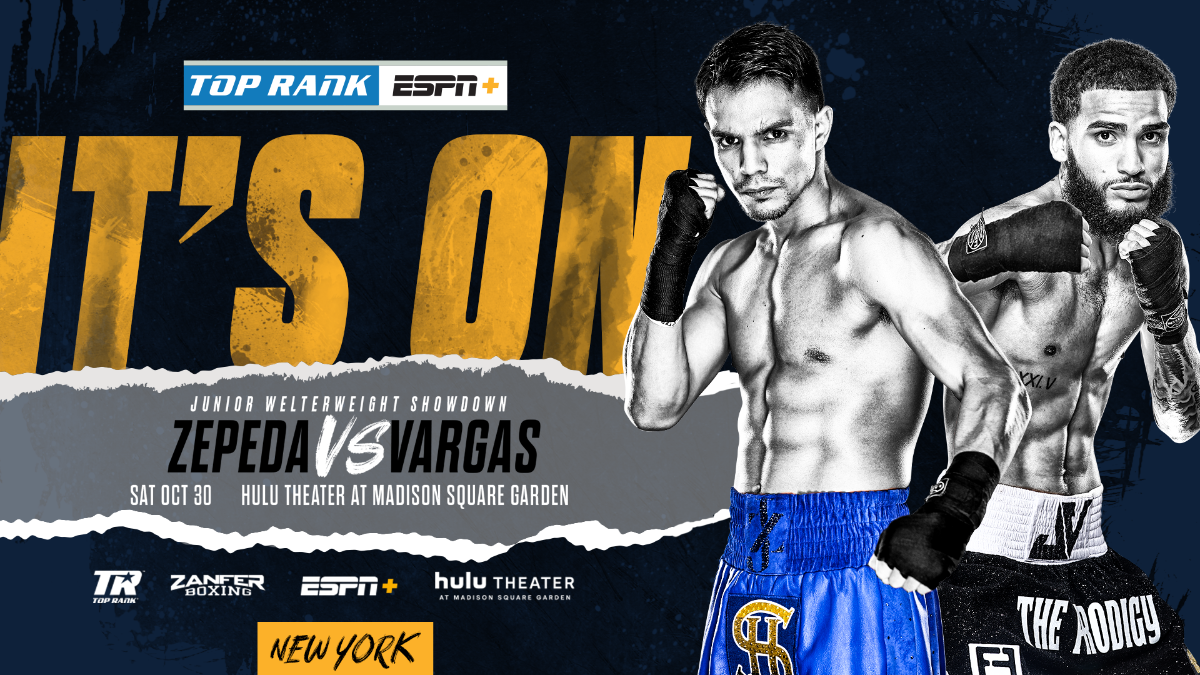 Zepeda and Vargas will meet in a 10-round junior welterweight main event Saturday, Oct. 30 at Hulu Theater at Madison Square Garden. Zepeda is ranked No. 2 in the world by the WBC, and Vargas, winner of 13 straight bouts, hopes to knock “Chon” off his lofty perch.

Promoted by Top Rank, tickets starting at $30 (not including fees) go on sale Friday, Oct. 1 at 12 p.m. ET and can be purchased by visiting Ticketmaster.com or MSG.com. All guests age 12 and older are required to provide proof of COVID-19 vaccination (this means having at least one dose of a COVID-19 vaccine prior to attending). MSG’s comprehensive COVID-19 guidelines, including those regarding children under 12, can be found at https://www.msg.com/madison-square-garden/faqs.

“It’s been a long time, and Top Rank and ESPN are thrilled to be back at Madison Square Garden with an intriguing battle between a sensational young southpaw in Vargas and a world-level contender in Zepeda. The winner is squarely in the title picture,” said Top Rank chairman Bob Arum. “Carlos Caraballo has all the makings of the next Puerto Rican superstar. Not many bantamweights can punch like this kid, but Sultan is far from a pushover.”

Zepeda (34-2, 21 KOs) is unbeaten in five bouts since a tight majority decision loss to then-WBC world champion Jose Ramirez in February 2019. The slick-boxing Zepeda participated in the 2020 Fight of the Year, knocking out Ivan Baranchyk in the fifth round of a bout that featured eight total knockdowns. He returned in May on the Josh Taylor-Ramirez undercard and outboxed “Hammerin” Hank Lundy over 10 rounds. Zepeda hopes a win over Vargas leads to a Ramirez rematch or perhaps a crack at undisputed king Taylor. Vargas (19-1, 9 KOs) earned his nickname as a wunderkind in the Bronx, where he compiled a 72-8 amateur record and won six New York City Metro championships. Apart from a controversial disqualification loss early in his pro career, Vargas has been near-perfect. He fought twice in 2020 inside the MGM Grand Bubble, notching wide points wins over Salvador Briceno and Kendo Castaneda. He last fought April 24 in Kissimmee, Florida, and turned back the awkward challenge of Willie Shaw over 10 rounds.

“I am pushing hard to earn another world title opportunity, but I understand the task at hand against a young, talented fighter like Josue Vargas,” Zepeda said. “There is mutual respect, but when we enter the Madison Square Garden ring, that all goes out the window.”

Vargas said, “I’m ready for this opportunity. Being the main event in my hometown, Madison Square Garden, is a dream true. The Bronx and Puerto Rico will be in the building to show their support. This is Puerto Rico versus Mexico, so you know it’s going to be a heck of a fight. Once I got the call, I started pushing even harder. I‘ve been through a lot in my professional career, so why not step up to the plate? I have the skills to beat Zepeda, and I’m going to do just that. Zepeda has a lot of experience against the top names in the junior welterweight division. We both have the talent and the skills to put on a show.”

Caraballo (14-0, 14 KOs), from Guayanilla, Puerto Rico, is a five-year pro who broke out in March with his fourth-round demolition over Leonardo Baez. He hopes to enter the world title picture with an impressive showing over Sultan (17-5, 11 KOs), a former world title challenger from the Philippines who has never been stopped as a professional. In May 2018, Sultan dropped a decision to Jerwin Ancajas for the IBF junior bantamweight world title. He has won three out of his past four fights and last fought in August, knocking out Sharone Carter in seven rounds.

Caraballo said, “I am thankful for the opportunity that my promoter, Miguel Cotto Promotions, is giving me together with Top Rank to fight at Madison Square Garden. I will take this opportunity to look great and continue to make noise at 118 pounds as I aspire to win a world title. Sultan is a strong, experienced opponent. I know he has fought the big names, but I am working hard with my team to show I am a force to be reckoned with. This victory is for my people from Guayanilla, and all Puerto Ricans in New York.”