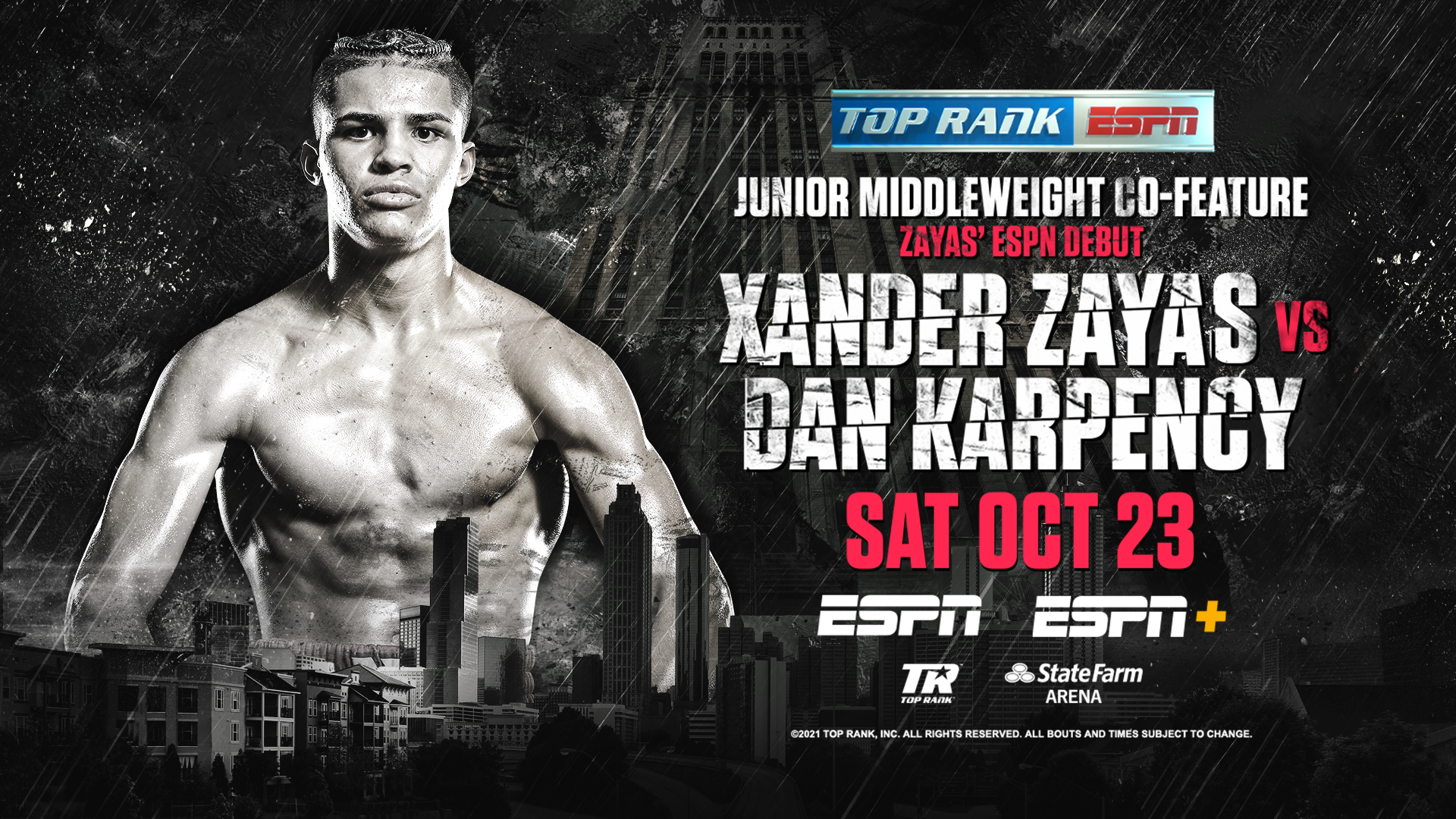 Xander Zayas (10-0, 7 KOs), the 19-year-old Puerto Rican-born prodigy who is the frontrunner for 2021 Prospect of the Year, will fight Dan Karpency in a six-round junior middleweight bout Saturday, Oct. 23 at State Farm Arena. Zayas-Karpency will serve as the co-feature to the “Throwdown in A-Town” main event between WBO junior lightweight world champion Jamel Herring and undefeated former featherweight world champion Shakur Stevenson.

Nico Ali Walsh (1-0, 1 KO), grandson of “The Greatest,” Muhammad Ali, has an opponent for his second pro bout. Ali Walsh will face James Westley II (1-0), from Toledo, Ohio, in a four-round middleweight tilt.

Tickets are on sale now and can be purchased at ticketmaster.com.

Zayas said, “I am grateful to Top Rank and ESPN for this opportunity. Fighting underneath a main event like Herring-Stevenson, in front of the great Atlanta fans, is an honor. It will also be my first time fighting on ESPN as a co-feature, and I will not disappoint. My goal is to win Prospect of the Year, and I’m coming to Atlanta to put on a spectacular show. Don’t miss it.”

Zayas has been earmarked for stardom since signing with Top Rank as a 16-year-old in early 2019. He turned pro at 17 in October 2019 and notched four first-round stoppages in his first six outings. Zayas has been clocking overtime in 2021, as this will be his fifth appearance of the year. He shut out James Martin over six rounds in February, blew out Demarcus Layton in 56 seconds in April, grinded down Larry Fryers in three rounds in June, and dominated Jose Luis Sanchez over six rounds last month in Tucson, Arizona. Karpency (9-3-1, 4 KOs) has never been knocked out in an eight-year pro career. Zayas has only been the six-round distance twice as a pro, while Karpency has gone eight or more rounds on four occasions.

About State Farm Arena
Home to the NBA’s Atlanta Hawks Basketball Club, the award-winning State Farm Arena opened its doors in October 2018 following the 2nd largest renovation in NBA history. Inspired by the fans, State Farm Arena is a next-generation venue focused on experience, service and entertainment. With the NBA’s third-largest center-hung scoreboard and an immersive video experience, fan-friendly food pricing and premium restaurant options, Topgolf Swing Suites and celebrity-inspired spaces accessible to every fan, the downtown Atlanta arena stakes its claim as the city’s best sports and live entertainment venue. Named Pollstar’s 2020 Best New Concert Venue, State Farm Arena consistently ranks among the top 10 concert and event venues in the world by and hosts nearly 200 events and nearly 2 million guests annually. For more information on State Farm Arena, log on to www.statefarmarena.com today or follow us on Twitter @StateFarmArena.