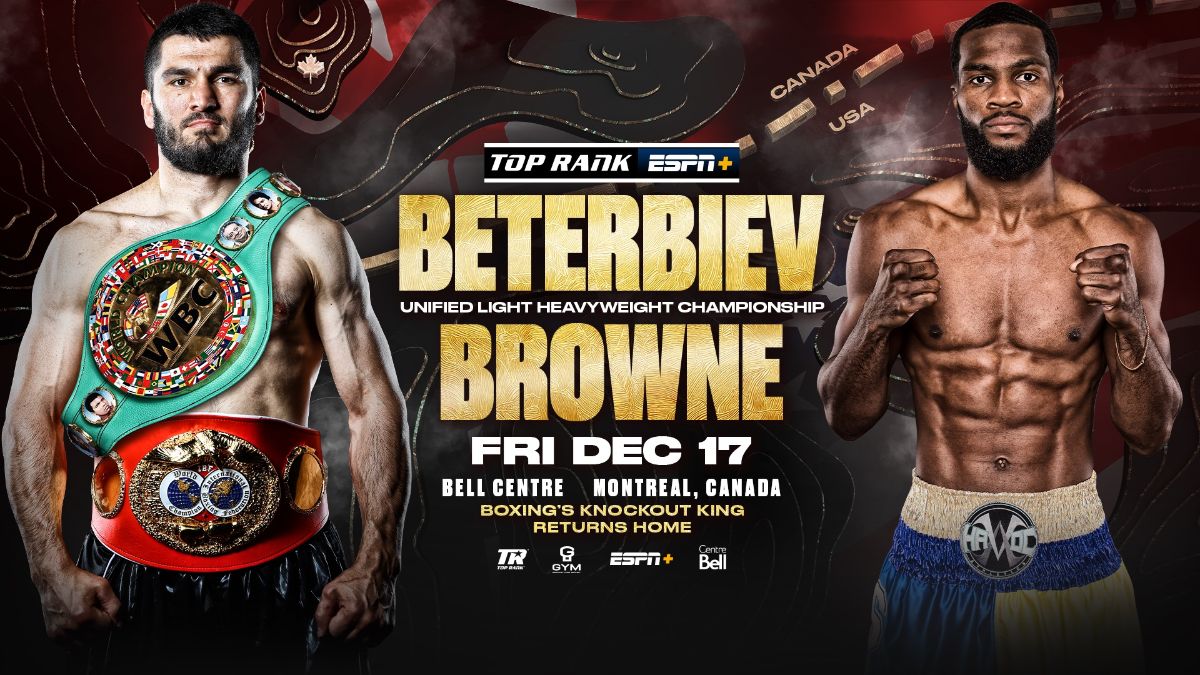 MONTREAL (Oct. 12, 2021) — WBC/IBF unified light heavyweight world champion Artur Beterbiev moved to Montreal nearly a decade ago to embark on his professional journey following a pair of Olympic berths for his native Russia. Sixteen fights into his career, he will return to his adopted hometown for the first time as a world champion.

Beterbiev, boxing’s only world champion with a 100 percent knockout rate, will defend his world titles against WBC No. 1 contender and 2012 U.S. Olympian Marcus Browne on Friday Dec. 17 at the Bell Centre in Montreal.

Beterbiev-Browne will headline a loaded world title tripleheader streaming live and exclusively in the United States on ESPN+. Undefeated light flyweight contender Kim Clavel will challenge for the WBC title, while former IBF junior middleweight world champion Marie-Eve Dicaire will attempt to regain her crown. Full details regarding the Clavel and Dicaire fights will be announced shortly.

Promoted by Top Rank and Groupe Yvon Michel (GYM), tickets go on sale Saturday, Oct. 23 at 10 a.m. ET and can be purchased by visiting ticketmaster.ca, or emailing GYM’s office directly at info@groupeyvonmichel.ca.

“Artur Beterbiev has built a tremendous fanbase in Montreal, and we wanted to give him the opportunity to defend his titles in his adopted hometown,” said Top Rank chairman Bob Arum. “Marcus Browne is a worthy mandatory challenger, a big southpaw with a high boxing IQ. But I believe Artur is the world’s premier light heavyweight and, as usual, will end the fight before the final bell.”

“I want to thank Bob Arum and Yvon Michel for bringing this event to Montreal. It’s been a dream of mine to defend my titles in front of the fans who have supported me my entire pro career,” Beterbiev said. “I look forward to defending my titles in dominant fashion.”

“This is the moment in my life that I’ve been waiting for and I’m ready to take advantage of it,” Browne said. “I know exactly what I have to do to take the titles from Beterbiev and that’s what I’m going to do.

“Beterbiev is the most avoided champion out there. He’s a great fighter, doesn’t make a lot of mistakes and is super strong. But I’m the better fighter and I’m here to show that come December 17. So, to my fans, know that I’m back and I’m here to stay. No controversial losses, no distractions, just straight work.”

“It is with great pride that we are going to offer this wonderful Christmas gift to Quebecers! Artur Beterbiev is probably the best boxer in the history of Canadian boxing, and it is a privilege to have him with us in this defense of his two world titles,” said Yvon Michel, GYM President. “In addition, we are going to make this event a historical one, as we have three world championship fights on the bill. Marie-Eve ​​Dicaire is determined to regain her title, and the charismatic Kim Clavel sets out to win the WBC light flyweight crown. December 17 is one of the biggest international boxing events ever presented in Canada, a real bright spot after all these months of the pandemic. I would like to thank Artur Beterbiev, Bob Arum and Top Rank for their trust.”

Beterbiev (16-0, 16 KOs) last fought in Canada in December 2016, a first-round stoppage over Isidro Ranoni Prieto. He won the vacant IBF world title in his next fight, which he defended two times before unifying titles with a devastating 10th-round stoppage over longtime WBC king Oleksandr Gvozdyk. After a nearly 18-month absence, Beterbiev returned in March with a 10th-round TKO over Adam Deines in Moscow. Browne (24-1, 16 KOs), a 30-year-old native of Staten Island, New York, won an interim world title in January 2019 with a unanimous decision win over two-weight world champion Badou Jack. After dropping a technical decision to Jean Pascal in August 2019, Browne returned to his winning ways April 20 with a shutout decision over Denis Grachev.