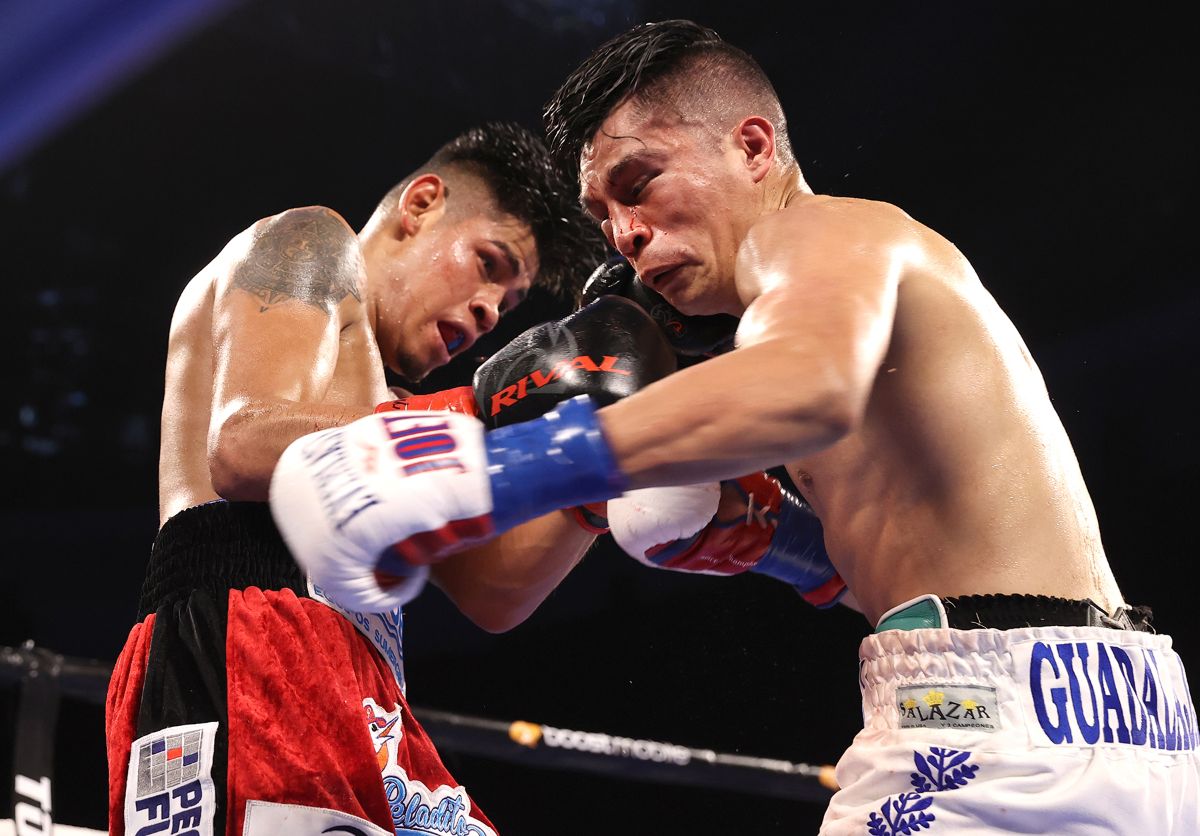 Navarrete (35-1, 29 KOs) retained his WBO featherweight world title with a bloody unanimous decision (118-110 and 116-112 2x) over Joet Gonzalez (24-2, 14 KOs) on Friday evening at Pechanga Arena San Diego. It was the second successful title defense for Navarrete, who moved up to the featherweight ranks last year after defending his junior featherweight crown five times.

“Without a doubt, I hurt him, but every single time he came back, and he also hurt me. A couple shots he landed hurt me during the fight,” Navarrete said. “It has been an exciting ride so far, and from now on, I want the bigger fights.”

The bigger fights could include an eventual move up to 130 pounds, where a match with WBC champion Oscar Valdez would be one of the biggest all-Mexican showdowns in the sport.

But on this night, Navarrete had to contend with the stubborn Gonzalez, who hung in tough despite swollen right eye in the early rounds. Navarrete threw 979 punches, including 104 in the 12th round to close the show in style.

Gonzalez said, “I thought I had it seven rounds to five, eight rounds to four. I was really surprised by that score of 118-110, I believe. But it is what it is, and I did my best.”

Welterweight contender Giovani Santillan had not fought in his hometown in more than seven years. In front of a partisan crowd that broke out into frequent “Gio” chants, the San Diego native improved to 28-0 with a 10-round unanimous decision over Angel Ruiz (17-2, 12 KOs). The scores — 100-90 2x and 99-91 — did not reflect the game effort of Ruiz, who gave nearly as good as he received for much of the fight.

Buoyed by the local faithful, Santillan prevailed in the phone both affair and edged closer to a title shot.

Santillan said, “This is what it’s all about, a great fight in front of my amazing hometown fans. They were cheering for me all night, and it was an honor to perform for my people in San Diego.

“My father and I always wanted to fight here. It was a dream come true, and credit to Angel Ruiz for going to battle for 10 rounds. He’s a true Mexican warrior. I have nothing but respect for him.”

Middleweight upstart Javier “Milwaukee Made” Martinez (5-0, 2 KOs) did not give any of that famous Midwest hospitality to Daryl Jones (4-3-1, 2 KOs), as he bested the Florida resident over six one-sided rounds by scores of 60-54 and 60-53 2x. After a second round that saw Jones nearly stopped against the ropes, the two battled the rest of the way, trading punches in the waning seconds of the sixth round.

Bantamweight prospect Floyd “Cashflow” Diaz (3-0) dominated former amateur rival Jose Ramirez (1-1, 1 KO) via four-round unanimous decision, knocking Ramirez down in the opening round and cruising to a points win by scores of 39-36 and 40-35 2x.

The newest heavyweight on the block showed out. Antonio “El Gigante” Mireles, from Des Moines, Iowa, shined in his professional debut, knocking out Demonte Randle (2-2, 2 KOs) in the opening round. Mireles, a southpaw, knocked down Randle early in the first round with a right hook. Following two more knockdowns, the referee called a halt to the fight at 2:07.