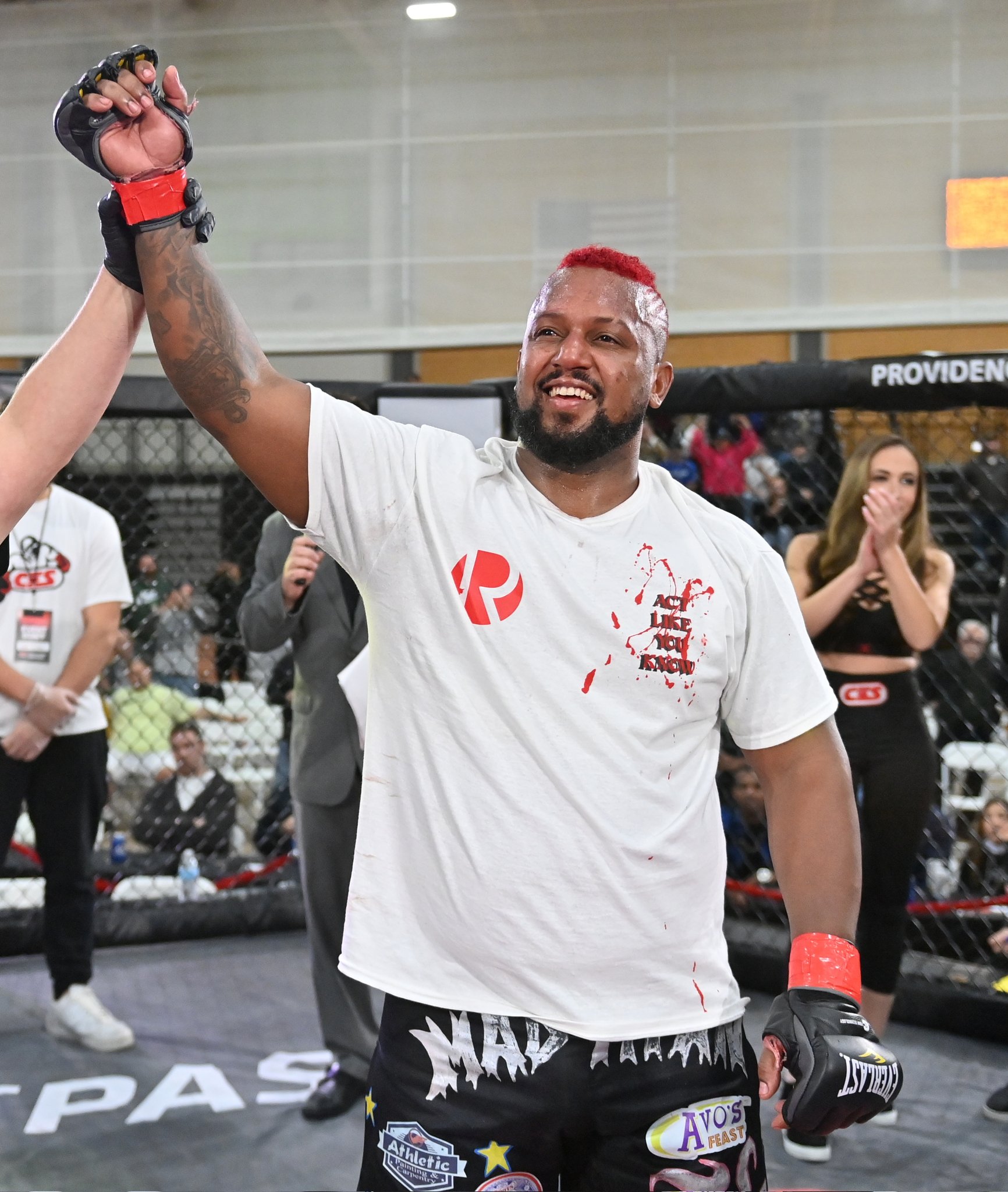 CES MMA photo courtesy of Will Paul
FOR IMMEDIATE RELEASE

Fighting in front of his hometown fans for the first time in more than two years, heavyweight Yorgan De Castro (7-3) of Fall River, MA, earned a 30-27, 29-28, 29-27 unanimous decision win over Danyelle Williams (8-7-1) in the main event Sunday of CES MMA 65 live on UFC FIGHT PASS® from the Providence Career and Technical Academy.

Having fought for the UFC five times in his career, De Castro now has his sights set on the vacant CES MMA World Heavyweight Title, which is now within arm’s reach following Sunday’s impressive performance.

De Castro dominated the opening round, peppering Williams on the ground with unanswered strikes to the point where referee Kevin MacDonald nearly stepped in stopped the fight, but Williams survived and looked better in round two before De Castro closed the show in the third. De Castro caught a sloppy kick from Williams, tossed him back to the canvas, and used his 266-pound frame to keep Williams subdued for most of the round until the two rose to their feet for one final surge in the closing seconds.

In the co-main event, former world champion Andre Harrison (22-2-1) of Long Island made quick work of Brazilian featherweight Mauro Chaulet (14-8), earning the victory due to a doctor’s stoppage at the end of round one. Chaulet came out with reckless abandon, firing haymakers from the hip, but the cool, calm Harrison withstood his opponent’s wild approach and landed clean, effective strikes throughout the opening round. Chaulet looked dazed as he retreated to his corner, and ringside physician Peter DeBlasio decided to call the bout after a quick examination between rounds,

With one quick, yet effective, overhand right to the temple, Long Island bantamweight Ashiek Ajim (5-1) earned his fifth victory in the CES MMA cage, stopping Florida’s Carlos Espinosa (6-5) at the 30-second mark of the opening round. Espinosa quickly rose to his feet following the overhand right that sent him crashing to the canvas, but he could barely keep his balance, prompting MacDonald to stop the fight.

Bantamweight John Douma (6-2) also looked impressive in his return to his hometown, submitting Oregon’s Tristan Lindi (2-3) at 2:24 of the opening round via D’arce choke, a smooth transition after starting the bout with effective combinations. Douma is now 4-1 with CES.

Also on the main card, Long Island middleweight Hugh McKenna (4-5) earned a big win over regional favorite Pat McCrohan (4-4), forcing the stoppage from MacDonald due to a relentless ground-and-pound attack at the 4:33 mark of the opening round. McKenna stunned McCrohan with an overhand right midway through the round, then wisely transitioned from strikes to submission attempts, and then back to strikes before MacDonald wisely stepped in and saved McCrohan from further damage.

In what may have been the fight of the night, rising lightweight prospect Nate Ghareeb (5-1) of Southampton, MA, continued his winning ways with a unanimous decision win over the tough Tom Pagliarulo (3-1) of Haverhill, MA, who took the fight on two days’ notice after earning his third career win on October 30. Ghareeb peppered Pagliarulo with calf kicks throughout the fight, so much so that he broke his own toe, leaving the canvas – and his opponent – a bloody mess.

Pagliarulo had his moments, but spent most of the final two rounds backpedaling to avoid further damage to his legs, thereby limiting his offense. Ghareeb earned the victory by split decision, 29-28, 28-29, 29-28.

Flyweight Tim Flores (3-1) of Hartford, CT, also won by split decision in the opening bout of the broadcast, defeating New York’s Matt Almy (4-5), 29-28, 28-29, 30-27. Flores did his best work in the final two rounds, closing out particularly strong in the third to earn the victory on the scorecards.

Providence Career and Technical Academy is one of New England’s premier technical high schools, providing students with both a high-quality academic education and state-of-the-art technical training. Students completing any of the nine available programs will graduate with a high school diploma and industry-recognized certification in their chosen field.