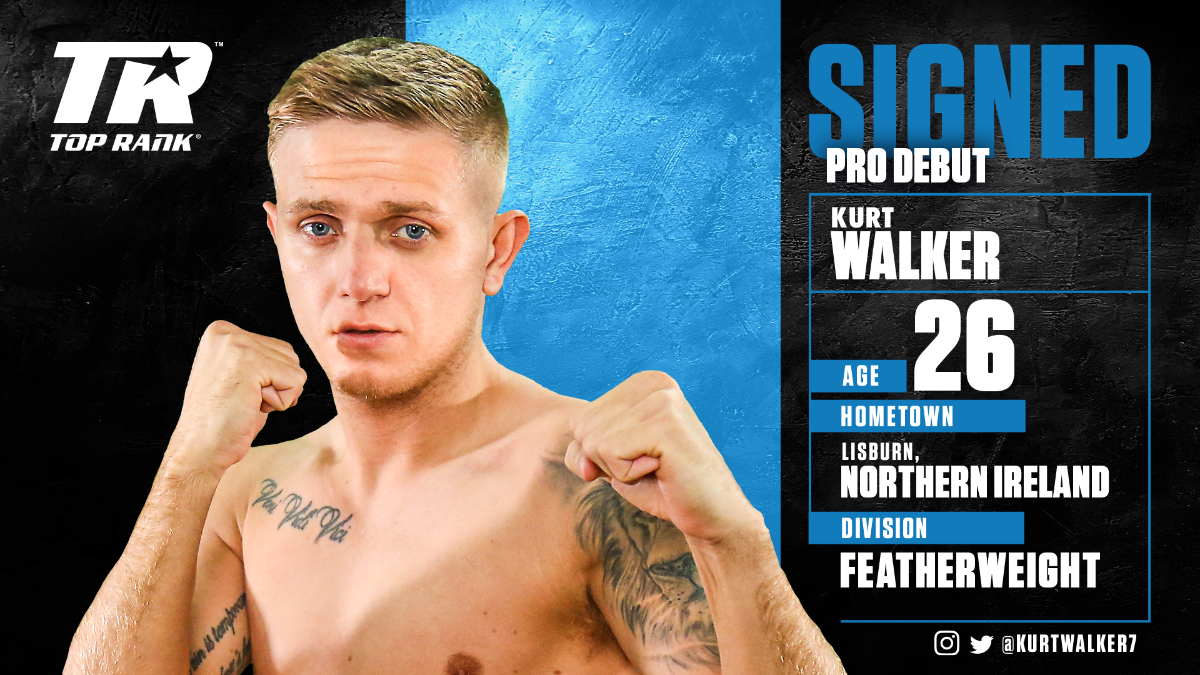 LAS VEGAS (Nov. 10, 2021) — Kurt Walker spent the better part of a decade excelling in the Irish amateur system, a standout run culminating in an appearance at the Tokyo Olympics. He now hopes to replicate that success in the paid ranks.

Walker, a 26-year-old native of Lisburn, Northern Ireland, signed a multi-year contract with Top Rank and is the latest European star to ink a deal with the promotional powerhouse. Walker is managed by Michael and Jamie Conlan, the Belfast brothers who had a front-row seat to his development. Their father, John Conlan, coached Walker as an amateur.

“Kurt Walker is someone who stood out at the Tokyo Olympics, as he has a devoted fan base back home and a style suited to the pro game,” said Top Rank chairman Bob Arum. “He has a great team behind him, and with his skills and demeanor, he can become a major star in the sport.”

Walker said, “Signing with Top Rank, the best promoter in the game, is a dream come true. This will help me achieve my goal of becoming a world champion. Seeing how Top Rank builds their fighters into superstars was something that appealed to me. I also want to thank Michael and Jamie Conlan for making this a possibility, and alongside Top Rank, I have the utmost confidence that my team will guide me in the right direction.”

Michael Conlan added, “Jamie and I are delighted to announce our first signing. We believe Top Rank is the ideal fit, especially given their commitment to building fighters on both sides of the Atlantic. I’ve trained alongside Kurt for many years, and his talent shined through in the gym and at the Tokyo Olympics. Although Kurt lost to Duke Ragan in Tokyo, they are now under the same promotional umbrella. That is a fight we’d love to make for him down the road.”

Walker and Ragan fought in the Olympic quarterfinals with a guaranteed medal on the line. Ragan, who is 4-0 as a pro, earned the 3-2 split decision. Before running into Ragan, Walker upset Uzbekistan’s gold medal favorite and 2019 World Championships gold medalist, Mirazizbek Mirzakhalilov. Walker established his amateur credentials with gold medals at the 2019 European Games and 2018 EU Championships, a silver medal at the 2018 Commonwealth Games, and three consecutive Irish Senior Elite titles from 2015-2017.