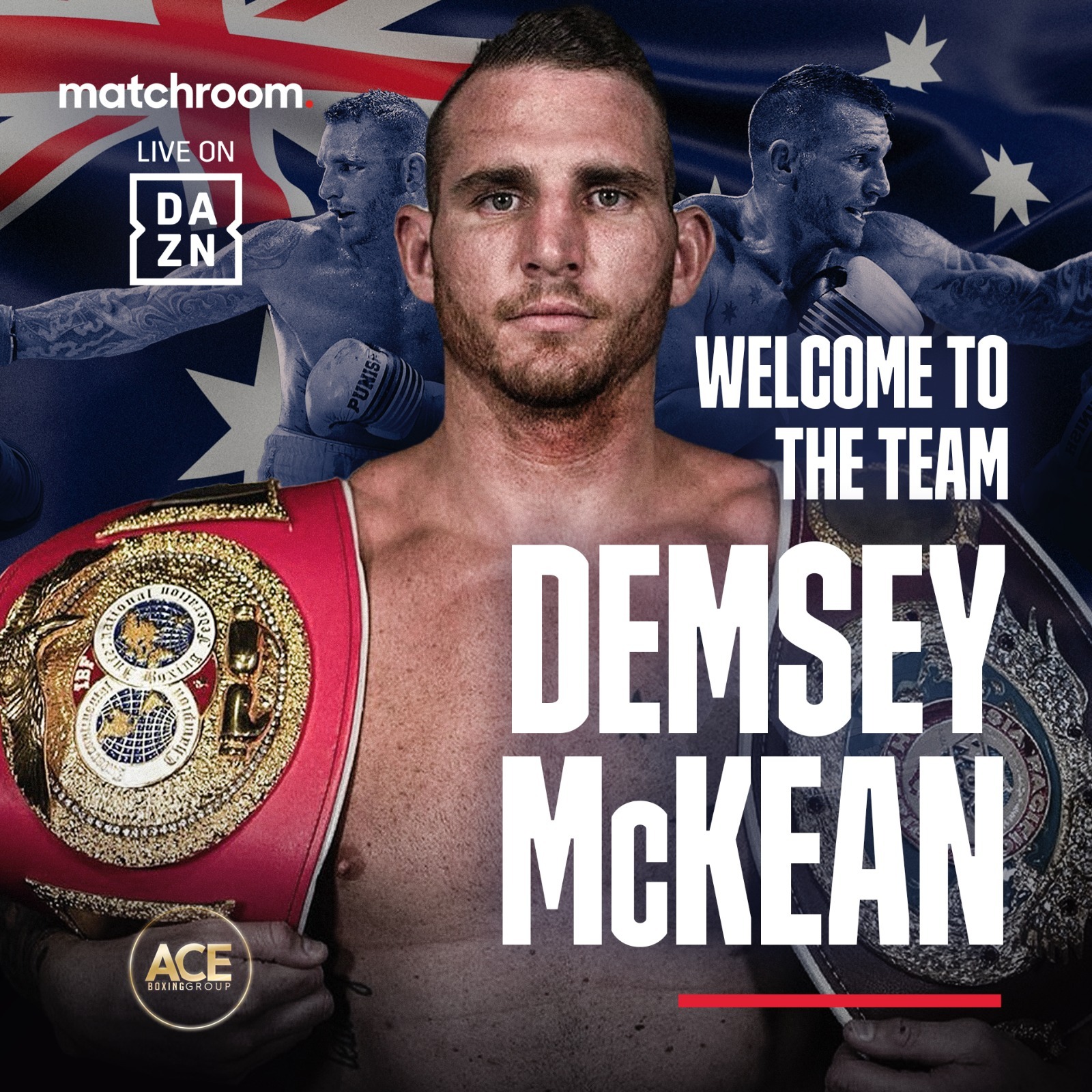 Demsey (19-0, 12 KOs) was used as a sparring partner by former Unified Heavyweight World Champion Anthony Joshua ahead of his huge showdown with Oleksandr Usyk at the home of Tottenham Hotspur in September before joining the WBC’s No.1 ranked Heavyweight Dillian Whyte at his Portugal training camp ahead of his cancelled fight with Otto Wallin.

“I am delighted on my recent signing and to join the Matchroom Boxing team and get back in the ring next week,” said McKean. “I’ve had a brilliant time over the last few months sparring with Anthony Joshua and Dillian Whyte but now it’s time to do it for real and I can’t wait to fight in America.

“Matchroom have big plans in Australia but it also gives me the chance to box all over the world including the USA and the U.K. I’m looking forward to staying active and to keep climbing the Heavyweight rankings, thank you to Eddie Hearn and Angelo DiCarlo and the Ace Boxing Group team for making this happen.”

“I’m very happy to announce Demsey as part of the Matchroom Boxing team as we continue our expansion into Australia,” said Matchroom Sport Chairman Eddie Hearn. “Demsey is 19-0 and now ranked No. 11 with the WBO and 12 with the IBF in the Heavyweight division and sits on the cusp of some huge fights. Whilst the plan for us is to begin staging shows in Australia in 2022, we plan on boxing Demsey all around the world starting in the States next week. I’m excited to keep him active and continue to raise his profile globally before we return home for a major fight in Australia.”

McKean’s first action with Hearn and Matchroom is part of a stacked night of action in Manchester, New Hampshire with a quadruple header of World Title action, led by Demetrius Andrade (30-0 18 KOs) defending his WBO World Middleweight Title against Ireland’s Jason Quigley (19-1, 14 KOs).

Murodjon Akhmadaliev (9-0, 7 KOs) defends his IBF and WBA World Super-Bantamweight Titles against Ronny Rios (33-3 16 KOs), it’s Mexico vs. Puerto Rico in the long-awaited showdown between WBC World Flyweight Champion Julio Cesar Martinez (18-1 14 KOs) and McWilliams Arroyo (21-4 16 KOs) and the fourth World Title bout on the bill is the second step on the path to crowing an undisputed women’s champion at 140lbs as Kali Reis (18-7-1 5 KOs) takes on Jessica Camara (8-2) for the WBA, IBO and vacant WBO straps.