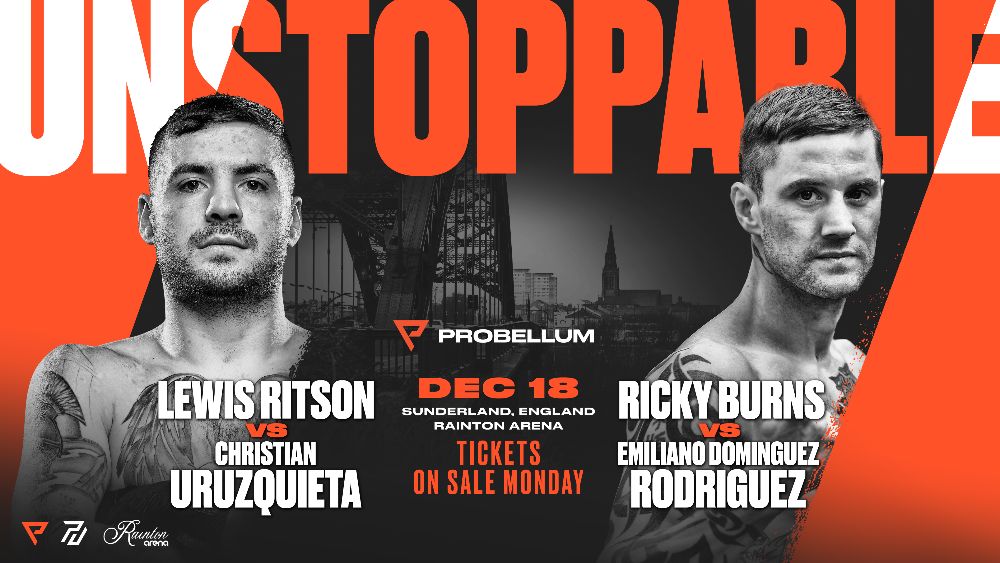 The event next month will be the first UK promotion by Probellum, a next generation sports company designed to blend promotion, media and content whilst supporting grassroots boxing.

Three-weight world champion Ricky Burns (43-8-1, 16 KOs) will return to action for the first time in over two years when he squares off with Argentina’s Emiliano Dominguez Rodriguez (26-9-1, 10 KOs).

Lewis Ritson (21-2, 12 knockouts) makes his highly-anticipated return, as the former British and WBA Intercontinental champion has his first fight under the Probellum promotional banner, taking on Mexico’s Christian Uruzquieta (20-4-2, 7 knockouts).

Some of the North East’s best fighters will be on the card too, including talented Mark Dickinson (1-0, 1 KO), and local hero Joe Laws (10-1, 5 KOs), plus Probellum will work alongside promoter Phil Jeffries to see the likes of former English title challenger Joe Maphosa (10-1, 1 KO), plus undefeated pair Terry Wilkinson (8-0), and Adam Cope (1-0) also involved on the bill.

“We’re extremely excited to head to Sunderland with an action-packed night full of massive names on December 18,” said Richard Schaefer, President of Probellum. “With the likes of Lewis Ritson, Ricky Burns, Thomas Patrick Ward and more all on the card, it’s certain to be a memorable atmosphere inside the Rainton Arena.

“It is our second big event in quick succession following our world-title double header Revolution card in Dubai one week earlier, so it means fight fans are being treated to two huge shows on opposite ends of the world in the space of just seven days.

“These are the types of stacked cards that people can come to expect from Probellum moving forward, so we can’t wait to give everybody an event to remember next month.”

Further news on the Probellum ‘Unstoppable’ event at the Rainton Arena will be announced in the coming days and weeks.