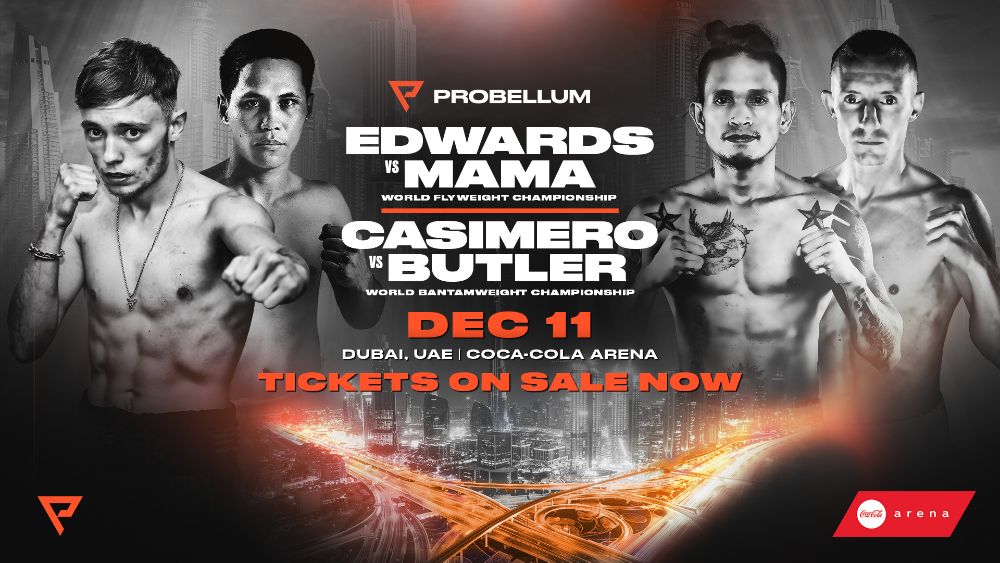 Los Angeles, CA – November 9, 2021 – Probellum will host a historic world championship double-header at the Coca-Cola Arena in Dubai on Saturday, December 11 with Probellum: Revolution – as Sunny Edwards defends his IBF flyweight title against Jayson Mama and John Riel Casimero puts his WBO bantamweight title on the line against the UK’s Paul Butler.

The event brings together some of the very best fighters from around the world in what is sure to be an action-packed night of boxing.

Undefeated Edwards (16-0, 4 knockouts) makes the first defense of his world title, taking on his mandatory challenger Mama (16-0, 9 knockouts), after the two men were originally set to meet in September in the UK before an injury postponed the clash.

Casimero (31-4, 21 knockouts) is back following his victory over Guillermo Rigondeaux in August, now squaring off with mandatory challenger Butler (33-2, 15 knockouts). Casimero is one of the most devastating punchers in the division who looks to keep his momentum going in his third world championship defense.

Four-weight world champion Donnie Nietes (43-1-5, 23 knockouts) will also appear on the card, as he looks to move a step closer to another championship in a world title elimination bout. He will be joined by unbeaten super-featherweight Archie Sharp (21-0, 9 knockouts), and former world title challenger Jono Carroll (20-2-1, 5 knockouts), who is coming off an important win against Andy Vences in September.

“We are delighted to finally announce plans for this incredible event in Dubai next month,” said Richard Schaefer, President of Probellum. “We made it clear from the offset that we have massive plans in store for Probellum, and this world title double-header shows just that.

“The two world title fights see John Riel Casimero face Paul Butler, while Sunny Edwards takes on Jayson Mama, and both of those bouts are set to be guaranteed excitement. With the likes of Donnie Nietes, Archie Sharp and Jono Carroll all competing too, fans will be treated to a night of non-stop action. We cannot wait for fight night and are proud to bring this historic event to the Coca-Cola Arena in Dubai.”