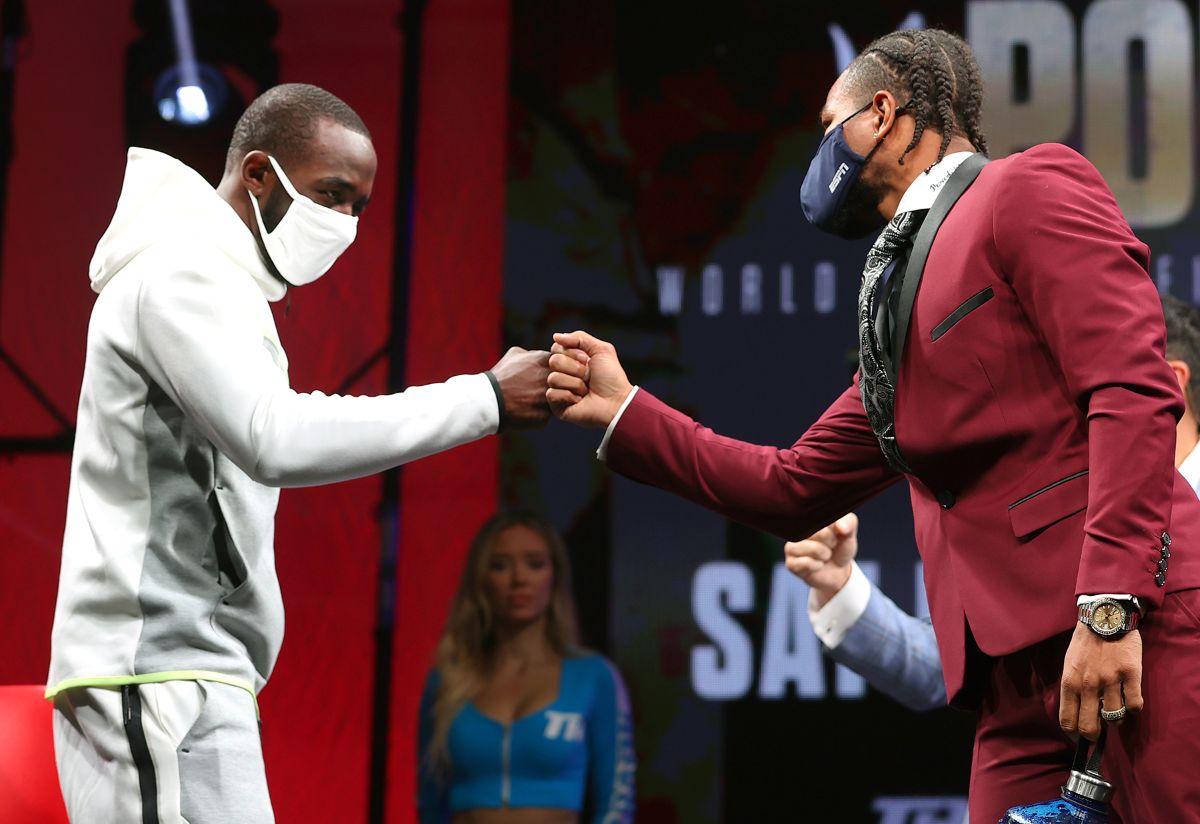 LAS VEGAS (Nov. 17, 2021)—Terence “Bud” Crawford and “Showtime” Shawn Porter didn’t need to hoot and holler to make their point. With fight day three days away, they were all business. The longtime acquaintances came up together in the amateur ranks in the late 2000s. At the time, Porter outweighed Crawford by more than 30 pounds. More than a decade later, the welterweight stars are finally crossing paths.

Crawford (37-0, 28 KOs), the three-weight pound-for-pound great, will make the fifth defense of his WBO welterweight title against Porter (31-3-1, 17 KOs) on Saturday, Nov. 20 at Michelob ULTRA Arena at Mandalay Bay in Las Vegas.

Presented by Top Rank and TGB Promotions, Crawford-Porter will be a Top Rank PPV exclusively on ESPN+ in the United States at 9 p.m. ET/6 p.m. PT. CLICK HERE to view the ESPN+ order page.

At Wednesday’s main event press conference, this is what Crawford and Porter had to say.

“I respect everything that Shawn does. Shawn is athletic, he can box, he can bang, he can move around in the ring, he can cut corners and take angles. I’m not going to sit here and say that I don’t respect anything that he does. I’m just going to say that I do a lot of things better than Shawn. I’m going to show him come Saturday.

“Once we signed that contract, the switch was already flipped and I can’t wait to go out there Saturday to display my talent and look good doing it. Until then, right now I’m just chilling, playing Call of Duty in the room by myself all day. I’ve been in the room all day isolating.”

“I don’t think there’s too much that I can say to Bud that’s going to change the way he thinks about himself and the outcome of this fight. He can’t look at me and say, ‘I’m going to beat your ass’ and I’m going to believe that, and he knows that, and he won’t dare to do it. I could say the exact same thing he said, and I believe it.

“Terence, you know better than I do that you’ve matured. I feel like people see your personality and your character right now more than they’ve ever seen, but I feel like I’m still correct in saying that when the wrong Tweet or Instagram post goes up, you can get upset.

“I’m relaxing, I’m drinking water and just biding my time. I am a showtime fighter, and I can’t wait for showtime on ESPN+ PPV. I’m a really even-keeled type of guy. I like things to be easy, and fight week is always easy for me.”

If you’re interested in accessing additional Top Rank imagery available for licensing beyond the photo link above, please go to the following event home pages to license our images:

For any concerns or questions regarding how Getty operates, please contact our Getty Images representative Mark Awad at mark.awad@gettyimages.com or support.na@gettyimages.com for assistance.