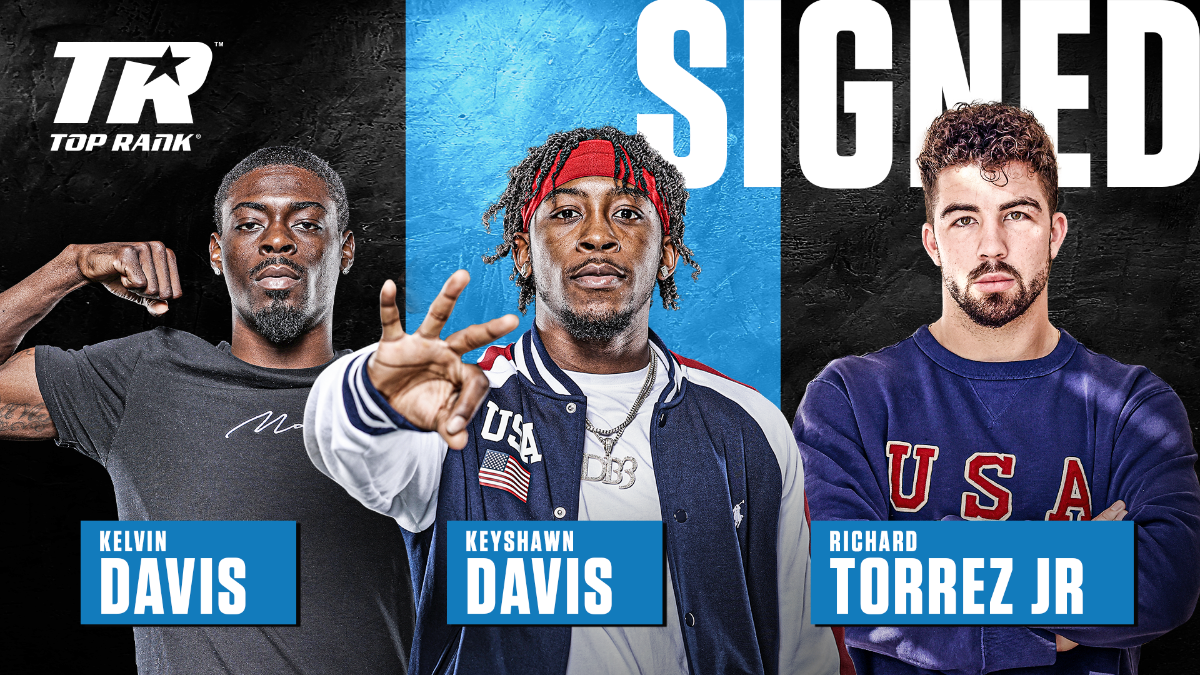 The Davis Brothers, from Norfolk, Virginia, will make their respective Top Rank debuts Saturday, Dec. 11 on the Vasiliy Lomachenko-Richard Commey card at Madison Square Garden. Keyshawn Davis will fight in a six-rounder on ESPN & ESPN Deportes (9 p.m. ET) as part of a televised quadruple-header that features the Jared Anderson-Oleksandr Teslenko heavyweight battle and middleweight Nico Ali Walsh in a four-rounder.

Torrez will have his pro debut in early 2022, with details announced in due course.

“Top Rank is proud to promote an outstanding group of fighters who also comport themselves with dignity outside the ring,” said Top Rank chairman Bob Arum. “Richard Torrez Jr. is a southpaw pressure fighter who will instantly become a heavyweight fan favorite. I can’t wait to see the Davis Brothers, both of whom have valuable experience as pros and will shine at Madison Square Garden on December 11.”

Keyshawn Davis (3-0, 2 KOs), pegged by many experts as one of the sport’s elite young talents, returned to the amateurs following three professional fights in early 2021. The 22-year-old earned silver medals at the Tokyo Olympics, 2019 World Championships and 2019 Pan American Games, falling in the gold medal match each time to Cuba’s sensational Andy Cruz.

Keyshawn and Kelvin Davis are trained by Brian McIntyre, who has a star-studded roster that includes pound-for-pound king Terence “Bud” Crawford and former junior lightweight world champion Jamel “Semper Fi” Herring. Keyshawn Davis hopes to follow in the footsteps of another Norfolk great, the late Pernell “Sweet Pea” Whitaker, a four-division champion who won his first title as a lightweight. He also draws inspiration from a group of Olympic medalists who turned pro under the Top Rank banner and went on to win world titles: Floyd Mayweather Jr., Oscar De La Hoya, Michael Carbajal, and Shakur Stevenson.

“When I look at all the great fighters Bob Arum promoted, it’s an honor to continue that legacy,” Keyshawn Davis said. “I know it will be my time one day, so I’m going to trust the process, develop my skills, and work towards becoming a world champion. The Davis Brothers are coming to make their mark.”

Kelvin Davis (2-0, 1 KO) last fought May 8 on the Canelo Alvarez-Billy Joe Saunders card and defeated Jan Marsalek by unanimous decision. A 6’1 southpaw, the 24-year-old promises to be a stylistic challenge as a 140-pounder.

“Joining Top Rank with my younger brother is a thrill, not only for me, but for our entire family,” Kelvin Davis said. “I’ve been grinding in the gym since my last fight, and I am ready to put the junior welterweight division on notice.”

The 22-year-old comes from a proud fighting family. His father and trainer, Richard Torrez Sr., was an accomplished amateur boxer who had more than 250 fights and advanced to the semifinals of the 1984 U.S. Olympic Trials. His grandfather, Manuel Torrez, founded the Tulare Athletic Boxing Club in the early 1940s. That gym helped hone the youngest Torrez’s talents and led him to a meteoric rise through the amateur ranks.

“After the Olympics, I took my time in deciding my professional future, and I was impressed with what Top Rank had to offer,” Torrez said. “I want to build something in this sport, and Top Rank has a long history of developing young fighters into champions.

“I am also thrilled to be joined at Top Rank by my Olympic teammates. Duke, Tiger, Troy, Keyshawn, and I grew up together as amateurs. I can’t wait to see what the future holds.”

Torrez was a U.S. National Championships gold medalist in 2017 and 2018, in addition to capturing three U.S. Youth National titles from 2014-2016. He became the first U.S. Olympic Super Heavyweight to medal since Riddick Bowe took home silver in 1988. Torrez had a 154-10 amateur record, a run that ended in Tokyo with a competitive decision loss to longtime rival Bakhodir Jalolov, who is 8-0 as a pro.

At 6’2 and roughly 230 pounds, Torrez is a volume puncher who has long thrived against taller and naturally larger fighters. Outside the ring, he is a Renaissance man. He was valedictorian of his class at Mission Oak High School, played multiple varsity sports and was president of the school’s chess club. The straight-A student who climbed to amateur boxing’s apex now sets his aim on the professional game.