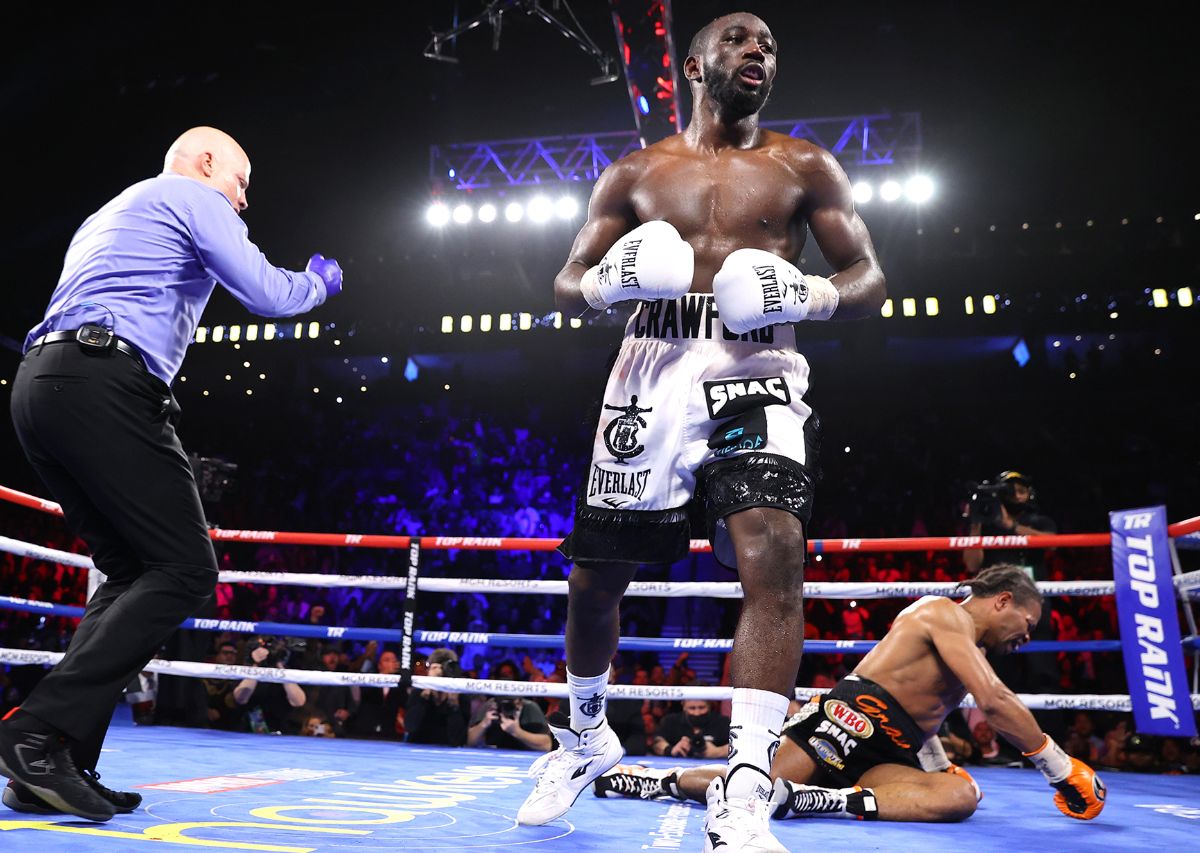 LAS VEGAS (Nov. 20, 2021) — The pound-for-pound king notched his career-defining victory. Terence “Bud” Crawford knocked out “Showtime” Shawn Porter in the 10th round to retain his WBO welterweight world title in front of a sold-out crowd of 11,568 at Michelob ULTRA Arena at Mandalay Bay in Las Vegas.

Crawford (38-0, 29 KOs) made the fifth defense of the title he won in June 2018 and was presented with the stiffest test of his illustrious career. Porter (31-4-1, 17 KOs), who has fought every elite welterweight of this era, made things uncomfortable on the inside.

“(I figured him out in) Round 1,” Crawford said. “I figured that I had the reach and he had to take chances, and he did what he normally does. He tried to maul and push me back, but I used my angles and I pushed him back at times as well. Shawn Porter is a slick fighter. He was doing some things in there and made me think.

“I love him. Shawn Porter is a real good friend of mine. I didn’t really want to fight him. We always said we would fight each other when the time was right and I guess the time was right for this fight to happen. I tried to fight the other champions in the division, and that didn’t happen, so I went to the next best thing.”

Porter led 48-47 on all three scorecards after five rounds, but Crawford took control in the second half of the fight. After a dominant ninth round, Crawford scored a pair of knockdowns, and Porter’s trainer and father, Kenny Porter, stopped the fight.

My timing was off and he wouldn’t allow me to get my rhythm,” Porter said. “He’s the best out of everybody I have been in the ring with.”

At the post-fight press conference, Porter announced his retirement. Crawford’s future, meanwhile, remains to be seen.

Middleweights Esquiva Falcao (29-0, 20 KOs) and Patrice Volny (16-1, 10 KOs) were headed for a distance fight until a brutal headbutt opened a gash above Falcao’s left eye in the sixth round. The fight went to the scorecards, and Falcao prevailed by technical decision (58-56 Volny, 58-56 Falcao and 58-57 Falcao) in an IBF title eliminator.

Falcao, a 2012 Olympic silver medalist for Brazil, is now in line for the winner of December’s title unification fight between WBA champion Ryota Murata and IBF kingpin Gennadiy Golovkin.

Alimkhanuly dropped N’Dam in the third round and continued marching forward. N’Dam gamely returned fire, but Alimkhanuly was not deterred. Whenever N’Dam landed a punch, Alimkhanuly shook his head and continued the assault. Late in the eighth round, a multi-punch combination froze N’Dam in the blue corner, prompting referee Kenny Bayless to end the carnage.

Alimkhanuly said, “I am ready for a world title shot next. ‘Qazaq Style’ is about to take over the middleweight division. Any champion, it doesn’t matter.

“I must give credit to N’Dam, a tough former champion who took a lot of punishment.”

Lightweight phenom Raymond “Danger” Muratalla (13-0, 11 KOs) became the first man to knock out out Elias Araujo (21-4, 8 KOs), finishing things off in the fifth round of a scheduled eight-rounder. Araujo was not seriously hurt at the time of the knockout, but referee Allen Huggins halted the fight due to an accumulation of punishment.

Adam “BluNose” Lopez (15-3, 6 KOs) was just getting started. After dominating the first two rounds against Adan Ochoa (12-2, 5 KOs), the fight was ruled a no-decision due to an accidental headbutt that opened a cut above Ochoa’s right eye. Ochoa sustained the damage in the opening round and was unable to continue.

Lopez said, “I landed some good shots and was busting him up. He was looking for a way out.

“This is so frustrating. I want to get back in the ring as soon as possible. I’m still ready to take on anybody in the featherweight division.”

Recent U.S. Olympian Tiger Johnson had an eye-opening professional debut, stopping Antonius Grable (3-2-1, 3 KOs) in the fourth round of a welterweight bout. Johnson suffered the first cut of his career before knocking down Grable with a right hand in the fourth round. Referee Allen Huggins stopped the fight after a follow-up flurry pinned Grable against the ropes.

Johnson said, “I’m coming. The cut was not an issue for me, and I did my thing against a solid opponent in my professional debut. It was an honor to debut on a big pay-per-view card in Las Vegas, and I can’t wait for my second professional fight.”