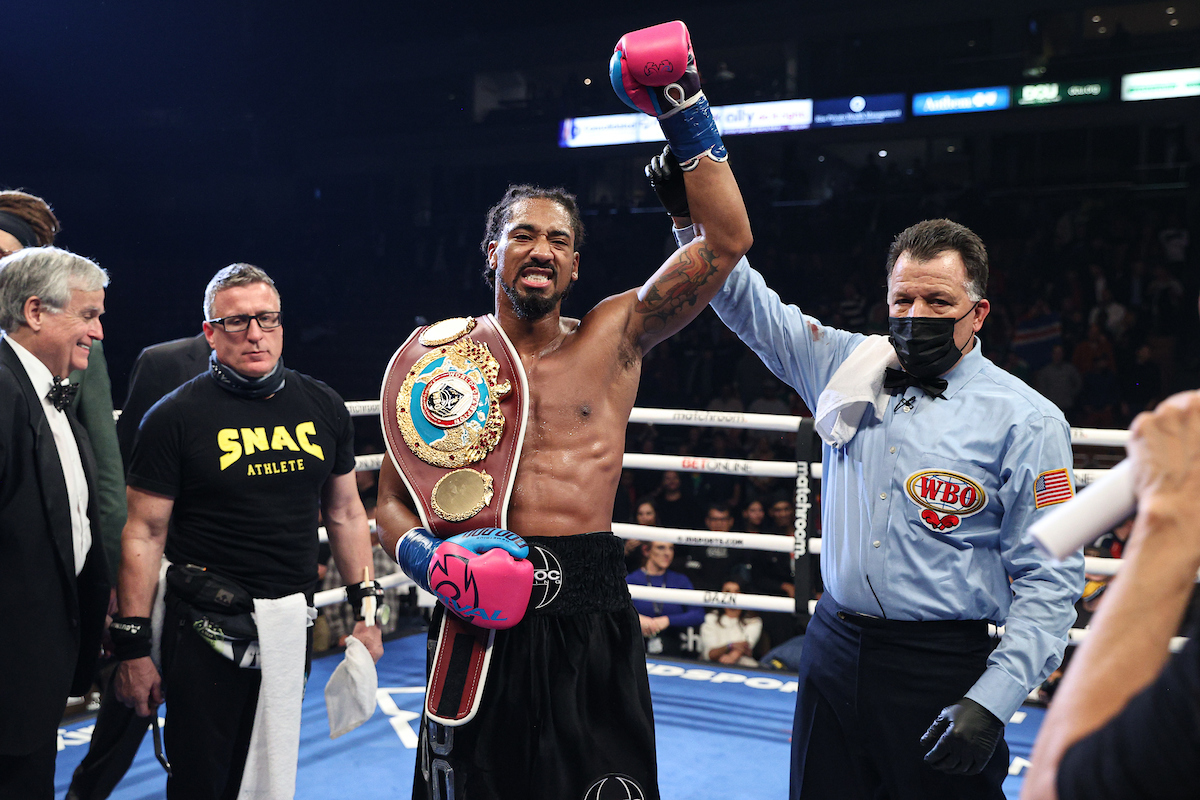 Demetrius Andrade delivered the explosive KO win he promised as he destroyed Jason Quigley in just two rounds of the fifth defense of his WBO World Middleweight title at the SNHU Arena in Manchester, New Hampshire, live worldwide on DAZN.

Andrade started with his customary fire, with a blistering attack at the end of the first round flooring a stunned Quigley – another challenger to hit the canvas at the start of an Andrade World title defense.

This time though, Andrade would not let the fight go deep, and two more knockdowns saw the referee save the Irishman from further punishment after 2.24 of round two – Andrade delivering the sort of thrilling display of power, spite and precision that he’s been told to do to land the big fights he craved.

“I did what I said I would do, I looked good and felt good,” said Andrade. “I delivered a message tonight – what’s next and who’s next.

“Every time I get in the ring, I do something different, and I can do it all, and whatever I need. Patience. So many times, you see people get knocked down and then they knock the other guy down. So, I keep patient in there and wait for the shots to land. But you asked for KOs, and I give you KOs so let’s go.

A wild start to the long-awaited clash between WBC World Flyweight champion Julio Cesar Martinez and interim champion McWilliams Arroyo was sadly cut short after an accidental headclash left Arroyo with a nasty cut under the eyebrow of his right eye, and the referee was forced to call a No Contest.

Puerto Rican Arroyo started in stunning fashion, flooring Martinez early in the opening round, but the champion exacted immediate revenge and put Arroyo on the canvas at the end of the round. The Mexican put Arroyo down once again in the second round before the unfortunate clash of heads that ended a contest that was more than living up to its billing.

Murodjon Akhmadaliev retained his WBA and IBF World Super-Bantamweight titles with victory over game late-replacement Jose Velasquez. ‘MJ’, who was due to meet WBA mandatory challenger Ronny Rios, but Velasquez stepped in after Rios was ruled out with COVID and the Chilean showed he belonged on a big stage and will be seen again – but Akhmadaliev was also comfortable throughout and banked 12 more rounds in just his tenth pro outing and landed the win 119-109 on all three cards.

There will be an undisputed champion at 140lbs in 2022 – and it is Kali Reis who will face Chantelle Cameron for all the belts at Super-Lightweight as she edged out Jessica Camara via split decision. American Reis and Canadian served up royal entertainment for the fans in keeping with the recent run of high drama women’s world title fights, and Reis got the nod on the cards (97-93, 94-96, 97-93) and then faced-off with Briton Cameron in the ring afterwards to start the countdown to their battle next year.

“I thought I won the fight,” said Reis. “Jessica put up a brilliant fight, but I do feel I did the cleaner work. I’m so happy and I can’t wait to fight for the undisputed fight next year, that’s my dream.”