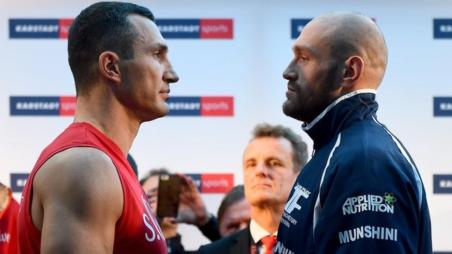 We are less than 24 hours away from Klitschko vs. Fury.  Let’s take a look at the tale of the tape:

The 27-year-old Fury, (24-0, 16 KOs) from United Kingdom, has talked the talk and now gets his shot at fame.  He enters the fight a winner of his last four by stoppage.  His competition includes Christian Hammer, Dereck Chisora (twice), Steve “USS” Cunningham, and Kevin “Kingpin” Johnson.  Fury has gained quite a following in the UK with his biggest fights (with the exception of Cunningham) taking place there.  If you don’t already know, Fury serves as one of the biggest mouthpieces in boxing. He’s in the same class as Antonio Tarver, Floyd Mayweather, and James Toney…. more Toney than Tarver as his comments are quite often R-Rated.

On facing Klitschko, Fury says, “Klitschko has as much charisma as my underpants – zero.  You go on – you’re a sports psychologist, you speak 37 different languages, so what?  You’re still a robotic person. You’re still not exciting and fun to watch. I am the new blood in the division, you are an old man.”

“It’s a personal mission for me to rid boxing of a boring person like you,” he said. “I’m interested in all of them belts you’ve got on there. I’m interested in breaking your face in. You’re boring.  I want to rid you out of the heavyweight division.”

After a loss in 1998 (Puritty), followed by two others in 2003 (Sanders) and 2004 (Brewster), Klitschko and new trainer Emanuel Steward began the process of rebuilding Klitschko.  Steward took over shortly before the loss to Brewster and noticed some things from that fight that could be fixed.  Wladimir hasn’t looked back since.  Johnathon Banks took over as trainer after Steward’s death and Klitschko is 6-0 under his guidance.

“I believe Tyson Fury is really meaning what he is talking about and he is definitely not coming here on October 24 just to be present and be on the canvas. No, he came here to win the championship fight.

“This guy is so entertaining. He sings, he dances, and he is a cool dude. He does different things that people like – or hate. Some people adore you.  Some people say they can’t stand you, which is good.”

I think we are finally going to get some heavyweight bouts that will entertain the fans, even if they come more from the press conferences than the actual fights.  I expect the fight itself to be a decent scrap.  We saw some signs of age in Klitschko’s last fight with Bryant Jennings.  Yet, it was still a fight that was dominated by the champion.

“Batman” Fury is young and based on his last fight with Jennings- Wlad might not have it anymore.  He’ll be 40 years old a few months after the fight.  He’s been there and done that.  On the other hand, Tyson hasn’t quite hit his ceiling yet.  But that’s the danger for Wlad in his chase for Joe Louis.

“Batman” Fury has to impose his size on Klitschko.  Klitschko has the best jab in the division.  He’s used to jabbing and punching downward.  However, how does he deal with having to throw it upward at a boxer who is taller than he is?  Fury must attack Wladimir’s body- especially if they tie up.  Wladimir can’t fight on the inside and this is where Tyson can wear his 39-year-old frame down.

Wladimir Klitschko has not lost a fight in 11 years!  Okay, let me repeat that.  Wladimir Klitschko has not lost a fight in 11 years!  That is amazing!  Klitschko is like ex-Orioles pitcher Scott Erickson.  Erickson only used two pitches, a slider and a fastball.  He was a good pitcher because he had great movement on each and he knew when to throw them.  Klitschko is mostly the same.  He has the jab and right hand combo.  He has the jab and left hook combo.  Those two combinations are pretty much the only he throws.  However, Wlad knows when to throw them and at the proper velocity.  Can Klitschko get his left hook and right hands off on a bigger man?  I’m curious to find out.

I think “Batman” has gotten under his skin to the point where Wlad wants to make a statement.  I think “Batman” Fury must try to make his statement early in the fight.  The first four or five rounds may tell the story in this one.  Why do I call him “Batman” you ask?  See the video below from the hilarious press conference.  I expect more from him at the final presser:

My key question:  Can “Batman” Fury stay outside of Klitschko’s jab and land his own with his reach advantage?

Another thing, Wladimir is always in shape, so I won’t touch that area.  Tyson is another story. For example, he weighed 254 for Cunningham, 264 for Chisora, and was closer to 280 for Joey Abell.  Fury seems to gas a bit in fights and we will see how much shape he’s in for his biggest fight.  Come in at 270 and he gasses and is stopped in the middle rounds.  If he comes in light (240s), then maybe he will have left something in the gym.  This could be a key factor.

I think this is a 50/50 fight.  Part of Klitschko’s game is leaning on the smaller fighter and putting his weight on him when they are tied up.  Actually, it’s a big part of Wlad’s game.  If you go back 12 or 13 fights, you’ll see that he’s done it to just about every opponent.  He won’t be able to do that with “Batman” Fury.

This is a tough one to call.  I’m calling the upset!  Give me “Batman Fury” over Klitschko by UD in a decent heavyweight fight.  He will call out Deontay Wilder for unification afterwards.

This fight starts with the press conference.  If you think Shannon Briggs and his “Let’s Go Champ!” videos are funny, I have a strange feeling that Fury has something up his sleeve to rival Briggs.  Fury’s comments on Twitter and media outlets have me anticipating a great press conference and media call.

Has Tyson Fury caught Wladimir Klitschko at the right time?  If you watch his fight with Jennings, many believe Wlad’s timing and reflexes have slipped enough for this to be an even fight.

Tyson Fury is taller and has a longer reach than does Wladimir Klitschko.  He’s much younger and he fights orthodox as well as southpaw.  He must have the better jab through the first couple of rounds or this one could be over.  He also needs to be more active than the old man is.  Fury has more tools and moves more fluid than Klitschko.

One key question is can he impose his size on Klitschko?  Another question is does he have enough skills to keep Wlad off him and from scoring big punches?

Wladimir has come a long way.  He knows himself after being undefeated for 11 years.  He’s adopted a more defensive approach and looks for openings to score.  I don’t expect anything different in this fight.  Klitschko will try to be safety-first and not be caught with a straight shot from Fury.

One thing that can disrupt Wlad is if Tyson switches from right to left to right, he can change his angles to confuse Wlad.  The switch-hitting can also get Klitschko prone or out of position so that Fury can strike.

Most experts have a 50/50 fight.  I don’t.  Wlad has more experience, he’s the harder puncher, and he has the better jab.  Everyone is talking about Fury’s height.  However, has Fury fought anyone as big as Klitschko?  Fury has some tools and they’ll allow him to survive until the mid-way point.  I can’t see him going further than that.

Klitschko is going to get this guy out of there before the seventh round.  If he can’t get Wilder next, then…. LET’S GO CHAMP!