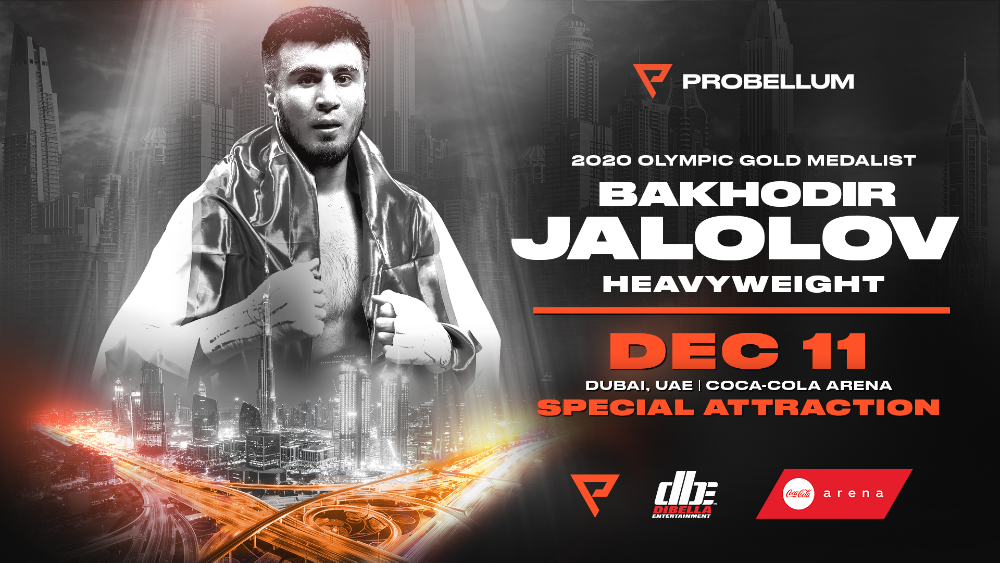 The unbeaten Uzbekistani fighter will compete at Probellum’s inaugural event in Dubai next month, making his first appearance since winning super-heavyweight Gold at the Tokyo Olympics, in association with DiBella Entertainment.

The reputation of Jalolov, 27, continues to grow, and he will now showcase his talents on a card which includes two world title bouts.

Having won Gold at the 2019 World Championships, Jalolov triumphed once again at the 2020 Olympics, which were delayed by a year due to Covid-19, beating USA’s Richard Torrez on points.

“I am very excited to return to my professional boxing career, this has been my priority as it contains the main part of my long-term goal after the Olympics,” said Jalolov. “To fight in Dubai is an added bonus and there is a responsibility for me to be at my best because I know that I already have a lot of fans there and many of my Uzbek and international followers will attend the event.”

Vadim Kornolov, Jolalov’s manager, added: “We are very excited for Bakhodir Jalolov to be a part of a major event in Dubai. This will be Jalolov’s first professional fight after his success in the Olympics and we are looking forward to him making a statement that the fans will remember.”

“With crunching power and unusual agility for a man of his size, this future world champion is poised to rise up the heavyweight rankings in 2022. I’m pleased and grateful that he will resume his pro career on December 11, in Dubai, at Probellum: The Revolution, the company’s loaded inaugural event.”

“We’re absolutely delighted to add Bakhodir to what was already a brilliant card,” added Richard Schaefer, President of Probellum.

“Not only is Bakhodir an Olympic Gold medalist, he is also undefeated in his career to date, and we are looking forward to watching him in action at the Coca-Cola Arena. The fans attending this event will undoubtedly enjoy some top-quality fight action.”

Tickets for the event are now on sale in-store at Virgin Megastore and online via Coca-Cola Arena and Platinum List.